Fuzzysurf took their pop-rock to another level with ‘Sweet Tooth’

Fuzzysurf took their pop-rock to another level with ‘Sweet Tooth’ 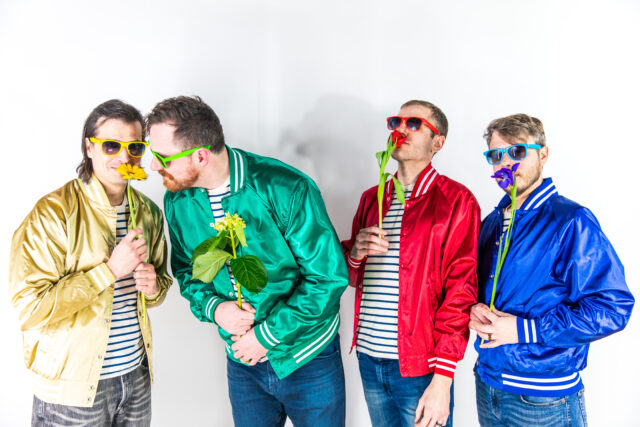 All December, Radio Milwaukee is paying tribute to our favorite Milwaukee releases of 2020 and speaking with the musicians who made them. This is Milwaukee Music’s 20 of 2020, presented by Planned Parenthood of Wisconsin.

Hands down one of my favorite records of this year was “Sweet Tooth” by Fuzzysurf. So, I was more than delighted to sit down with the entire band for this interview. Sean, Corey, Mike and Ben not only shared with me the story of the creation of this great album, but also shared with me some of their favorite moments of this year.

I asked the guys about the creative musical and visual concepts around the album. Sean let me know that while he comes to the table with songwriting, the rest of the fellas take these ideas from concept to end product. Mike shared with me a story of a tour date where Sean gave the rest of the band the demos of what would become” Sweet Tooth.” Mike said there were somewhere around 12 songs in this demo and they immediately knew they had their next album. Additional instrumentation, creative concepts and visual elements all come together after these demos have been passed around the band. The end result is the album we celebrate today.

“ There’s never gonna be a best time to do it.”

The band knew once spring of 2020 hit, that they were going to be doing things much differently with releasing this album. Their previous album “Fuzzy and The Surfs” had received critical acclaim and made many top lists in 2019, but things are different now in 2020. Plans for touring, summer festival dates and a record release show were all scrapped, and the band focused their efforts towards video and online creative output. This paired up well with plans the band already had to create a very visually rich multimedia experience with the release of “Sweet Tooth.” This album had more associated music videos than any album they released in the past. This experience created a new process for them to share this album in a fun new way.

“We want to make it fun and accessible for people.”

Creating music videos was nothing new for the band, but with the limitations 2020 brought they found creative liberty in these new restrictions. This helped to make this album more accessible than any album they put out in the past, and the band told me they received a lot of great feedback from fans and the community online.

Online was also a place of music discovery for the band this year. I spoke with every member about their favorite projects of 2020. Releases from Field Report, You Win!!!, The Keystones, Valerie Lightheart and GGOOLLDD made their personal favorites list.

The group has already teased the release of a new song and (spoiler alert) another new album for 2021. I personally am very excited to see what comes from this group next. They continue to master their songwriting craft with the release of “Sweet Tooth” and are starting to reach into new conceptual territory that brings their pop-rock sound to another level.

You can listen to the full interview with the band here and I strongly encourage you to purchase this album from their band camp page. You won’t regret having this one in your music collection 10 years from now.

Milwaukee Music’s 20 of 2020 is presented by Planned Parenthood of Wisconsin.