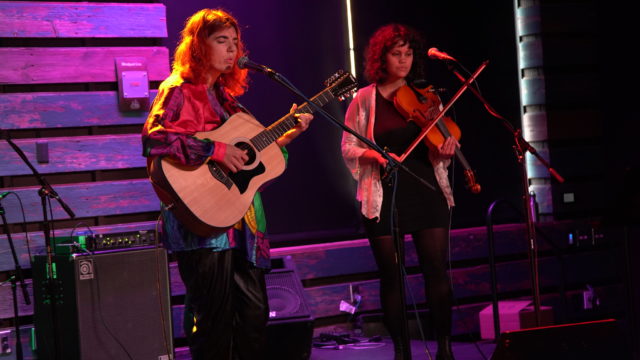 This week on 414 Live, we were thrilled to welcome station favorite Kendra Amalie for a particularly special show. The performance doubled as her Milwaukee release show for her new record “Intuition,” a heady, deeply moving psychedelia album that often seems to be broadcasting between worlds. She creates paintings through sound.

Amalie chats with Jordan Lee about her long journey to Milwaukee and the unique, textural quality of her music. Below you can stream the interview and the performance, where she’s joined by a band that includes Radio Milwaukee’s own Amelinda Burich.

A sweeping introduction to an artist deep into their practice, Kendra Amalie’s Intuition is a star map to a new and developing sound space. An exploratory and (sometimes) shredding finger-style 12-string guitarist (both acoustic and electric), band leader, synthesist, new media creator, and experimental producer, the Wisconsin-based musician is also a songwriter occupying an ethereal zone between galaxy-brain cosmic transmissions and deep, personal expression.

There’s a concept and narrative arc to Intuition, too, the action moving from underwater locales to boat to city to global consciousness to farmland to the etheric plane and back to water. But the movements are equally a guide through the world(s) of Kendra Amalie and a culmination/transition/next step following a decade-and-change of cassettes and ambitious projects including Names Divine, 11:11, and a range of directions in collaborative improvised music and solo sound work. Shifting her music-making energies over the past several years, Intuition is the sound of a powerful new voice in focus.

The opener (and first single) “Breathe Underwater” is both an invocation and a headbanger, and–like every track on Intuition–almost nothing like any other track. Both rigorous and open-formed, Intuition contains multitudes, from the hypno-noise/freak-out/grace of “Become the Light” to the 12-string meditation “Improvisation For Mark Hollis,” from the psychedelic realizations of “Facets of a Holy Diamond” to the pedal steel-touched “Stay Low.”

Recorded with friends in her shed in Saint Francis, Intuition’s band included a core rhythm section of drummer Victoria Robison and bassist Sam Cook, with remote support from Taralie Peterson (cello), Al Moss (pedal steel), Peter McLaughlin (drums) and Jayve Montgomery (oboe), alongside the mixing effort of long-time collaborator Brian J. Sulpizio in Chicago. The live iteration of the album is more shape-shifting, encompassing solo performances accompanied by motion-controlled synths as well as more fully supported by a corporeal rock band. Intuition is a sound-based cross-section of a larger body of work. An arrival and a destination, Intuition is also surely a stopover, too. Meet Kendra Amalie.