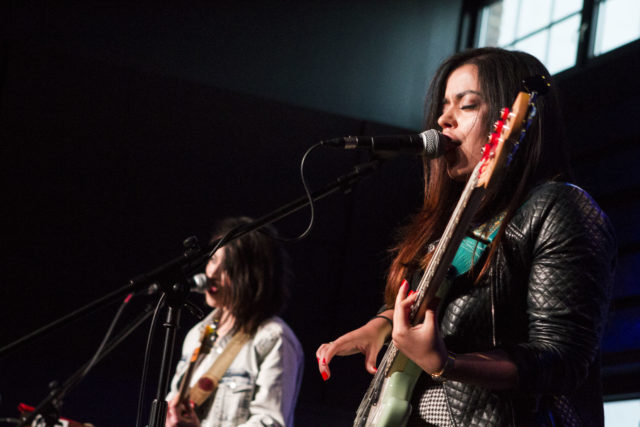 This week featured a performance and interview with Vic & Gab. We were excited to welcome Vic & Gab in advance of their farewell show on Halloween Night at the Pabst Theater.

In case you missed the session, you listen to it in the player above!

In a recent interview with 88Nine the sisters told us they will keep making music together — with a new name, new album and fresh sound. They expect to unveil the name and music early next year.

Vic and Gab are a song writing sister duo who play mesmerizing, grooving and powerfully catchy indie pop. The band took off in early 2011 with an opportunity to have a song featured on MTV’s fleeting teen series Skins and have since made a momentous amount of headway in their career.

Hard at work since the release of their EP Bridges and Guns in March 2012. Vic and Gab have played significant festivals like Summerfest, Vans Warped Tour and Midpoint Music Festival. The band has opened for acts like An Horse, The Features, Low, Willy Moon, Dessa and Smoking Popes among others. One of the bands culminating moments was playing at President Obama’s Re-Election Rally in front of over 18,000 people.

The girls have created a buzz in their home town Milwaukee wrapping up 2012 with a nomination from RadioMilwaukee Music Awards for Album of the Year and Band of the Year. Bumping elbows with bands like Field Report and Jaill the band also made the Shepherd Express list of The Essential Milwaukee Albums of 2012.