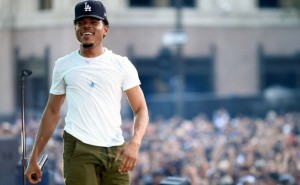 Hear all 5 Songs We Can’t Stop Listening To, including Chance the Rapper and Craig Finn talking about their picks.

Each week we have a guest artist come onto the program and tell us about one song that they love. This week our guest is Chance the Rapper.

Justin Barney: “Chance, what is one song that you can’t stop listening to?”

Chance the Rapper: “There is a song called ‘Melodies From Heaven’ by Kirk Franklin. There is the modulation in it. There are several key changes that just make listening to it each time feel like a level up. You know what I’m saying? And you realize like, you know how people say ‘Different day, same sh*t.’? It’s like ‘New key, same changes.’

“It shows you what growth means and how growth is a cycle. I feel like that song always lifts me from where I am, and always makes me feel like I’m doing something better, something new. So this song is not going away, I’m probably going to listen to this song forever.”

Have you ever had to say something that was difficult, or just painfully honest, so *when you say it you kinda just sing the line and pretend that what your saying is much lighter than it really is*

John Grant’s sentiment is very honest in this song. It’s an expression of love. But it’s an expression of love, but it’s kind of silly. It’s like he wants to be sweet, but doesn’t want to get all ooey-gooey about it. So when he finally gets to the chorus it gets really big, and these background singers come in with their shooby-doo bap bap’s and kind of ham it up and he sings that everything that is great in the world is disappointing compared to this person.

There are many things that this song is, but it is definitely not disappointing.

When Chairlift started as a group they said that they wanted to make background music for haunted houses. Now this song is definitely not something that would play behind you at a haunted house, but I think that conceptually they have a point here. Let me explain it here. When you are at a haunted house the excitement comes because you don’t know what is around the corner. What will happen next? This song, “Ch-Ching” holds true to that concept.

Something new is always around the corner in this this song. At first its these synths and whistles into, Caroline Polachek vocal acrobtics, drums panning from ear to ear, a huge hook with a mysterious string of number string of numbers, and there is this part here she leans in an whispers that will raise the hairs on your neck.

It’s not as scary as a haunted house, but it is still going to leave you short of breath.

We have been hearing a lot of “Bad Blood” this year. *Plays Taylor Swift*. I mean a lot *Plays Ryan Adams version* But this song is no Taylor Swift cover song.

This is Nao. She’s a British R&B vocalist who grew up listening to John Coltrane and Miles Davis, got a degree in Vocal Jazz at the prestigious Guildhall School of Music and Drama, and has done backup vocals with the legendary group Pulp.

Here she shows that she has mastered her instrument. Using her jazz vocal training to move up and down scales like Charlie “Bird” Parker and  like the best jazz vocalists she “Git it in yer Soul” like Charles Mingus, here she shows us the Birth of the Cool.

I’ve always loved Craig Finn’s song writing. He does that I really love where he takes religious symbols and texts and applies them in a modern context. And in this song I was wondering why he references St. Peter and what that means to him.

Luckily, he is actually sitting right here. So Craig Finn, what does the reference to St. Peter mean in this song?

Craig Finn: “St. Peter himself, Simon Peter, when they got him, when they were gonna kill him, they were going to crucify him, he asked to be crucified upside down. In deference to saying ‘I don’t deserve to die the same exact way Christ did. So, I found that powerful and then I started to think that ‘St. Peter upside down’ kinda sounds like a code for something. Like in the Sopranos. Like getting hung upside down could be something that is not literally hanging upside down. You know, it’s like when your house is ‘under water.’ Or something like that.

“So I was thinking about that, about someone who maybe just got in over their head. And I talk about this bar Mustang Sally’s which is on 7th Avenue in New York City. And in the song he is in there on a Monday morning, which, I have no idea what that place looks like on a Monday morning, but it’s not pretty, I can tell you that.”