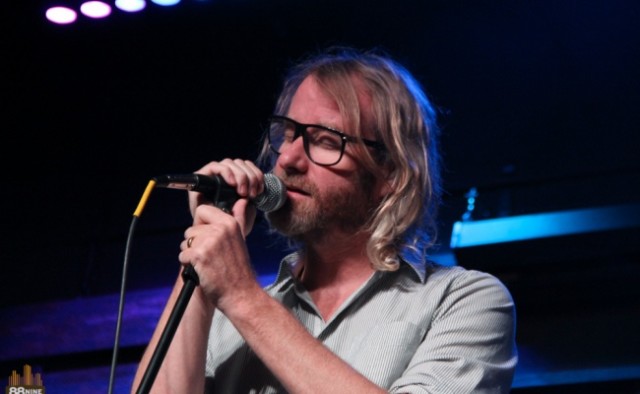 Here all 5 Songs We Can’t Stop Listening To:

Justin Barney: Matt, what’s one song that you can’t stop listening to?

Matt Berninger: “Famous Blue Raincoat” by Leonard Cohen. Every time I hear that, it’s one of those songs that’s like a novel, it’s like “The Great Gatsby,” one of those things that you want to read again and again. You can’t quite figure out exactly all of the relationships are and how it all plays out but it’s like a 3 minute novel.

Justin Barney: What do you like about Leonard Cohen song writing?

Matt Berninger: I love the mixture of mellow drama and silliness, I mean Leonard Cohen has a song, “Don’t Go Home With Your Hard On”, and it’s not “h-e-a-r-t”, and it’s funny and emotional crushing too.

Justin Barney: I have artist that I call the Holy Four artist of mine.

Matt Berninger: Who are your four?

Justin Barney: Tom Waits, is at the top and on the right and left you got Nick Cave, Leonard Cohen and on the under belly is Scott walker.

This song is Animal Collevctive at it’s best. I’ve had a couple of friends tell me that they just don’t do Animal Collective, because they  or they don’t buy it. And I understand that.

Animal Collective is a bit noisy and jumbled. There is a lot going on. But, I think that Animal Collective does a great job of sounding like something unapproachable, but at the same time being catchy and digestible.

When this song starts it’s gonna sound like two different songs are playing at the same time, but once you get to the chorus, even on the first listen you will be singing FloriDada FloriDada.

It’s that mix of experimentation with pop sensibility makes this song something you can listen to over and over and it’s always catchy, and you will never get bored or sick of it.

My dad does this big exhale when he is stressed out, or rather, just got finished being stressed out. It’s like *does exhale* When we were kids my brother and I used to always make fun of him for it, but now, when I’m at work and I just finish something that was really stressful I find myself doing this. The Big Exhale.

It’s relaxing. It takes everything that was pent up inside me and pushes it out in one long breath.

A lot of times a song can do that for me too, and just listening to it is one big exhale. So just take a minute right here. Take a breath. And let it all out during this song.

I CANNOT FIND THIS SONG ON THE INTERNET, to listen, start at the 11:40 mark here

I saw Lizzo perform this song at Eaux Claires Music Festival and shivers ran right down my spine.  This is what Lizzo had to say about her skin in a video interview done by StylelikeU.

Interviewer: “What do you love most about your body?

Lizzo: “I was just asked this question in a therapy session and I did not have an answer. I kept naming things about my personality. I was like ‘I really like my tenacity.’ And she was like ‘Okay, but what about some physical things?’ I think, most recently, I fell off a cliff and I scratched myself up pretty badly. I had a friend what was looking at my arms and like ‘Oh my god! Look at you! Look what you did to yourself! Look at your skin!”

After getting scraped up like that it made me appreciate my skin. So I love my skin.

On every rock album, I am a total sucker for the ballad. I’ve been listening to this PWR BTTM album constantly and it’s a rock album, but then you get to this song. The ballad, am I’m totally destroyed.

It’s about that awful time in a relationship where when it’s over. The break up has happened. And then, for some reason, you have to pretend that you don’t know them. Like, just because you aren’t together romantically you have to pretend like you don’t care about them even though you really do, and you can’t say, “Are you okay?” even though you want to. And if you see them somewhere, you just have to give that sad smile and day, “See you around.”

Listen “5 Songs We Can’t Stop Listening To” each weekday at 9am and 7pm on 88Nine Radio Milwaukee.