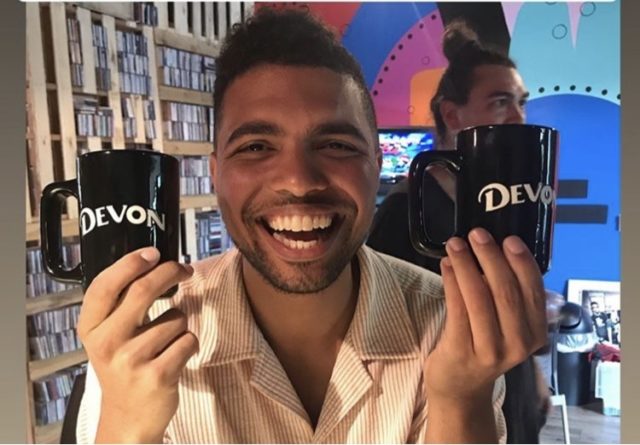 Our guest today is Devon Gilfillian. Devon Gilfillian is from Philadelphia, he just released the album “Black Hole Rainbow” last year and we’ve got the song “Unchained” in heavy rotation. He also did a session with us last year and he was just like, the nicest human being in the entire world. Tonight (Feb 6) he is going to be playing at the Pabst Theater. He’s opening for Grace Potter.

Devon, what is the last song that you couldn’t stop listening to?

Dude, funny enough, I’ve been listening to this song called “Better Than I Used To” by Illiterate Light. Have you heard of it?

Dude that song is a bop! It’s like ear candy. I can’t get it out of my head. And it’s funny because we played Newport and we also played a festival in Knoxville with Illiterate Light. And like they rock, they slayed it. They slayed both times, live. I was like, who is this band? And then I heard this song on the radio and I was like, man, this song is so good, who is this? And it was them.

What are they like in real life, what’s their vibe?

I met Jeff briefly, he’s the guitar player, he’s super sweet and super nice. Also I got to get lunch with Jake the drummer and he’s also a sweetheart as well. Such a sweet, sweet dude. He just moved to Nashville. And he hit me up and he was like ‘Hey man I’m moving to Nashville and don’t know anybody, just wondering if you want to get lunch?’ And I was like man yes. Yes of course!

And it’s weird, I swear I’m not biased because I heard the song on the radio and didn’t know who it was and was just like listening and I was just like ‘wow this is amazing.’ And then I actually Shazamed it and then I found out it was them and was like ‘oh man, wow.’

That is a testament to the band and to the song as well.

Good peeps, good music. It’s beautiful when that happens, when those two things come together.