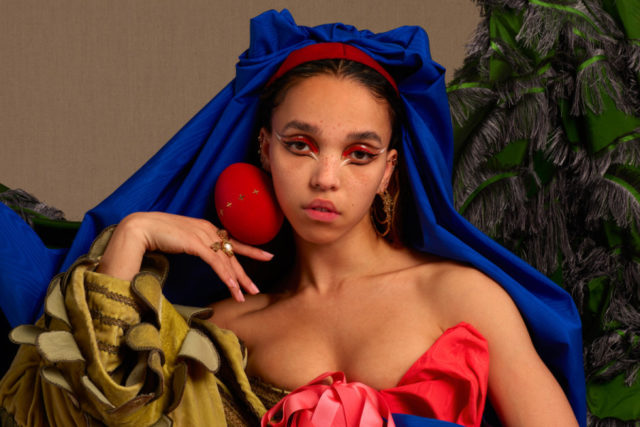 FKA Twigs released the album “MAGDALENE” in November. It’s an album that is steeped with ancient stories like the one of Mary Magdalene, Jesus Christ’s partner, and ancient sounds like the Gregorian-inspired song “thousand eyes” that starts the album. We wanted to uncover a bit of those ancient mysteries of this modern Gothic and get some insight into the thought that was put into this beautiful album. This is our conversation with FKA Twigs.

I love that you picked up on the concept of Mary Magdalene. For maybe those that aren’t as familiar with that story, can you kind of tell or give a brief about Mary Magdalene and who she was and her impact?

Well, I think for me I was always very fascinated with Mary Magdalene from when I was younger because her story seemed quite dark and scary. I remember hearing about her when I was at Sunday school and my Sunday school teacher telling me that she was a prostitute and she has to have demons expelled from her and there wasn’t that much more information. I just found that very interesting considering, you know, everyone asks you to have a back story and a lot of the focus in the Bible, with the male characters seem a lot more fleshed out in three days. But then there was this one woman that, it just seemed a bit thrown together. And she just wasn’t a very 360 character, essentially, in a 360 way in the Bible, at least from what I learned when I was a child.

So I was always quite interested in her. And as I got older, I learned so many amazing things about her like the fact that she was an herbalist. She had these oils, she was a healer, and she founded a lot of Jesus’s missions and in many ways was behind the operation. I just found it so interesting that I never was taught that as a child, and the sort of amazing kind of mysteries that surround her. There’s like rumors that she has, that all of her collection of oils apparently is still in Paris. I don’t know, there’s lots of different pieces of information that are kind of hard to put together. But one thing that is for sure is that she wasn’t just a prostitute that had to have lots of demons expelled from her.

I was also just very interested in, for me, she represents a certain archetype that in today’s society, doesn’t exist anymore. That’s the archetype of the virgin whore. That a woman can be innocent and pure and fresh and desirable and all the things that we associate with virginity, but she can also be dark and mysterious and all knowing and healing and productive and dangerous. I just realized that I can do both of those things at the same time. I realized that through the revelation of discovering Mary Magdalene and what she was about and the things that she did, and just kind of looking deeper into her history and just how her narrative had been changed so much. How many women’s’ narratives were changed by the patriarchy to kind of suit a bigger picture or story that they want, or agenda. And Mary Magdalene, I guess fell victim to that.

But you know, the truth always comes out in the end. I think that’s why, it’s only in the last 50 years, I believe that Mary Magdalene has been named a saint, and the film was made about her.

I’ve made this album about, well not about her, but about in some ways the energy that she gave me.

I was inspired in my writing by her, and I was inspired to get to know myself better as a woman through her story. To kind of focus on myself rather than on what my narrative may become. How she clearly did. So I don’t know, to me, it’s hard to kind of know that we’re looking at such an inaccurate theory of history. But I just feel, I know that there’s more to her story.

She’s kind of one of the first women who, her narrative just got co-opted. I’d like to know what was the moment where you were reading something of hers and decided that you needed to make this about it, or that you needed to title the album that, or needed to tell that story.

Well originally before I really started making any songs on the album, I was researching Lilith who was Adam’s first wife and I decided before I really made any songs I wanted to call this album “Lilith.” So I started researching into her story, which is also very fascinating and I was kind of going down that path. Of course, you know, when you work from the outside in as an artist, it doesn’t always serve you. So Lilith came from the outside in, and the journey kind of stopped when Magdalene came from the inside out in terms of, I just kind of accidentally kept on coming across images of her. And it just so happened that a friend of mine who’s a mystic was also doing a lot of work around Mary Magdalene as well. We got together in L.A. and we started to talk about oils and fragrances and herbs that are associated with Mary Magdalene and like rose and spikenard and certain things like that. Like when Jesus died, Mary Magdalene put spikenard on his feet. And, I think her narrative just took over actually. And it was just quite natural.

So with songs like “Thousand Eyes,” you’re talking about like her, her oils are still at this place in France and, you know, with the first song it has this kind of like Gregorian, medieval sound to it as well. And where did you find that or what do you see in that music that made you want to bring it to a new album?

It just sort of happened, you know, it wasn’t a contrived thing. I think I was listening to a lot of Gregorian music at the time and sort of studying some of the chord patterns and harmonies and it happens very naturally. I just found that those melodies started to seep out of me. And I never really go into the studio with a specific kind of goal of what to do, it just kind of happen.

Finally I do this segment called Songs We Can’t Stop Listening To. So I was wondering, what is the last song that you couldn’t stop listening to?

I really like Nico, “Chelsea Girls” at the moment.

I just like Nico in general because it’s very raw. I just like the rawness and I like just the way that her voice sounds. I like the way that she just unapologetically uses her instrument and it sounds really beautiful.