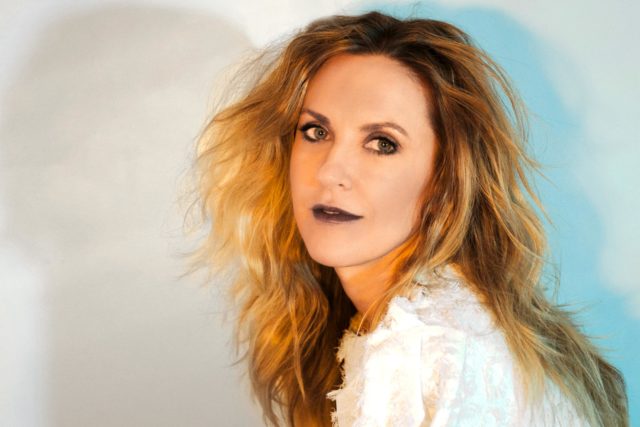 On this segment, I’m talking with Liz Phair. Listen to the whole segment below.

Justin Barney: I wanted to talk about “Good Side” for a bit since we’re playing it so much. There is this part in “Good Side,” in the background, where you can hear a voice saying some things off in the distance.

Liz Phair: [Laughing] You have blown my scoop. I’ve been thinking the last couple of days that I wanted to do a giveaway for guessing what I’m actually saying in that part. I want you to keep trying to figure out what I’m saying, but I’m not going to tell you until I figure out my holiday giveaway if you can guess.

That’s fair, but good that we are on the same track.

Yeah, totally. I wouldn’t say it’s a huge payoff, but there’s definitely like an “Oh.”

And its got horns at the same time. The song has a whole lot of dynamic in there with the voice in the background and the horns coming through so beautifully. What went into the composition?

In the last 10 years I’ve done a lot of composing for television, and I think sound design has now just become a feature of my music. I know Brad likes to take a lot of — one of the things we enjoy doing together — is taking fragments, or taking pieces or parts of an instrument track and isolating sections and building off of that to make it into a sort of beautiful mess, if you will. We both enjoy doing that, and I think you can hear a lot of that in “Good Side.” It’s a great song, but it’s also decorated with a little bit of experimentation.

So, you released the song and the book. Before we get into the book, is the song part of a larger project? Or is it in tandem with the book?

It’s kind of both. I think I designed both the book and the music to work in concert with each other. They’re not directly related, per se, but I will be talking a little bit more about how they’re related later. So, they’re related, I’ll put it that way, but it’s not as exciting as what I am saying in that mumbled part giveaway.

You’ve released the book “Horror Stories: A Memoir.” Why did you want to write the book in the first place?

Well, part of what inspired me to write my memoir at this point was what was going on politically in the country around the 2016 election. And the kind of questions we were all asking ourselves about character, and honesty and judgment, in the sense of “Oh, they’re wrong, I’m right.” Immediately as an artist, I then grapple with “Am I right?” and “Who would judge me and how would they judge me?”

I also think the loss of iconic music artists like David Bowie and Prince had another even more deepening effect on me. The conversation suddenly became, “What would you want to leave behind?” No one really knows how long they’re going to be around and “Are you making work that would speak for everything you want to leave behind?” I changed my mind about how I’m going to do my art from now on. I’m going to use that as a guideline. I want to make stuff that speaks to everything that I think, or care about, or believe in.

What I wanted to grapple with in the book was how do we become the people that we are? What are the actual decisions and events that have transformed our sense of ourselves or the life around us? And sometimes, those are really big impactful moments that anyone could point to and say, “Well, of course that would have a profound effect on you.” But some of the time, they’re private and personal and maybe not glamorous or exciting at all, but they shape you. My career and life has been shaped by forces that I think would surprise a lot of people. You all recognize the person that I became, but you don’t necessarily know how I got there.

Could you give us an example of one of those smaller moments that changed things for you?

Well, I certainly do think that the chapter hashtag which does address the “Me Too” movement in terms of “How does the industry treat women?” That persona that everyone is familiar with, the sort of loose, fair, brash, in your face sexuality was actually the result of many small interactions that I had growing up where I didn’t feel like I had a voice, or I didn’t feel like I was being seen as a person. I was being seen as a sex object. I think I put a more brash persona on myself to not be afraid, and to push back a little. I think that became part of what my music is known for.

It’s a difficult thing to say “This is the way the world is telling me to be and I am going to fly in the face of that.” That takes a lot of courage. How did you find that or know that it was going to be received?

It was hard to find the courage to write about those kinds of experiences. I was emotionally unwilling to unearth some of the things that have happened to me in the past. The reason why I think it’s meaningful right now for women to share their stories about this is because there’s a sense that we’re expected to absorb all this. It’s really not being generated by us, it’s coming toward us. If women know that other women experienced this, and that you can make it through and still make your art, that’s both inspiring and alerting. It lets people know this is not okay, don’t put yourself in a position to be vulnerable.

These stories are an ultimate vulnerability, you know?

They are. They’re emotionally vulnerable. I think the beauty of America is that I’m not in physical danger for writing a book. That’s really awesome.

Right. Were you at all concerned that these things are out there and the impact that they have?

I would say even now, even after the book is out, every other day I have a moment where I sort of shutter in horror that all these people are reading these intimate moments of my life. But at the same time, I’ve learned over a 25-year career that the things that mean the most to people, and that have been most helpful about my music and people’s lives, are the times when I’ve been the most honest. And I’ve revealed things about myself that are embarrassing to share. But that’s a lot of people’s experience. We’re all privately grappling with stuff. I think it helps when we can be honest about it, and then everyone feels a little bit less alone.

I absolutely agree. And also, as a man, it’s so important for me to hear you talk about these things in a way that’s super honest, and to hear that. That is a gift to me, so I just want to thank you.

Thank you. Just the thought process to understand — rather than the perfect sound bites — to let you see the behind the scenes. Nobody really has all the answers. All we do is struggle to find the best position we can put ourselves in to keep moving forward and feel healthy and happy and excited about our lives, which we all have to do with whatever struggles that we’re overcoming.

I was wondering, Liz, if we could get a song from you. What is one song that you can’t stop listening to or have been listening to a lot recently?

Well, currently the song that I’m obsessed with is by an artist called Lydia. I don’t know anything about them. It’s off of their album called “Liquor,” and the song is called “Gypsy.” It’s on repeat here in Phair world.

I think a lot of times when you listen to something, it’s not super important to know a lot about the artist. If you do, that’s great, but how does this song make you feel?

Exhilarated and ever so slightly competitive, in the best way. And just grateful.

Music. It’s an emotional best friend to carry with you everywhere.