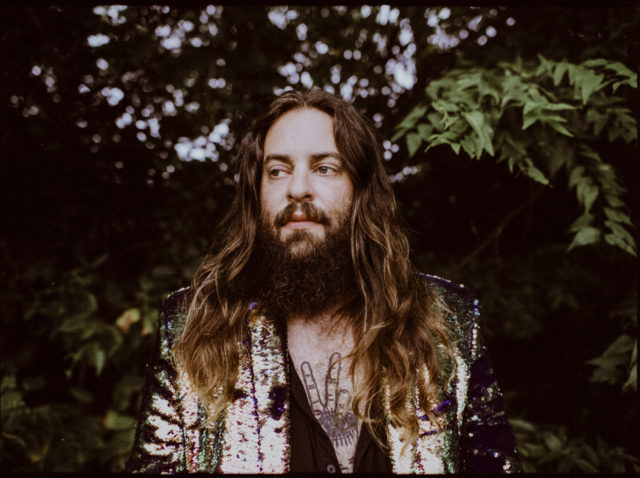 This is a special interview with Strand of Oaks. Tim Showalter is the mind behind the band. He’s been through town many times before, he’s even playing at The Back Room At Colectivo on Sept. 20, and we’ve done many interviews before. He’s one the artists I would consider a friend. So, instead of talking about one song, we just kind of let loose. This is our conversation with Tim Showalter, AKA Strand of Oaks.

So, one of the things I’ve noticed at Strand of Oaks shows is that you are really jamming on the material. I feel as though there is a very select group of artisits who understand the jam and are streching things out. Why are you doing that as a musician?

Well, I’ve always loved long songs. Obviously The Dead, Phish, Widespread Panic, all those bands have always been important to me. Also Sigur Ròs, Mogwai, Godspeed You! Black Emperor. I’m 37 and when I was 18 or 19, my favorite bands were the post-rock bands that would play super long songs. So, I had a taste and understanding of the dead and the jam world. “Sleep Dope Smoker” is one of my favorite records. So, all of these things combined into a kind of recipe, for me, turns into these songs. I already have some songs that are nine minutes long and that’s just so that I can fit them on vinyl.

But when it come to playing live, what I’ve learned as a band in the jam community, is that we use these things called “Platform Songs,” kind of like “Dark Star” was for Grateful Dead. I have a few songs in my repertoire that are just begging to kind of get lost in. The important thing that I’ve found with this band is that there is a balance of choosing when and when not to do it. Because I also have some pretty quick rock songs and I love playing those distinctly and just being like, “Here’s the song.”

It’s really inspiring to see groups, like a friend of mine, Hiss Golden Messenger, who understand that each show is unique and special. A lot of these bands, I feel like we’re all younger siblings to the band that is slightly older than us. And what’s cool is how supportive they’ve all been.

I just found out that Phish was playing “Eraserland” during their set break. And at Alpine Valley this year, they played “Eraserland” in its entirety before the concert started. I was just getting this flurry of texts from everybody saying, “They were playing ‘Eraserland!'”

Yeah, I think it’s a very generous community that’s not a, “Get what’s there for me” type of theme. It’s more of, “Let’s share this together and have this understanding that we all benefit from one another.” A gateway for me was getting to work with My Morning Jacket on this last record. They’ve straddled that beautiful line of playing rock and roll songs, but sometimes, “Steam Engine” will be 27 minutes long like it was at Red Rocks this summer.

They’re all heroes of mine and getting to play with them really taught me a lot. Being a veteran performer, it helps keep my mind active and interested knowing that we’re never going to play “Forever Chords” the same way, or “JM” will never sound the same. It just adds this level of excitement going into every show, and I think I can share that with the fans coming out. You’re not going to get what’s on the CD, you’ve got the CD at home, so I assume you’re coming out to the concert to kind of go some place with us. It makes touring really fun.

That is awesome. And there is a part of it that brings the community into it. There is music, when we listen to it, like you were saying on the album, it’s a personal thing. I’m listening to “Eraserland”on my headphones, and I’m by myself. And then, when you’re hearing the jam, it’s like we’ve all decided to come to this thing together.

It is, and, that’s such a good point you made. I’m stumbling for words because you’ve floored me with that. But, listening to records is a personal thing. It’s an intimate and isolated thing, and that’s why I think it’s so cool to write somewhat introspective and existential music from a pretty solitary place. Maybe that’s why I have so much joy when I’m on stage because it’s like “Hey, I’m not by myself right now.”

This is what I long for in my life. And I’ve had a really good time on this tour particularly because we’re doing a lot of new cities and places I haven’t been to in a while. I have had a great time going out and hanging out with everybody after the show. I actually recently stopped drinking and that was a fear of mine at first, to go out without a beer in my hand on this first “Eraserland” tour. And now, it just feels amazing. I’ll just take a water and go out with everybody, and remember conversations, and be present with everyone. It adds to the whole experience of the show even more.

I saw this question leading up to the interview and I might be stretching the question a bit. I consider it one song, but it’s an 80-minute song called “Fear Inoculum” off the new Tool record.

Eighty minutes! Okay, tell me what you love about the 80 minutes.

Well, although it is split into different sections, I was joking with my wife, “Something feels kind of settled in the universe that Tool has my favorite album out again.”

I listened to it once, and then for some reason my streaming had it on repeat, so it started again and I wasn’t sure when the album ended. I listened to it three times in a row the first time I heard it because we were in the van and I really haven’t stopped. I’m just trying to unravel this massive record in my brain. It’s perfect for being on the road because I got a lot of time to sit, and I can just devour this album. I believe that it is just one song, it’s just one, incredible, 80-minute song.

That is truly embracing the jam that we were talking about before. Tool can be a difficult band for people to approach, or to get into. If somebody were to approach this album for the first time, how would you let them into it?

I mean, the first song is just genius. The first thing you hear. They’re segmented into 13 minutes, and there’s little interludes that are three minutes, but they don’t feel that long. And that’s my favorite kind of long song. Going back to Alpine Valley, Phish did this 38 minute jam of a newer Trey Anastasio song called “Ruby Waves,” and it feels like its four minutes long when I hear it. I’m like, “How is this 38 minutes long? I just started listening to it” And I think that’s what the Tool record does for me, it takes me somewhere else. Also, it’s kind of nerdy musical stuff, but the whole record is in an odd time signature. It’s based around sevens, instead of even numbers, so it has this very exotic flow to it in that meter. For me, it just becomes even more hypnotizing in that way. And knowing how deliberate that time signature probably was to Danny Carey, there’s probably some giant philosophy written behind it. They just think about things a lot more than I did.

[Laughs] I mean, it’s a deep cut, I obviously have a lot of music, but all other records sort of stopped existing when this new Tool record came out.