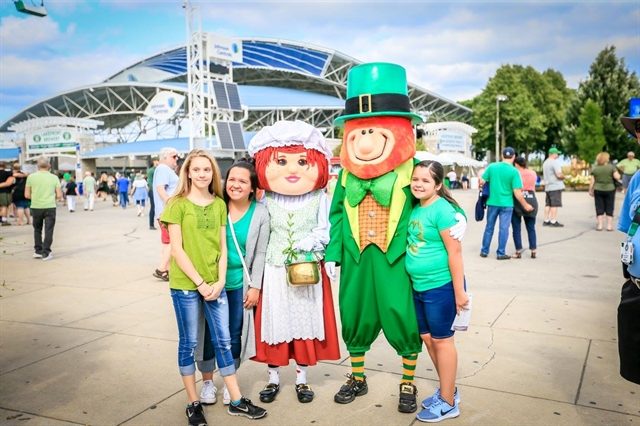 Milwaukee Irish Fest, the world’s largest celebration of Celtic music and culture, is holding it down as the city’s main ethnic festival this weekend. For many, Irish Fest holds a very special place in the pantheon of Milwaukee’s festivals and I tend to agree. Irish Fest seems to have a musical lineup that just has something a little special about it. This year they’ve got several intriguing acts; Hermitage Green, an indie folk rock outfit out of Limerick has a sound similar to Arctic Monkeys, and they’ll be a major draw. Elephant Sessions, from Scotland, work neo-traditional sounds and are a good bet. Afrocelt Soundsystem, the High Kings and Gaelic Storm are some other  higher profile bands performing throughout the Festival and I’ve heard singer-songwriter Susan O’Niell, who’s got a lil Amy Winehouse to her, is also worth catching. If the music on the grounds isn’t enough, maybe you’ll catch wind of one of the many impromptu sessions that happen throughout the city after the festival ends.

Talk about an interesting double bill. Ben Harper and Trombone Shorty are currently on a co-headlining tour this summer and it makes its Milwaukee stop this Friday with a show at the Riverside Theater. It’s funny how not-strange this show seems. The two artists are different enough and yet similar enough to just sort of “fit.” Not sure who starts the show, but I’d have to think that at some point they play together and blow your mind in the process. Even if they don’t, this is definitely in the two shows for the price of one spectrum.

Celso Piña is an accordion player and singer who has risen to be one of the freshest figures in cumbia music. Cumbia has its origins in Colombia’s African and indigenous populations, but it has spread to be one of the most universal Latin American genres. Celso Piña is a pioneer in mixing or blending sounds of tropical base, combined with all kind of popular genres from norteño to sonidero, ska, reggae, rap, hip-hop or R&B, just to mention some. For this reason he’s considered one of the best musicians from Mexico and Latin America. I saw him last winter in Chicago and he was pretty amazing, so I’m gonna personally vouch for this rare Milwaukee appearance. Heck, you’ll probably see me there when you go.

This Sunday’s Shakey Graves, Dr Dog and Caroline Rose show at the Riverside Theater is the weekend’s best bet. A triple play of artists we love to plat at 88Nine and in fact, Shakey Graves’ll be in for a session before the show on Sunday. All three acts are worth seeing and not only because of their quality. Shakey Graves is working from a whole new vibe as they’ve taken their sound in a different direction on their new album, Can’t Wake Up. Dr. Dog sort of molted as well, outgrown the baby fat, with stronger work of late. Caroline Rose is the up-and-comer on the bill, so get there early and stay late.