There has been a lot of talk about movie soundtracks here at 88NINE this week.  From the new TRON: Legacy soundtrack that Daft Punk has composed, and an article by Tarik on director David Lynch's new musical endevors.  We've also teamed up with The Times Cinema and Rosebud Theatre for a new morning segment called SECRET SOUNDTRACK.

With all these movies soundtracks clutering up the studios, I thought I'd pull from my favorite soundtracks for todays SEVEN O'CLOCK SAMPLE.

Whenever I'm asked what my favorite movie is, I'm quick to say PULP FICTION. 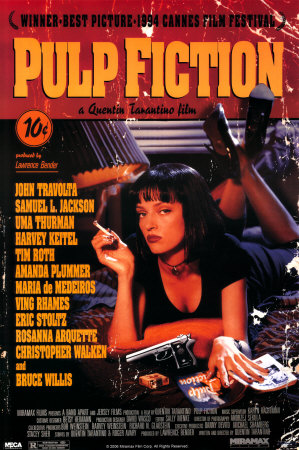 I, like many, am a big Tarantino fan.  His style works for me everytime.  The man also has one hell of an ear for music.  Resevoir Dogs, Kill Bill, Deathproof all have great soundtracks; but few can top the PULP FICTION soundtrack.  The soundtrack's sales did almost as well as the movie itself. The soundtrack reached No. 21 on the Billboard 200, and at the time, went platinum  in Canada alone. In 1995 the soundtrack reached No. 6 on the charts according to SoundScan.

One of my favorite songs from the movie is JUNGLE BOOGIE, by Kool and the Gang.

( you know I gotta play the Soul Train YouTube )