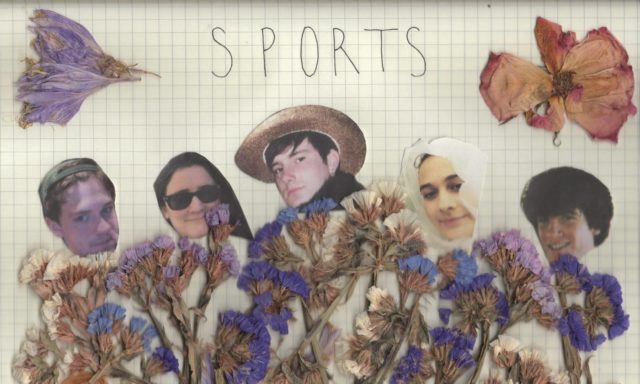 It’s easy to assume all bands release a new album with a promotion cycle of press photos, interviews, and heavy touring. But what about a band that doesn’t know its future?

“All of Something,” the second full-length album from Kenyon College alumni Sports, was released today. It was recorded to capture a moment on the precipice of uncertainty. All members would soon separate across the country and, knowing this, set to record their collection of songs “the right way.” Their previous self-released demo and album were recorded lo-fi at their college radio station.

The band met their choice engineer and producer Kyle Gilbride opening for his band Swearin’ as well as 88Nine favorite Waxahatchee, while at Kenyon College. Gilbride has engineered a growing scene of DIY female-fronted groups, including Waxahatchee, Girlpool, and All Dogs. Known as the guy who “probably engineered your favorite DIY rock record,” the “right way” is a pleasing mix just clean enough without losing Sports’ raw emotion.

The album mirrors the feeling of uncertainty and being on the edge of adulthood post-college, through the lyrics and yearning vocal stylings of singer Carmen Perry. At times even the guitar melodies will bend and fall apart, piling more doubt to the questioning words. The topics lean heavily on doubt and domestic metaphor. Perry told 88Nine in an an interview, the topic came from living in a house for the first time, “which made me feel like a grown-up, juxtaposed with feeling like a kid when I’m supposed to be an adult now.”

It’s easy to draw comparisons to the DIY scene of the 90’s, with familiar lo-fi instrumentation. Perry conjures Mazzy Star (or perhaps a more excitable Courtney Barnett) in the album’s more languid tracks like “Harder” and “Clean Socks.” When asked about ’90s musical influences, guitarist Jack Washburn remarks that while they have recieved the comparison often, “It’s not something that’s crossed our minds and seems arbitrary.” Perry adds, “I think it’s more that it’s cool to talk about your feelings again.”

Listen to “Harder” from full-length “All of Something” below:

The subject matter shapes small relatable moments, and if the listener is not experiencing these moments currently, it’s easy to empathize. Perry finds, “the more I write about specific things, the more relatable it seems to be. A lot of the songs are about more than one specific thing, but they are real feelings. I’ve never been interested in songs that are clearly fictional stories. You can see yourself in them, they take on new meaning.”

With the release of “All of Something,” no performances or tours are booked. Though a smaller version of the band recently performed a well-reviewed set at CMJ Festival this year. We’re not giving up hope yet, as the band isn’t calling it quits just yet. Perry told us they’re hoping to tour during Winter or Summer Break 2016. “We’re hoping to craft songs from afar. We’ll work on our solo stuff. The worst thing would be to hold on too long. I hope it works, but if it doesn’t, we’ll keep it positive and realistic. But we’re not ready to detach.”

88Nine is currently playing “Get Bummed Out” from the new release. Stream it below:

Purchase “All of Something” on vinyl or digital download HERE.