Tonight at 9PM thousands of Milwaukee residents will Storm the Bastille. The run pays homage to French citizen’s storm of the Bastille in 1789, an act that ended the monarchy in France and lead to the signing of The Declaration of Rights of Man and of Citizen. The Declaration is seen as the beginning of a modern democracy based on the premise of human rights. Milwaukee’s Storm officially kicks off Bastille Days, Milwaukee’s celebration of French culture. Of course, we are pretty focused on the musical aspect of that culture. In honor of Bastille Days, oui bring you a list of 10 French songs to listen to during Bastille Days.

Perhaps the most iconic images of french cluture come from the street posters of Toulouse-Lautrec. If you go to Bastille Days, which we hope you do, there are two images that you are bound to see by him, the first is Le Chat Noire and the other is of French cabaret singer Aristide Bruant, whose sartorial distinction caught the eye of Toulouse-Lautrec. Le Chat Noire was the name of a club where he sang, as well as one of his most famous songs. Recordings of Bruant from the late 1800's have not faired well over the years, but we couldn't pass on the opportunity to shed light on this influential chanteur. 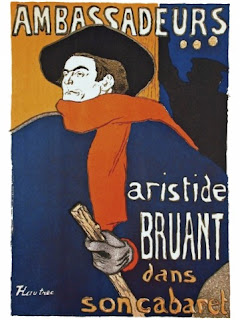 More famous for her acting in films like Inglorious Bastards, Laurent is also an incredibly talented songstress. Her 2011 album, En t'attendant features songs in both french and english, and features 88Nine favorites like Damien Rice. This song, Circus, features distinctly french-sounding-instrument: the accordian. It rises and falls like a trapeze act and will leave you in a beautiful daze.

7. Daft Punk- Around the World

In making this list, I almost completely forgot that Daft Punk was from France, I had just assumed they were from a planet far into the future. They have the hottest hit of the summer with Get Lucky but I just couldn't help bringing them around the world and to Milwaukee for Bastille Days.

Serge Gainsbourg is the most Frenchy French man that has ever existed. He is dirty, sex driven, and constantly with a cigarette in his mouth, and I love it. It didn't matter that Serge was a rather homely man, he captured the hearts of women everywhere with his charm, including one of the most beautiful woman to ever grace this planet, Briggite Bardot. Their 1968 song Bonnie and Clyde launched the two into being one of the coolest couples of all time. In Serges words, "Ugliness is in a way superior to beauty because it lasts."

5. Nouvelle Vague- In a Manner of Speaking

At #5, the only song that is sung in english makes it to the list. Like many of the songs on this list, it's outstanding quality is that it sounds cool. Behind a sultry felame voice is a minimal bossa nova beat. It's beauty. Nouvelle Vague also released an album of amazing covers, including a spectacular version of The Dead Kennedy's Too Drunk to F***.

Turn the speakers up, get ready to bounce around for 2:55 mumbling your best phoenetic french and waiting desperately for that OOoooEEEEeeOOOO. Plastic Bertrand's 1977 Ca Plane Pour Moi made it up to #47 on the US charts, and is just as good today as it was then. Crank it this weekend.

Admittedly, this is a pretty deep cut for #3, but it is worth it, and just as much fun as Plastic Bertrand. When the US invented Rock 'N' Roll music in the mid 1950's, france was quick on our heels to do their best imitation. the song  Ferme la Bouche holds up to rock 'n' roll standards just as well as any of our rug cutters here. It also features some of the best scat lyrics of all time with "a blah blah blah blee/ a blah blah blah."

Out of the classic French singers, Jacques Brel, is to France what Sinatra or Martin is to American standard singers. But Brel has a distict sound that is identifiably Frech, with piano and accordian acompanying him. His passion is as evident as his talent. If you don't believe me, just watch his performance of Amsterdam.

We have reached #1. The quintessential French song, and my absolute favorite. The song is Hymne a l'amour by Edith Piaf. France is eternally tied with love and romance, it is only fitting that number one is the Hymn of Love, an ode to those ideals. You can hear the earnestness in Piaf's voice swell with the rise of the orchestra. This is a song that will bring a tear to your eye.