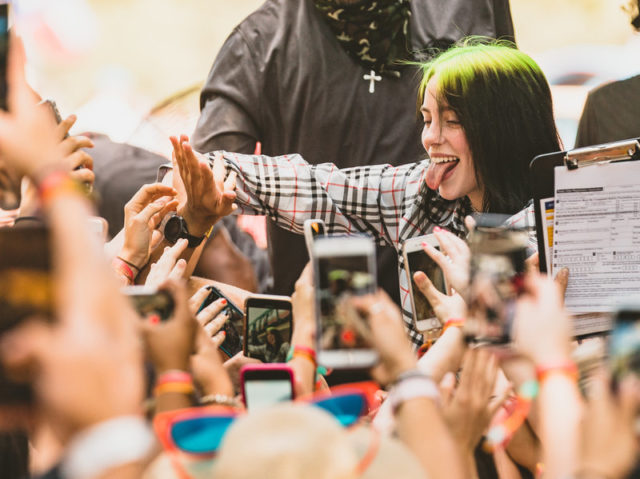 “The thing that’s worked,” Billie Eilish says, “is to just make what I wanted to make and expect nothing.”

Of course, making what she’s wanted to make has delivered far more than that: When Eilish took the stage at the ACL Music Festival in Austin on Oct. 5, she towered over a crowd that seemed impossibly vast. Untold tens of thousands of fans stretched beyond any given sightline as the 17-year-old whipped up a crowd already reeling from the 95-degree heat.

A few hours earlier, Eilish sat at a much smaller spot — the Bonus Tracks stage, which ACL added this year as a low-key place to record live interviews for podcasts such as this one — for a conversation about her life and career. The crowd, though scaled down and situated in a shady oasis next to a wine bar, was no less fervent. Some had watched her brother Finneas perform his own set across a field a few minutes earlier, but many more had hunkered down for hours to secure a prime spot.

Eilish’s career began in earnest when she released “ocean eyes,” a moody bit of synth-pop written by Finneas — whom she calls “the most talented songwriter I’ve ever met in my life” — via SoundCloud in 2016. The singer was 14 at the time. That song led to an EP (2017’s Don’t Smile at Me), followed by this year’s millions-selling debut album, When We All Fall Asleep, Where Do We Go?Combined, Eilish’s songs have been streamed roughly 17 billion times, while “bad guy” finally topped the Billboard Hot 100 in August after a record-setting nine-week run at No. 2.

Of course, that nine-week run coincided with the record-setting 17-week streak achieved by Lil Nas X’s eternal “Old Town Road.” For her part, Eilish insists she wasn’t following the charts.

In this interview for All Songs Considered, Eilish talks about getting through her teenaged years, directing her own videos, prepping for a world tour, experiencing art with synesthesia and much more.

Special thanks to KUTX or helping make this interview possible.