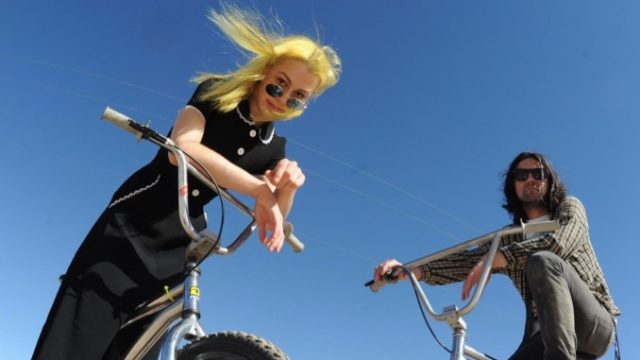 Their eponymous debut album hit stores and streaming back in January, and we’ve been playing it on 88Nine Radio Milwaukee since.

I spoke with both artists about their music and songwriting partnership, plus our conversation took an unexpected (but welcome) turn into the realm of pseudoscience. And Soccer Mommy. And The Doors.

Check out our interview below.

Justin Barney: I was thinking that if there was a musical venn diagram of both of you. What is the artist that is kind of in the middle of that venn diagram?

Phoebe Bridgers: I feel like, a lot of the large majority of our tastes, except for maybe The Doors or way outside, but I think Soccer Mommy falls directly in the middle for both of us.

Conor Oberst: Yeah, I feel like we have pretty similar taste in a lot of music.

Phoebe Bridgers: Like, our roots quote on quote are pretty much the exact same.

Justin Barney: I really like Soccer Mommy though, because that’s like a newer one that’s in the venn diagram.

Justin Barney: Can you each individually describe what you like about Soccer Mommy?

Conor Oberst: I mean, I just think that she writes amazing songs and her voice is like extremely recognizable and unique. Yeah, I mean they’re a great band too, but I guess I just think her songwriting is really top notch.

Phoebe Bridgers: I feel like, they’re really casually cool. Like, you don’t really notice, because you don’t need to. There’s so much else to focus on than just the words. I feel like, it takes me a second longer to like really absorb all the words. Basically they could just get away with being a cool sounding band, but they’re not. The words are so good and their choices on production are so interesting. Like, when the drums come in on that song, “Wildflowers” and yeah, there’s just so many cool words. And I feel like, Sophie’s voice is as far from musical theater as you could possibly be. She’s not italicising the subtext. She’s just kind of throwing away these very hard hitting lines.

Conor Oberst: Yeah, it is. The delivery is super casual, which makes it kind of cooler I guess.

Justin Barney: Could we focus in on one song? Phoebe, you had mentioned “Wildflowers.” Is that a favorite of yours?

Phoebe Bridgers: It is! I feel like, my favorite favorite is probably “Scorpio Rising.”

Conor Oberst: Yeah, we almost covered that song the other day.

Conor Oberst: We didn’t quite get it together. We were going to play it in Nashville where they live, but it was kind of a hectic couple days before that. So, we didn’t have time to learn it before sound check.

Phoebe Bridgers: Yeah, we didn’t have time to do it justice, but yeah the lyrics are crazy, the production is awesome, and it is definitely one of those song for me where it’s like the same three chords that I play all the time. And I convince myself everytime I sit down to write a song that there are no more songs to be written with them. So, it’s kind of an immediate classic and a “why didn’t I think of that” sort of song for me.

Phoebe Bridgers: Well, in a literal sense it’s about being in love with someone who gave you attention that is taking it away for someone else. But, I think on a deeper level it’s about the way the writer is. The way she in takes information and the way that she is, and why she is the way that she is. And about astrology a little bit.

Conor Oberst: I don’t know much about astrology, but apparently Scorpio is kind of a gnarly sign.

Conor Oberst: People end up being not necessarily evil, but…

Justin Barney: I think it’s so interesting, because that’s what I love about songwriting as well. You get a look into who somebody is and the way that they see things. And especially the way that they interpret love or the way that it comes to them. Or what they kind of value in a relationship.

Conor Oberst: I don’t really pay a lot of attention to it. You know,  I’ll read a horoscope on occasion if I’m flipping through USA Today or something.

Conor Oberst: But yeah I don’t pay that much attention. What’s my rising sign? How do you know that?

Conor Oberst: Oh, I have to look at that.

Phoebe Bridgers: We’ll be fine. I’ll be your chart, but yeah it’s fun for me. I like Co-Star a lot. The Co-Star updates are freaking me out lately though.

Conor Oberst: You know what Co-Star is?

Justin Barney:  I don’t know what that is. No, what is that?

Conor Oberst: It’s an app, where basically you connect with people about your astrology sign.

Phoebe Bridgers: Yeah and it’s like queer run astrology stuff. And I feel like I’ve gotten everybody that I’ve ever been on tour to add themselves to it. Yeah, it’s fun.

Justin Barney: Okay, so since you know about this. So, I have a twin brother and he is 12 minutes older than me. Are we different then?

Phoebe Bridgers: When were you born?

Phoebe Bridgers: Sagittarius, okay. I think you’re both Sagittarius, but you probably have different rising signs and the same moon sign.

Justin Barney: And how does that work? I feel like we’re really different people. How does that explain the differences that we have, if we’re so close?

Phoebe Bridgers: I think it’s a fun thing to half pay attention to and it’s such a weird system that it’s fascinating to me. But, no. For instance, my best friend is a Scorpio and then all of my least favorite people also are. So, yeah it doesn’t make sense. It’s fun to connect.

Justin Barney: Yeah, it is fun.

Phoebe Bridgers: Yeah, we connect to what we resonate with about it. I feel the same way about tarot cards. If were to say, “hey, today take some time for yourself.” You’d be like, “yeah, you’re right. I do need that.” Or like, “A stressful thing has happened to you that you really need to internalize and focus on way you’re reacting to it.” Every single person on Earth would be like, “yup.” And that’s all astrology does. It’s pretty universal.

Justin Barney: Yeah, totally. Do you look at your and Conor’s relationship and do you read something while you’re on tour and gather something out of that?

Phoebe Bridgers: Apparently we’re compatible, which someone told me the other day. We have a good working relationship for an Aquarius and Leo, which is weird. I think it’s because we were born six months apart in our perspective years. But no, I don’t. I never really thought about it.

Conor Oberst: We’ve got to get our charge.

Phoebe Bridgers: We’ve got to get are charge on.

Justin Barney: I mean, that would be a fun thing.

Phoebe Bridgers: Yeah, that would be a fun thing.

Justin Barney: So, when you were talking about…I mean, I have one minute here as we’re going on about astrological science. You said it’s about as far from musical theater. Are we pro-musical theater or are we anti-musical theater and singing voices?

Phoebe Bridgers: The only reason I say that is, because that’s something that I’m self-conscious of in my own voice. Singing lyrics with a lot of feeling. I get self-conscious of my sound being musical theater, but no I think there’s definitely a place for it. I love bands like Queen, and I think it’s a completely differently style. I think it’s an interesting —

Justin Barney: Why don’t you want to do it?

Justin Barney: Yeah, I like that too and in both of y’all’s music that makes a lot of sense. Well, this is it. This is my time. So, thank you for talking