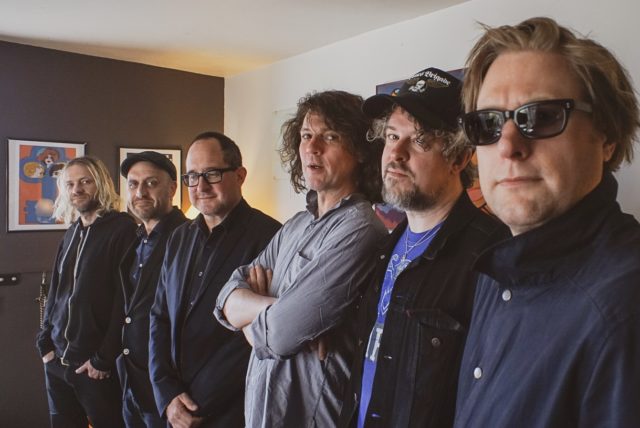 The Hold Steady are America’s bar band. Now, the bar has a little more dust on it. It’s been around for a while, but it’s still well attended by the regulars. It’s more The Newport than Hacienda Brewing Company. Let’s face it, The Hold Steady have always been a dive bar band.

“Thrashing Through The Passion” is the seventh studio album from bar flies The Hold Steady. They’ve brought back Franz Nicolay for the first time in a decade and it feels like a reunion. The horns are louder. The verses are bigger. Raise your mugs in the air The Hold Steady are back! Lead singer Craig Finn has always been the man at the front. He’s Jesus Christ the morning after he turned all that water into wine. In “Passion,” our hungover hero’s got parables with new characters and looming figures. You never know what’s going to happen in a Hold Steady album, so we went right to the source and called Finn from a booth in Seattle tell us what he can about this next book of their Bible.

How was seeing The Rolling Stones yesterday?

Stones were amazing. I couldn’t believe how good it was. It was obviously fun to see, but the showmanship is just incredible. I’ve been to arena shows recently, but it’s been a while since I’ve been in a full-on stadium show. There aren’t that many bands that can do stadium shows at this point. I was just marveling that we saw him play about 20 songs, but we could have rewritten the set list with 20 different songs — all huge hits. That really is insane. I’m really glad we got to go.

Do you have a favorite Stones era?

I’m very into ’em. My favorite Stones album, at least what I say it is, is “Goats Head Soup.” You know, there’s sort of four classic records that people point to: “Sticky Fingers,” “Exile on Main St.,” “Let it Bleed” and “The Beggar’s Banquet.” But right after that, when they get into “Goats Head Soup,” they start wearing makeup and capes. I liked that. I like the darkness. They’d been so famous and such big rock stars for so long, that they sort of left reality. I also really like going into the later ’70s and ’80s stuff, like “Emotional Rescue,” where it becomes very New York. They started incorporating stuff like disco and new wave in the sound.

I love that idea of accomplishing everything you were supposed to. Where the only thing left to do is get weird.

Yeah. I mean, they gotta keep going, and “Goats Head Soup” has some really strange stuff on it.

So, your new album, “Thrashing Thru the Passion” is out tomorrow.

Yeah, it’s pretty exciting. The second half has come out digitally over the past few years. We’ve been releasing music periodically over the past few years, just digitally, and really enjoyed that because there’s this sense of finishing a song. There’s no manufacturing time, marketing plan or whatever. It’s just like releasing music to the fans. But when we went up to Woodstock to record these five songs and put them together, they just sounded so much like the front side of an album. So we decided to make it an album. It’s interesting in 2019. Obviously people listen to music different ways — streaming is a big thing. But there are still people out there and in our fan base that don’t engage with anything unless it’s an album. So you’re trying to please a few different types of people. I always sort of thought these singles would become an album. Sort of like the first Clash record that was a collection of singles. The Stone Roses’ first album was a collection of a lot of music that had come out before. I always saw us doing things that way, and that’s sort of what this is.

Well, I think that a big part of The Hold Steady experience is the full album. There is a certain something about Hold Steady records that have a through line of reoccurring themes that start in the beginning and come back around. It is one of the joys of listening to your records.

Yeah. We obviously grew up with the album as the preferred format. So, I tend to think of things that way. We have a few albums in particular that are very much designed. “Separation Sunday” comes to mind — it’s “the concept album,” so to speak. But you know, I think that’s there in this one too. I think that there are things that you’ll notice are popping up in several different songs. It was just revealed to the world in a little different order.

What’s revealed? Tell me your secrets.

Well, when I say revealed, I mean that people aren’t hearing them all at once, so to speak. There are phrases, and for instance, on the front side alone there are several different mentions the military figure, The General. So you can listen for that, and see what you think.

I read every Hold Steady album through the seven layers of what it could be. To me, “Thrashing Thru the Passion” is a reference to the passion of the Christ. Of course, it could not be. Can we confirm or deny that?

I think you probably know, I like things that mean many different things. We’ve talked about the Christ passion, but at the same time, I think that there’s a sense of the passion we feel for the band and for making music. There’s also the lustful idea of passion. All of them can plug in to work in this case. We actually talked a lot about the title, and spelling “through” as “thru,” which is kind of the first time modernity has crept into The Hold Steady — at least in titles. I’ve gotten used to spelling it that way through texting. So, we thought of the passion, in the sense of the biblical passion, that’s very old juxtaposing with “thru” in this sort of modern-text spell was interesting in itself.

I love that. So the last time you were in Milwaukee, you were touring Craig Finn solo albums. You were on stage here talking about the difference between Craig Finn and Hold Steady. You had said that with Hold Steady albums, big, huge moments happen. Then I was listening to “T-Shirt Tux” and there’s the line, “Tiny triumphs and massive failures.” And I was like, that’s the whole thing.

That is sort of the whole thing. It feels tiny when you triumph, but massive when you fail. These are perceptions.

That is so true. Why is that?

I think it’s because we are our own worst enemies. It’s very hard to love yourself as much as you love others, or a small baby or something like that. You can’t treat yourself like that. It’s very hard. It would be wonderful if we could, but you know, somewhere in there lies our humanness.

So you had said before that on the Hold Steady records, your job is primarily in songwriting. How is that for this album?

Yeah, especially in the lyric writing. Usually Tad, Steve or Franz bring in the music, and it’s not always arranged. It might be a couple parts that go together, and I’ll write words to each part, and then we talk about how to construct it. So it starts out as an individual effort, or two individual efforts. Then as we start putting it together, it becomes more collaborative in the practice space and  studio.

I think the last time you were here, you were playing at Cactus Club and talking about how the relationships we all have are imperfect and how they change. How has your relationship with The Hold Steady changed?

Well, we’ve all gotten older and mellowed in some way. Four of us have children — I’m one of the people who don’t. I think that changes people, usually for the better. Also, in the last five years I’ve become a better musician and I think that’s from playing with different people. That elevates you. So hopefully I’m able to bring something new to this record that I wasn’t able to in 2014.