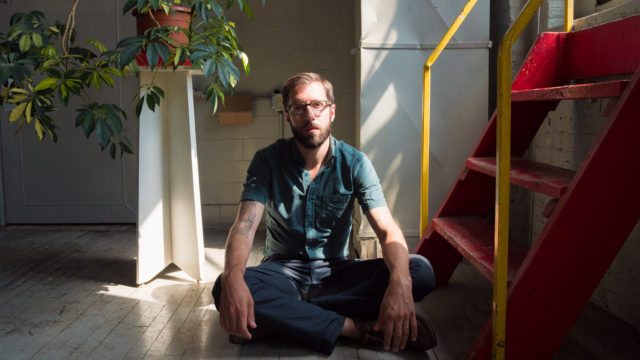 On more than one occasion I have been told by prominent Milwaukee musicians that Devin Drobka is the best drummer in the city. The 32-year-old west side native scoffs at the notion, but shows deep gratitude for those who express it. Upon seeing Drobka in action there is reason to believe it. His fluidity and virtuosity is hard to match.

Radio Milwaukee listeners may recognize Drobka as the drummer from beloved local band Field Report, which he joined in the summer of 2017. Through his involvement with Field Report, Drobka participated as an artist-in-residence at the Eaux Claires festival this summer. The experience was a career highlight for Drobka, combining his love of improvised music with world-renowned collaborators such as Mouse on Mars.

Before providing the back beat for one of Milwaukee’s most popular bands, Drobka was a respected member of the local jazz scene who helped found the “Unrehearsed” series. He is a product of early 1990s Milwaukee Public Schools music programs. While in high school Drobka did some touring around the United States with metal and punk bands. He was trained at the Berklee College of Music, has lived in New York City and has toured all over the world as a sideman with various jazz acts.

Following the release of Drobka’s debut record, I sat down with the drummer at the West End Conservatory where he teaches private lessons. We discuss the importance of mentors, the difference between keeping time and listening together, improvising with intent, the avant garde and the idea of expression. Utilizing a drum kit, Drobka also explores the evolution of percussion styles. 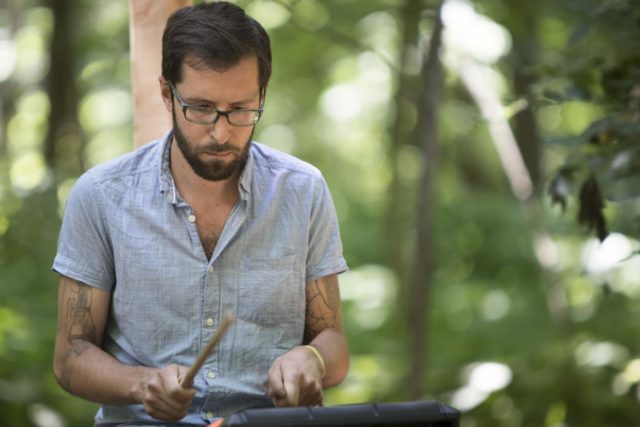 Devin Drobka on the importance of mentors

JG: I read that one of your teachers was Bob Moses. Was that in Boston?

Drobka: Yeah, the great Bob Moses. I saw him perform at this violin shop that used to have great concerts called Rutman’s Violins. They would close and then put all these chairs up and Bob was playing with a trio. I wasn’t really ready for what I saw. At the time he would have been about 58, but I just never heard a groove like that. I never heard intent like that. I went up to him afterwards and said, “Could I take a lesson with you?” And he said, “Yeah man. Just send me an email.”

We struck up a friendship and I was lucky to be on his good side. He’s a very exacting character, so if you got on his bad side, you were on his bad side for a little bit. I studied with him for about a year-and-a-half. While I lived in Boston I would help him out, bring his drums to shows, help him break down and just be around him as much as I could.

JG: That’s a testament to taking the initiative to go after a mentor.

Drobka: I’ve come to accept that there’s a lot that I don’t know. Some might hide behind that as a weakness, but I see it as a big strength to admit, “Wow, I really don’t know.” And even if you feel like you’ve worked on something for a long time, if I see somebody that’s doing something interesting I will ask, “What is that? Can you tell me?”

I don’t have much fear about just going and asking somebody if I’m really curious. If they resonate with you then obviously something is hitting inside you that you want to know about, so just go ask.

On the Berklee College of Music

JG: I’m curious about Berklee. What makes it such a special school?

Drobka: The thing that impressed me most was the student body. You’re surrounded by all of these incredibly creative and driven people from all over the world. And you kind of realize, “Oh my gosh, there are more of me out there.” There’s comfort in that. So much of the arts can be isolationist, so to know that for a few years we are all concentrated, really trying to push each other and really trying to grow.

I think what made that school special was that I was around some really special people who are still some very close friends of mine. They kind of set the standard for me, so sometimes anything below that, I don’t really care about. Because I know what the other side can be like. I appreciate Berklee for fostering that environment and for helping to push these young creative individuals and giving them the resources to have whatever type of career they would like in the music industry.

I want to play with people that really listen. Because that feeling is intoxicating when you’re playing and they take your whole being in. That’s a form of love that’s pretty crazy.

On moving to New York City and listening together

Drobka: This is literally the story—I looked at my record collection and every record I owned came from New York City. In one way or another all of my favorite music was being made there. So I was just like, “Well, I guess I’ll go. I want to know.” My teacher [at Berklee] said, “Go for two years and if you like it, then stay for another two and always kind of check back in.” I saved some money and went. I ran out of money in four months and started working jobs, and I was touring a bunch when I was out there.

New York was different because now it’s like, “Oh, I’m living out here in this music community. It’s not school anymore. How do I make this work? How do I eat? How do I pay rent? What am I doing out here?” It really made me think about what I wanted to say. I wish I stayed out there longer to figure out more of that. I was figuring out some things more because of the types of players that were out there.

It was nice to finally play music where it felt like everything you did was being taken into account. You weren’t just serving a utility, though you could find those gigs too. I remember having experiences where every note I played somebody was catching it and they were very much like, “Okay, you’re doing that, I’m in it.” Not like, “Just keep time for me.” That was maybe a given, but then I would do something and somebody would take it into account and create an entire solo from it.

That was my experience in New York, just kind of figuring things out and realizing that I want to play with people that really listen. Because that feeling is intoxicating when you’re playing and they take your whole being in. That’s a form of love that’s pretty crazy.

How are any of us supposed to know how anyone else is feeling, other than if you go up and ask them?

On moving back to Milwaukee and improvising with intent

Drobka: “Unrehearsed” was a direct take on “Out of Your Head,” which was an improvised music series that brought all of these Brooklyn musicians together to just play and create. I thought, “How come we’re living in a city with a major symphony and there’s a jazz scene and a rock scene and nobody is dipping in?” I mean, maybe I’m wrong for that. But that was my observation moving back to Milwaukee. That seemed silly. Why don’t we try something?

Or, just because I play jazz doesn’t mean I can’t be curious about Ravel or Debussy. Same with rock musicians. Maybe there’s a guy that’s really great with effects pedals. Get curious. That was the only thing. I was surprised by the lack of curiosity. But sometimes that’s what it takes, you got to make something and say, “Hey man, I respect what you’re doing too.” Because how are any of us supposed to know how anyone else is feeling, other than if you go up and ask them?

I used to just go to open mics and tell people, “Hey, I would like to play with you.” And they’re like, “Oh, don’t you play jazz?” And I’m like, “Yeah, so? I like what you do. It’s music, right?” That was kind of the impetus. Let’s bring more people together. 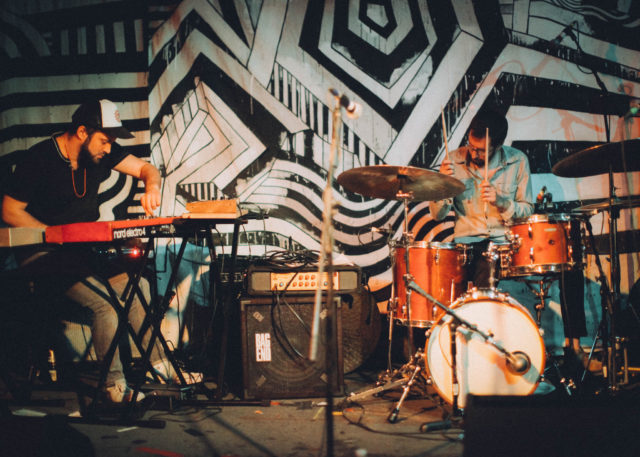 With the improvised thing I’d get people that would be like, “Yeah man, I improvise. I’ve done something like this.” They kind of had this air of, I don’t know, it was almost like a threatening air. Sort of like, “This isn’t new. We’ve been doing something like this.” But I wanted to be like, “That’s cool. I’ve been improvising since I was in middle school, technically.” But this is a greater implication. What I’m talking about is building a music community.

An idea like “Unrehearsed” is beautiful because bands have started because of it, and collaborations, and artistic drives have been created out of it. That to me is what’s important. Segregation runs deep in this city and we still battle that. It’s still a hard thing. I think it’s very subconscious but it’s there. I’m not afraid to say that because I still have people talk to me about it. “How come these scenes don’t come together and this doesn’t happen?” And it’s like, “Well, it’s going to take some time.” These are things we really need to work at.

On the avant garde and the idea of expression

Drobka: I think everything at some point is a choice of expression. So the medium in which you choose, hopefully you found a medium that helps you get out what you would love to share with the world. And for me, from studying jazz and looking at the trajectory of some of my favorite players, the idea of the avant garde was just kind of a label put upon them.

I don’t think I’ve ever met a purely avant garde player, like somebody that has completely disregarded some form of musical history. Ornette Coleman was incredibly trained. Cecil Taylor went to New England Conservatory. Andrew Cyrille was a Juilliard trained percussionist. Max Roach as well. Albert Ayler used to play in blues and R&B bands. Everybody could play.

I think what people get wrong is the idea of expression. And just because you choose to do one thing over the other doesn’t mean you can or can’t do it. I just think you get into the realm of where it’s like, “Well, this is what makes me feel alive.” I guess you could look at the avant garde as a style, but I would look at it more as a choice of expression.

There have been some moments when I’m playing really strict music that I don’t feel that alive. I’ve done a lot of it, but there’s other aspects about melody, harmony, rhythm and form that I’m very interested in and that might not exist in the realms of strict, gridded time.

All the players I love are deeply steeped in that tradition of time. That’s the funny thing that people don’t realize. All of those people that are making a choice to express themselves in a way that might be uncomfortable for somebody are some of the most trained, in control musicians I know. It’s just that they get to a point where the idea of expression is like, “Yeah, I can’t be contained by a certain parameter.”

This record grew out of my love of following the paths of some of my favorite musicians like Paul Motian, Keith Jarrett, Paul Bley, Ornette Coleman, Ed Blackwell, all of these guys that are great players of songs but at some point they kind of freed the song a little bit. They put all of their life into one moment outside of a grid and showed you the cyclical nature of everything. And that’s what started to make me feel really alive. How can I make every moment feel like that? This record was the outcome.