Kim Gordon draws a line from Leonard Cohen to Cardi B

Kim Gordon draws a line from Leonard Cohen to Cardi B 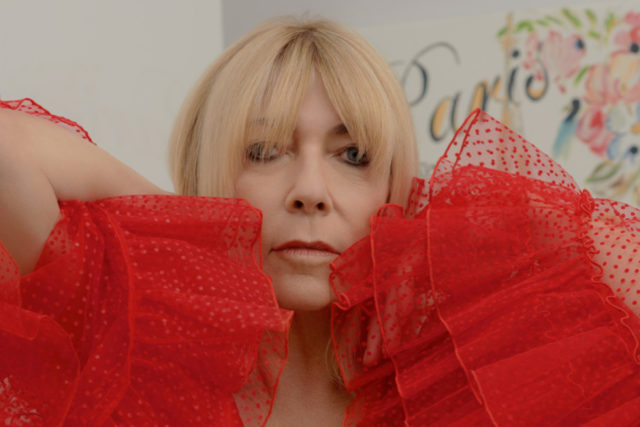 For thirty years Kim Gordon was lead singer of Sonic Youth. Since their break up she just released a bestselling memoir, “Girl In A Band.” And after 38 years of making music she just released her debut solo album, “No Home Record.”

Going into the record, what did you imagine it being? Is this what you imagined it turning out to be?

I don’t know. I kinda didn’t imagine anything. I mean, I did want to sort of do stuff with some beats and my vocal ideas work better with rhythm and, sort of recently I’ve been listening to Cardi B and Lizzo and these kind of bad ass women and rappers, and also just more like a kind of underground rap music, kind of minimal and weird. I kind of wanted to incorporate some of that, but obviously I wasn’t gonna make a hip-hop record.

But I didn’t really know. That first song that I did with Justin (Raisen), “Murdered Out,” which kind of came about in a sideways kind of way. I liked that. So I trusted him and it seemed like he got my sensibility. And so I kind of wanted it to have the feel of, like just breaking up electronics in a way or just kind of like really trashing them out. And I like contrasting things. I didn’t want it to sound like an electronic record or, you know, any kind of specific genre. I just don’t think that way. So, I wasn’t sure exactly how it would come out the whole record.

Yeah. I’m glad that you talked about contrast because listening to the record, that is one thing that kind of sticks out to me over and over. So much of the record is skeletal, is like down to the bare bones, and yet it’s so complex. Every single song on the record. How do you achieve that?

Well I’m kind of a minimalist, and I like the way space is around things. I dunno, like I was thinking lately more about Leonard Cohen and these male singers who are like, kinda more poets and singers and there’s not a lot going on in the music. It’s not really about that. So in a certain way, I really wasn’t worried about the music. I kind of was more concentrating on the words and, although music is evocative to me, it inspires an atmosphere, like that song, “Paprika Pony.” Justin’s brother, Jeremiah, came by the studio one day and he makes beats and is a producer too. And you know, we asked him if he knew what he had, if he had any beats we could use and he played a few things and then he played the one, the trap C one, and I ended up using. And I knew I could do a vocal that would be cool for that. To me the songs, they’re almost more like little mini movies or something than songs.

The storytelling in “No Home Record” is so much different from writing something like “Girl in a Band.” These are two completely different art forms and storytelling in a completely different ways. You could translate that onto an album in a more straight forward story. But the songs are broken down and segmented. What’s the thought of going into writing lyrics on the album as something that is so segmented and broken up instead of something longer, like we know that you can do as well.

Well I mean the difference I guess between poetry and lyrics is that you have the music that adds this other layer of potential meaning. You know poetry, so much is just projected on it. And I guess I kind of treat my lyrics the same way. Like Justin was kind of joking about it, but he’d say, “bring over your amped up, fragmented poetry shit.” And that’s was kind of what it was, yeah.

You know like that song “Paprika Pony.” To me it was sort of, I mean I kind of just wrote the lyrics. I don’t know how I wrote those lyrics, but I always add things when I’m singing. Things just come out of my mouth and it’s kind of like this modern day Adam and Eve, wandering around the garden, on their cell phones.

But that’s something you would never, no one would ever get that.

Right. Are you ever worried about people misrepresenting what you’re saying?

I mean, people do it all the time. I don’t always know what I mean anyway. I heard Lou Reed say that once. But I don’t mean when I mentioned, you know Leonard Cohen or people like that, I don’t think of myself as like a poet or anywhere comparable to him or someone like that, but I just kind of meant that there’s something satisfying about writing and that you can just do it yourself. You don’t need anything else. And, I don’t know… It’s sort of comforting in a way.

Yeah, I get that. We’re getting to the end here and I love asking artists about what they’re listening to now. What’s the last song that you really dove into or couldn’t stop listening to?

Oh God. Well, I have to say, I mean I don’t know if I’m embarrassed, but I have listened a lot to Kurt Vile’s newest record.

I find that there’s a lot to listen to. Like I feel like he’s really got his lyrics in a… He’s kind of mastered this sort of throw away style when just making things work that shouldn’t work. And I couldn’t tell you what specific song.

I liked that… What is the opening song, “Loading Zone” or something?