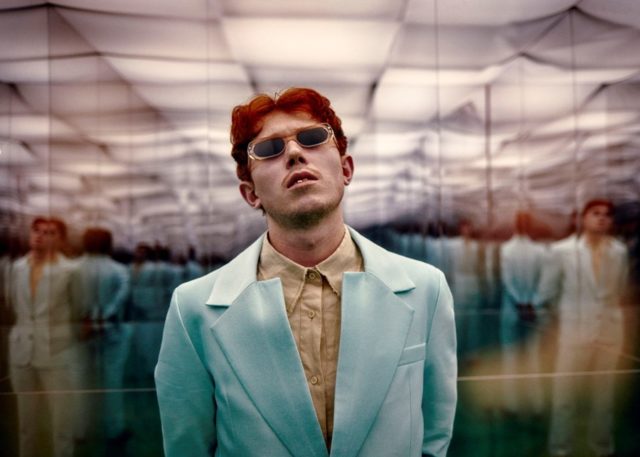 Archy Marshall is the 25 year old beat maker and unnaturally low voice behind his project King Krule. He released his first full-length album in 2013 and just dropped “Man Alive!” When I was prepping for this interview, I asked Tarik Moody what I should ask him and Tarik said, “Ask him how he got to be so cool.” Cool, kind of by nature, evades definition, but hopefully this fills in some of the spaces of King Krule’s brand of cool.

I think you know it’s natural isn’t it? The nurture of it. I remember writing a song when I was 12. I wasn’t in a good place. I wrote a song about stage fright and I played it on stage at this little pub. The actual concept of the song was about how scared I was to play on stage. So I think from then on, I kind of realized I could exercise certain anxieties and demons really easily through this tool and feel empowered by it.

Was that your choice to perform that song or did somebody encourage you to do that?

If I was honest, I wanted to do it, so yeah it was much choice, and no one was like get the hell on stage boy. No one had no whips or anything. I was pretty free to do it by myself. I think I wanted to, you know, I kind of revel in chaos and uncomfortability sometimes and being able to pull through it. I think that was a very clear indication of what was the come in my life, you know?

I think that a bit of that chaos is some of my favorite parts of not only your music but kind of like you as an entire artist, and I think that part of that influence is jazz, or jazz kind of has that bit of chaos in it. How did you discover jazz?

I discovered it mainly through hip-hop. I remember being young hearing the “Stakes is High,” the record, the album and being like, “Wow these guys are really good musicians.” How are they making these great loops, and then I realized they sample most stuff. So I was like, “Oh, ok.”

When I was younger, I remember listening to like certain tracks and headphones and just being like, “Oh, how I wish this part would repeat forever.” So, it’s kind of made sense to me that people would sample something. And then, from there, I would listen to the whole recordings of the tracks which they sampled and then just get into that moment. I really, really listened to it and wait for that moment where they loop and just think to myself how beautiful the first moment, they had heard it and how they chose that bit. I think that’s how I got introduced to like jazz music. I was probably listening to Yusef Lateef and stuff like that, so I got kind of into it from brothers.

Who was the first, or maybe like the biggest first jazz musician for you?

You know I think Bill Evans and Oscar Peterson were pretty big for me, Erroll Garner like many piano players, but then I was really into Pharaoh Saunders. Pharaoh Saunders really connected with me in a melodic sense. He had a different type of connotate on melody, obviously Sun Ra and people. King Pleasure and Chet Baker, Bobby McFerrin and stuff like I really, you know, I took everything away from it. Charles Mingus was really big for me that was listening to punk records.

So I was writing the lyrics and I watched The Omen and I was like kind of got to watch the Omen 2. I was like oh now that I watched both of them and I was trying to of come to the end of the lyrics, I was barely watching the videos, listening to songs, and writing lyrics to the melody. and then I put one of The Omen 3 and, The Omen 3 kind of soundtrack the end of the song for me. This soundtrack  just kind of was the light source in the room at the time is the glare, and so yeah so, I thought it kind and talkable because it’s the one where Damian he’s grown up to be a man comes to president of the United States.

In that song you say, “Don’t forget you are not alone.” Who are you addressing there?

Everyone. The song’s not about the Omen 2 no the song it was just literally, it was just at the same time. I was alone watching the Omen 3, so that’s was cool.

What’s the last song in your life that you heard, and you couldn’t stop listening to?

I guess there’s a few actually, that’s kind of how I listen to music anyways. I think the Nina Simone “Stars” live in Montreux. I kept watching even has good video of it.

What captured you about Nina Simone in that song?

Probably her power and her presence.

What in that song in particular is the thing that grabbed you or a thing?