You Should Know Little Scream

You Should Know Little Scream 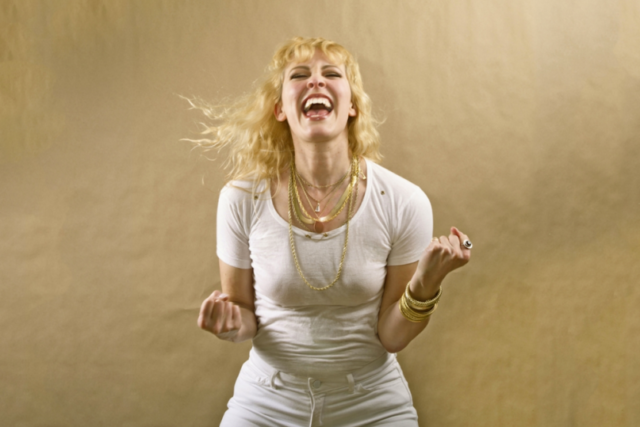 The latest Little Scream album, “Cult Following” was released this year via Merge Records. Radio Milwaukee caught up with Laurel Sprengelmeyer prior to her Eaux Claires performance, while she was pulled over at a roadside petting zoo. We talk about the new album, the various cults we find in our lives, Milwaukee memories and more.

Where they’re from: Montreal, Canada
Their song 88Nine is playing: “Love as a Weapon”
RIYL: Prince, feeling joyful, Arcade Fire

1. How did Little Scream get started?

I started making music when I was young. My grandma was a piano teacher. I started playing guitar when I was 11 or 12. I played violin in school, public school education. Nothing serious in terms of studies like university or anything.

Who did you used to cover?

I did David Bowie covers, Velvet Underground, Brenda Kahn. I went through a period of really getting into her. She was someone that a friend passed along a tape way, way back in the day when I was younger. She was a 90s generation of new folk music from New York City.

Brenda Kahn – “I Don’t Sleep, I Drink Coffee Instead”

2. “Cult Following” feels very different from your first record. How have you evolved?

I had a really open, exploratory approach – that was the same for both records. This new record came after touring a bunch where I did a lot of opening sets which pushed me to do less of the quiet, gentle stuff. There is still some of that on this record, but I wanted to have more joy in it. I’m a joyful person and I wanted to reflect that in my music.

I learned about the recording process on this record. Almost in a painful way, but I just got really, really sucked in and got really hands-on. From a production standpoint, it got more ambitious in terms of what I was expecting from it. I was interested in exploring where I could go with it and whatever sonic references I was paying attention to at that time.

That is how this record got to be the size and shape that it is from the production side of it. Richard Parry made the record with me and he had a huge hand in it when it comes to the production side. He has loads of experience and tons of ideas, but we really worked collaboratively on a lot of those things to make certain soundscapes. He’d throw an idea at something, and I’d throw an idea at something and it would get all jumbled up in there, but I was really hands-on.

Love and relationships can become a cult. Anywhere we’re getting our sense of meaning and identity

3. You are a visual artist also; do the two art forms inform each other?

Now they do for sure. This record had a really analogous creative period with paintings I’m still working on. Much like the record, the paintings I’m finishing are super layered.

They come from a similarly imagined jumping off point. The album cover artwork is a 3D scale model that my friend Mikel Durlam and I built in New York City. It’s based on a painting I’m working on. I had a sketch of this painting and we built a scale model for me to stand in and then we projected the sketch on top of me.

4. Your album is called “Cult Following” which could cover a lot of themes from literal, religious themes to cult brands and lifestyles. Where do you pull it from?

It came unconsciously; I had a lot of religious, spiritual themes and songs about dead people. That felt like the right frame to give the content that was in there.

“Cult” felt like the perfect way to describe the religiosity or spirituality I was thinking about because like you said, it can embrace a lot of things. Anything can become a cult. Love and relationships can become a cult. Anywhere we’re getting our sense of meaning and identity and really wrestling with that. I’m wrestling with a lot of those things.

Love is one of those human needs that isn’t as black and white as food, clothing and shelter…

Absolutely, and it gets us into all this weird territory – our sense of identity and belief. We’re kind of in a cult anytime we stop looking at the reality of something and just embrace the idea of it rather than the reality of it and give over some of our own power of reasoning and power of choice to whatever that idea is.

We can get really trapped in those dynamics sometimes. It wasn’t what I was thinking of initially – I made all the songs first, but then that felt like a really good way of framing the breadth of topics the songs cover.

Did you have religion in your life growing up?

Yeah, Jehovah’s Witness, actually…well, half. My mom’s family was Jehovah’s Witness. She got, they call it “dis-fellowship” — “ex-communicated” is the more general word. She got kicked out when I was young, but I stayed in religion because I was really close to my family, and that community is tight-knit. At the same time, my dad was never part of that religion and he was kind of like every bohemian childhood’s dream father. Taking me to see the Dalai Lama, Allen Ginsberg, Laurie Anderson. He wouldn’t try to impose any rules or restrictions on me and gently held open the door for a really long time while I was basically involved in this cult which was also my religion and my community and everything.

Did you lose your community?

I don’t have ill will toward that faith, I get why people do it. But it’s definitely hard for people trying to get out of it, it’s not the easiest thing.

5. What do you think of Milwaukee?

I love Milwaukee. I think it’s really cool. Every show I’ve played there I’ve really enjoyed. There are some really great spaces in Milwaukee. The theaters you guys have are super nice. The art centers, the riverfront… In terms of the Midwest, Milwaukee is a really cool town that has a lot of culture, but it’s also gritty and interesting. Milwaukee is great!

Even growing up in Iowa, I used to go to shows there. Shows would never come to Iowa so we’d always be going up to Madison, Milwaukee or Minneapolis. Milwaukee was one of the cool towns, it still is. But, definitely growing up it was a place you would aspire to hang out in.

Listen to Little Scream “Love as a Weapon” below: