Interview: Thom Yorke hints at new album and talks about his love for ‘The Hangover’

Interview: Thom Yorke hints at new album and talks about his love for ‘The Hangover’ 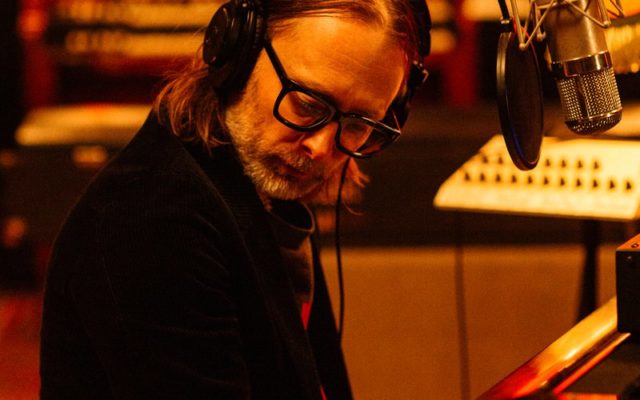 There is one thing that Thom Yorke hadn’t done until recently—score a film.

That was until filmmaker Luca Guadgnino, coming off his Oscar nominated film “Call Me By Your Name” sought to remake one of his favorite films, the 1977 horror classic, “Suspiria.” The original score was composed by Italian progressive rock band Goblin and is a classic in it’s own right.

Thom Yorke said yes and his work on “Suspiria” is what led us to have this conversation.

We both flew to New York and met at Electric Lady studio. The studio was built by Jimi Hendrix in 1970 and is still recording some of the greatest albums made to date.

When Thom walked in, he went right to the piano. Kind of tested it out.

Then he recorded a few songs with just me, his producer Sam and a handful of other people in the studio at Electric Lady in late November. After that, we had fifteen minutes to talk. Below is our conversation. In it, he described the “Suspiria” score as “creating chaos then editing it” and teased a new album, saying he’s still not sure what it will be like, but promises it’ll make sense when it gets here.

Justin Barney: Good. You did the score to the new, “Suspiria” and I thought we should start by talking about the old, “Suspiria.” What was the setting for when you saw that movie for the first time?

Thom Yorke: I can’t remember. I had seen it and then, you know, Luca wrote to me and we started talking about it. So, I just watched it at home.

Thom Yorke: Well, I knew Goblin before I knew the film because I’d sort of happened upon some stuff they’d done a couple of years previous, which I thought was utterly mental [laughs].

So, I was kind of fascinated. Some of it sort of had affinities to some of the things, you know, Radiohead were trying to do. So, it was kind of interesting.

Thom Yorke: Not too far but much more, sort of, like arpeggiated and complicated. Much more complicated than we would do, probably.

Justin Barney: “Suspiria,” the movie itself, is a 1970s art house gore classic. Do you watch a lot of movies? Is that your key genre?

Justin Barney: Sure. Is there a genre you do like? Is there a movie that people will be surprised you like?

Thom Yorke: Why? I mean I really like “The Hangover” [laughs].

Justin Barney: It is a great movie!

I really like 'The Hangover.' [...] I piss myself laughing every time.

Justin Barney: I love that. So then, for the new “Suspiria”—so working with Luca—was the movie done when he brought it to you? Did you get to watch it before you agreed to it?

Thom Yorke: Oh no. I had a script and I talked to him a bit. I went to the, sort of, first couple of days’ shooting. Which was kind of interesting. It was a massive production. It was a crazy old hotel that they had found that they had, sort of, rebuilt in Italy. But no, it was quite nice because it felt like I was part of the genesis of it in a way. I came to it relatively late, but the score was an important element of it and it was, you know, as they edited together I was throwing them bits of score to try to put with the edit.

Justin Barney: So were you writing the score as it was happening? Or would you see a reel after and kind of write for what was going on?

Thom Yorke: Well, it was a tip that Johnny said, “Try and write quite a lot of stuff before you’re sitting down in front of the picture” and I did that because I kind of felt like I had to have my own melodic way into whatever they sent me, regardless. So I’d have something to hold onto if things got messy [laughs]. I was recording stuff on my phone and I was sending it to them, just so they had some idea of the sort of way I was going to go with it. Some of it we just ended up just using the phone actually, because it sounded really good.

Justin Barney: You used recordings from your phone?

Thom Yorke: I ain’t no snob. So yeah, it was a “to and fro” really. They were shooting and sending me stuff. I mean, but then I had other obligations, I was coming back and forward from the studio and being on tour. It kind of basically happened at the same time though, roughly, because the editing went on for ages.

Justin Barney: I would imagine writing a score is quite a bit different from an album because in an album you just have this huge blank space.

Thom Yorke: I know, that was the really cool bit, in a really weird sort of way on sort of two levels. The first is the songwriting bit, you know, I’m writing lyrics but they are not… I am sort of assuming to some degree, character or at least atmosphere from the film. So, I’m not necessarily writing as me. Not that I write as me anyway. But it was more license to not bother, more license to exaggerate or go a certain direction, which I really enjoyed.

The other thing is I’m not in charge of things, which was quite lush in a way. This is Luca’s wrap, right? No matter what happens, it’s Luca’s wrap. So, if he says to me he wants a Sabbath in German for this woman who sings like a man, I’m like, “Alright mate” [laughs].

Justin Barney: Then it’s on him.

Justin Barney: In the original, I saw Goblin perform it recently and he said in order to sound creepy and scary, they were in a studio and he had this big Moog board he was working off of.

Justin Barney: Yeah, how did you make things that sounded eerie?

Thom Yorke: That was the fun bit. Because the obvious place for me to start was when things go out of tune—that’s always troubling. When oscillators beat together, but not quite together. So, that’s kind of where I started. Another thing I was doing a lot was stretching pianos…stretching the sound of pianos and all the overtones you get. A lot of the things were, like, using the modular equipment because using reverbs and how reverbs can create this noise and clouds and really mess things up. But it was nice for me, because it’s not something I normally… normally it’s always in the context of making a record.

Thom Yorke: But you’re doing it for its own sake, you know, but yet for a purpose. It was a nice place to be. I’m not songwriting. In this instance, I’m just creating chaos and then editing it.

Justin Barney: Working off of visual medium as well, you are going on tour. You’re going to stop in Milwaukee. You are working with Nigel and Tarik.

Justin Barney: He is adding this visual element to it as well, and you’re going to be there with Nigel. Are you and Nigel talking about a new Atoms For Peace project or will this be…is there a possibility of this being a new project in itself?

Thom Yorke: It is. We’re desperately trying to finish the record because a lot of what we actually perform in that show is stuff that was written for that show. We need to get our shit together to actually finish it, which we keep trying to do.

Justin Barney: So, it’s like its own thing. How are you incorporating the visual elements into it?

Thom Yorke: It started as, like, a DJ set thing. Then it kind of unraveled and came together in a different way. What Tarik was doing is like a live performance, and the visuals are part of it, so I’m actually sort of scratching my head at the moment. When we finish it as a record, how we get it across to people that it’s… “Yes, it’s a record and yes, it’s a visual thing.” It’s kind of interesting that I finished doing the soundtrack for the film and now I’m doing my own thing. I’m really painfully aware of the visual element of it.

Thom Yorke: Because I feel, to not have the visual element somehow doesn’t do justice to where the music came from, you know? It’s also something I’ve been conscious of from past records that Radiohead have done as well. When we did “Kid A” and “Amnesiac,” we did a lot of visual stuff that was really important to the music.

Like the blips—we did these 15-second, 20-seconds, 30-second bits and pieces—which to me, were almost important as what we were doing in the studio. So, I’ve become confused, realizing that the visual side of what I do is actually quite important to me and how to, sort of, balance.

Thom Yorke: It’s called “Tomorrow’s Modern Boxes” at the moment, which is deeply ironic. It’s not supposed to be serious because it’s sort of vague sarcastic thing about, “Hey we’re using electronics, aren’t we modern?” Which is, believe me, it’s British irony. No one’s going to get it, but we understand it.

I don’t know what the record is going to be called. I mean, I guess it’s under my name at the moment, kind of. I don’t know. I mean, it’s the weirdest thing in the world, you know, I’m going on tour for a month and I’m struggling to explain what the hell it is I’m doing! [Laughs.] Oh god!

Justin Barney: Well, I’m sure it’s going to be great.

Thom Yorke: It makes sense when you’re there, I promise.

Justin Barney: Yeah, I will be there. Do you have your own solo project as well then?

Thom Yorke: No, that’s that.

Thom Yorke: One thing at a time, yeah [laughs].

Or, at least, less than three things at a time would be good.

Justin Barney: I was reading these interviews with you. You were talking about how driven you were when you were starting off. You were so determined and driven.

Thom Yorke: That was one way of putting it [laughs]. Or angry and awkward…

Justin Barney: That’s another. What are your goals as an artist now?

Thom Yorke: I guess my goal is, honestly, to carry on finding in my places where I don’t fully understand what’s going on. So, where I’m out of my depth. What I don’t want to do is be creating music and think while I am creating it, or whatever I am doing, if it is my terrible pictures, or writing or whatever…What I don’t want to do is be sitting there thinking how wonderful it is. At that point—that is the moment I will give up.

Self-doubt is always something I struggled with and I realized that self-doubt, that butt-clenching feeling as I call it, where I don’t really know what the hell is going on. If someone comes in right now and asks me and I can’t tell them—that’s where I need to be a lot of the time.