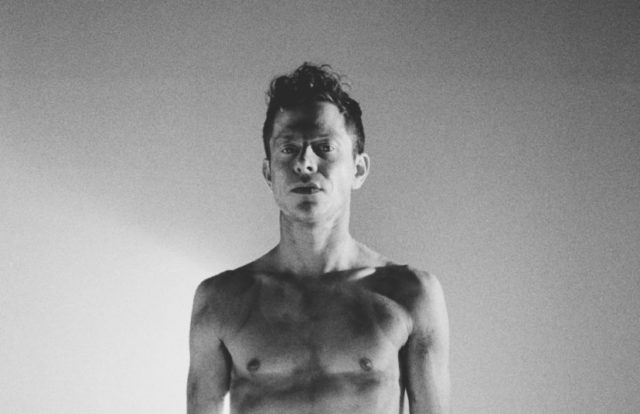 Perfume Genius is the project of Mike Hadreas. His last two albums, “Too Bright” and “No Shapes,” have been masterpieces in making a sound and a statement that is uniquely the work of Perfume Genius. Since the last album, Hadreas worked with choreographer Kate Willich to create an interpretive dance piece called “The Sun Still Burns Here” that he debuted at the Joyce Theater in New York City.

On his new album “Set My Heart On Fire Immediately” he brings the physical presence from that performance. “The songs were very physical and present and so we wanted the recording to be the same,” he says. He has worked again with collaborator Blake Mills, who pushes that sound even further, and he says he’s finally comfortable bringing others in on his creative process while still projecting his own personality. The whole thing comes together in his beautiful new album. We caught up with him in his home via Skype.

I was in New York a couple months ago at the Joyce Theater and I was able to see “The Sun Still Burns Here” in person. It was such a joy to be able to be in the crowd and to see it. That performance was so physical and in listening to the album, I feel like the body itself is a part of the album. What you learned from that experience and that performance and how it comes through in this album?

That kind of shifted and shook up how I think art making can be. Traditionally, well actually, always, writing music, I start by myself and the map is all created and written on my own and in as much isolation as possible and I’m very dramatic about it usually. So I thought that was required of me. I thought that that’s how it worked. If I wanted to access that part of me that can write and the kind of dreamy, kind of supernatural things that I feel happen when I’m writing that I need to be alone and be given space and time to do that.

When we were making the dance, I felt it happening in a room with people. I felt it happening in my body, in a very physical way. I was watching the dancers to move and I realized that they are doing what I do by myself, but they’re doing it with each other and they’re doing it with the air and with the chair, and it shook a lot up for me and I started to experience that and I became really greedy for it and really happy for it.

I’ve been doing this a long time and I am constantly trying to push myself and be uncomfortable and level up, but it’s always been within a specific framework of singing or playing, and to have these other opportunities to be really uncomfortable and push myself in all these different ways and then have that bring so much joy and magic was really powerful. And I think it really informed what I was writing about too and how I processed a lot of the ideas into songs. If I was dealing with like an abstract feeling or something that I didn’t have figured out, so I was just talking about it, I funneled it into something or into a story that was made real and was very physical and something I could talk about, something you could touch and using names and stuff like that.

It looked like you were in your element. Seeing you on the stage, it felt like, this is what this person is meant to do. Whenever I listen to a Perfume Genius album, there’s nothing else that sounds Perfume Genius. How did you achieve that kind of other worldliness in the album?

I think we recorded it with sort of the same, almost like a manifesto. Like the songs were very physical and present and so we wanted the recording to be the same. I wanted us to record as much live and as much all together and with the same group of musicians as possible, so that you could hear the performance and feel the room and it felt like a captured moment in time. My other recordings are more layered and can go into space because there’s lots of technology and layers and all kinds of stuff everywhere. I didn’t want to limit how expansive it can be or how big and huge it can be or how small and intimate it could be. But using that as a framework, I guess.

Most of the time I just have no idea how. I’m less surprised now when I write a song. I used to, every time I would write a song and be like, how did I do that? Where did that come from? And I’m not surprised anymore. I know that I can at least, I’m not guaranteed to write a good one, but I will go into my room and I can make one. And then I keep up the good ones to share. I still don’t really know how it all works. I think the key is really just to do it. That’s what I’ve found. Just making something, just actually doing it.

What do you want the listener to feel when they’re listening to this album?

I mean, the same things that I’m looking for when I’m listening to music. Why make it?

Either something that is so heavy with mood that you immediately almost chemically shift or like your whole body just sinks no matter where you are.

Like you could be at Denny’s or something and then the song comes on and you’re immediately in this dreamscape or in this hyper-intimate or claustrophobic or whatever the vibe is, is so heavy that you’re just immediately there. And then beyond that, I tried to keep conflict in the music and a lot of mess in it. Have dark and light be there at the same time. Have joy and sorrow be there at the same time, because that’s how I feel. I feel all those things shifting and worming around all the time.  So I’m hyper-specific about my experiences and about the things I want to share and I leave things in that are vulnerable or are confusing because that’s what I feel life is. And I want people to be able to listen to my music and feel, even if they don’t feel better, at least feel like they have a companion in not feeling better.

What’s the number one podcast you’ve been listening to in quarantine?

Want to know a secret? I’ve never listened to a podcast! Like 10 years ago I listened to the first two episodes of Serial.

I’ve only done a Zoom meeting once. Houseparty!

Have you made a sourdough starter or bread yet?

No, but there was this thing my mom made called Amish Friendship Bread and one of her friends had to give her some weird slop to start it. If anybody nearby has that, the mother of that. Whatever, fermented, yeast-y, goop. I’m craving that right now.

What is the best movie that you’ve watched so far?

We rewatched “Hanna,” the movie “Hanna.” I’m not going to say her name! Cate Blanchett is in it. But it’s good. It’s like a really intense, fight or flight, music video, hyper-stylized. It’s good. I would rewatch it. It’s cathartic.

What is your go-to junk food item?

Peanut butter. I don’t know if that’s a junk food, is it? The amount I eat is definitely a junk food. I go through a jar in like two or three days. This is like my healthy treat. I crush up a rice cake with peanut butter and maple syrup and I just mash it all together. And it’s like a slop. Super good.

What is the best thing you’ve cooked?

I don’t think I’ve made anything! I sound like I don’t do anything! I’ll tell you what I do like, that is a good snack. I make a tuna salad with horseradish and dill, and I eat it with watermelon radishes that I cut into little chips.

That sounds amazing. What is a song that you have listened to the most in quarantine?

The way that he writes is so resigned. It’s just this sort of acceptance of how horrible things are. It’s sort of easy acceptance. It’s calming to me because it’s not letting go of any it, it’s just resigned to it. I feel like I spend so much of my time scrambling and trying to soothe and figure out, that it’s nice to listen to somebody that is just accepting that this is over, or that this isn’t working.