Rufus Wainwright gives a tour of his home, talks Joni Mitchell and what accounts from his eclectic taste

Rufus Wainwright gives a tour of his home, talks Joni Mitchell and what accounts from his eclectic taste 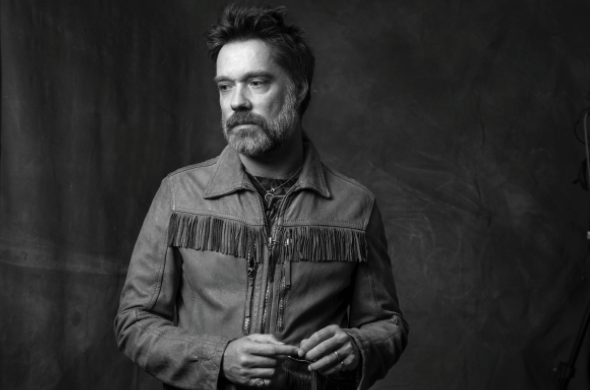 Rufus Wainwright is a renaissance man. He was born into a musical family. His father being Loudon Wainwright III and his mother, the great folk singer Kate McGarrigle. His albums are packed with full orchestration. Since then he has released nine albums with his tenth, “Unfollow the Rules” out soon. He has released several live albums as well, including “Milwaukee At Last!!!” He’s also recorded opera and albums including Shakespeare’s sonnets. We called Rufus at his home in Laurel Canyon in California where we talk about it all.

So you’re at home. What is Rufus Wainwright’s home like?

Well, you know, my husband is German and I’m also a big opera fan, both of us are, so let’s just say its very theatrical. Think of a Wagner kind of scene or maybe something from Hansel and Gretel, it has a kind of idyllic but also somewhat frightening quality with stuffed animals. I mean like taxidermy, and then we do have stuffed animals too because we have a 9-year-old daughter. So it’s very playful.

We have a big bear, a six-foot bear, a brown bear that’s wearing a crown. The crown is from my first opera prima donna. My husband is quick to say we didn’t shoot this bear. It’s an antique. All the taxidermy is antique. We’re not like pro hunters or anything. We have a couple of huge mirrors that we got from the Debbie Reynolds auction that were from sets for Warner Brother’s movies in the ’50s. Think very rococo, high society. It was big, but at least we got it. We love pottery actually. We collect Austrian and Hungarian pottery. So basically it’s a nightmare if there’s an earthquake. It’s an earthquake’s wet dream.

Well, I practice every morning in my robe, that’s a fact. And my husband started filming them and releasing excerpts. I will say that in this challenging time, we’ve expanded that concept with me actually doing entire songs and addressing the public. Before it was more kind of capturing me in my natural habitat. But now that we know that this is actually my natural habitat, I can look up and address the audience. And, you know, I still look fairly fetching in a robe, I’m still more on the model and repose as opposed to old man, quarantined.

I was just listening to “Peaceful Afternoon,” which to me is such a beautiful song of an enduring love. Can you explain why you wrote it?

Well, I’ve been with my husband now for almost 15 years. We’ve been married for about eight, but we’ve been together about 15. At first it was a tacit agreement, but now it’s been codified. On every album, there’s a song about him and there has been since Release the Stars, so yeah, this is just the latest installment, “Peaceful Afternoon.” It’s great for me because I tend to write about some of the darker aspects of human life, but then when I get to focus on our relationship and our marriage, I get to write a love song, which everybody loves.

There are so many songs about heartbreak, which I love listening to, but it is so heartwarming and great to listen to a song that is just about someone loving someone else. I really do love it.

Thank you. And I have always made a point, for better or for worse, to kind of be incredibly honest with my songwriting and so it is true. It’s a song about being in love, but there’s nothing particularly flowery about it. There are some edges to it as well. Which is the truth when you’re in a long term relationship. It’s not all walks in the park.

Could you tell me the influence of Joni Mitchell on this album?

She was always a very controversial figure for me growing up because my mother was a great Canadian songwriter who really chose to, not end her career but definitely slow it down when she had children and she moved back to Canada. My mother Kate was very traditional in her tastes for folk music. And Joni was somewhat verboten, shall we say, in our house growing up. On one hand, I think my mother felt she was a sellout. Musically she didn’t subscribe to her antics. She was hardcore, my mom, in that sense. But then I think also my mother was jealous of her success and her beauty and her power and stuff. This is to say that we never listened to her, at all, at home. It was very discouraged. And then years later my husband, he didn’t know her at all because he grew up Germany where she wasn’t that well known. Then he discovered her music because he had to do a show for her birthday. And he just became this rabid, rabid fan. Like a real Mitchellite. And took me along with him on that ride. My mother passed away about 10 years ago so it was okay for me to go forth to Mitchell-land. It’s been an amazing journey and she’s become a friend and I think for me “Damsel in Distress” the second song on the album, musically is a an homage to her. The song is not about her, but musically, chord-wise, it’s very Joni Mitchell-like.

I sing a lot of her songs now, whether it’s “A Case of You” or “Both Sides, Now” but I think what I’m most impressed about with her work is how toe-tapping and uplifting it can be. It can really transport you in a poppy way. And for me, “All I Want” is a real anthem. It really gets you out of your funk and makes you go forth. So “All I Want” is right up there and then I do a pretty great version of it as well.

I’ve always loved your music, and not just your music, but kind of everything else has, like you were describing your home, it has this classical sense and your ventures into opera and into Shakespeare. Which is difficult, but I’m so glad that you are there as an entry point and to continue it on. What accounts for that taste?

A lot of it I have to say has to do with my curiosity in terms of what lasts. Being an opera fan you come into close contact with music that has proven its worth for sure. And you can really see and hear the ingredients that make that happen. And Shakespeare is a big part of that equation. Because he was, in a lot of ways, Shakespeare was the first opera composer in the sense that so much of the ambiance and so much of the overpowering spirit of his plays, arguably, a lot of them are operas. Much like, the Greek tragedies are. I think a lot of it has to do with opera. The other thing is that, certainly in the world we live in today with what’s going on with the coronavirus and the kind of defunct government, these tried and tested statement and kind of sentiments of humanity are really necessary to just keep me going. So a lot of it was also about survival.

I’m doing a podcast about Liberace because Liberace is from Milwaukee. And I haven’t read anything that you have an interest in him or anything, but I figured I would ask since we’re here. What do you know about him?

When I first started, years ago and I really was different from the whole other kind of spectrum because it was more people like Elliott Smith or Jeff Buckley. There was kind of this grunge music at the time and I was this piano playing, classical music lover, who was quite elaborate. There were some similarities drawn and I was gay, outwardly gay. I didn’t pay too much attention to that at the time. I do feel, though, that as I’ve gotten older and you start to really get a sense of perspective in terms of some of these figures from the 20th century who are just so fascinating and so unusual, the further you get away from when they existed. I mean Liberace is definitely one of the major candidates for that kind of phenomenon. There’s never been anything like him and there never will be anything again. And certainly, I think in how corporate and sort of predictable and also like ‘you’ spaced our consumption has become in terms of the arts, it doesn’t feel like there’s room left for odd, strange things like Liberace anymore and so he becomes more of a treasure. I learned a little bit more about him later on because I became friends with Debbie Reynolds and Carrie Fisher, and you know Debbie, of course, worked with him and had a lot of his stuff from him in her collection. Hollywood was pretty crazy in the 20th century. Liberace was a part of that.

I was listening to a live record that he did, yesterday, and there’s joy in his playing. My grandma loved him and my grandma didn’t love any music. She’s an old Polish woman in Milwaukee and the one person she loved is Liberace. And I was like, why? And then I listened to it and I was like, it’s because, at least what I hear, is just a person who is joyfully playing the piano and it’s infectious.

The past few days I’ve been listening to Liberace. As you’re at home listening to stuff, what something recently that you couldn’t stop listening to?

Living up in Laurel Canyon and then certainly this last period of really diving into the history of this area and of this city, LA musically and I did a show not too long ago at McCabe’s which is the same as the guitar shop and you know, Burt Bacharach came and Leiber and Stoller came and Shirley MacLaine and all these people. So I’ve been kind of drenched in that tradition. And one person I remain fascinated about is Judee Sill who, before Joni, before Laura Nyro, was kind of this dark kind of songstress that I think David Geffen discovered. And there’s this song of hers called “Abracadabra” which I’m a bit obsessed with at the moment. And the song is just about saying those words and everything being fine again, which is a sentiment I think we can all relate to.