The Beths talk to us on New Music Friday

The Beths talk to us on New Music Friday 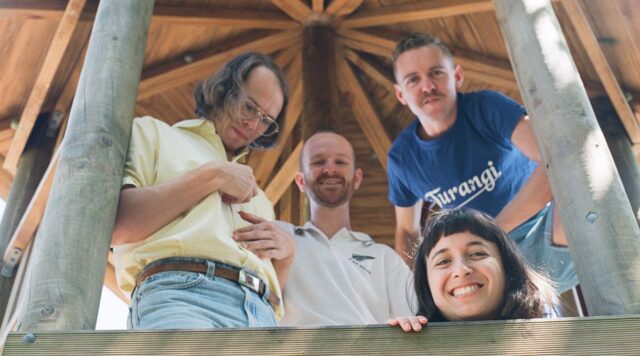 All the way from Auckland, New Zealand, The Beths talk to us about being able to tour in their COVID-19-free country, their journey so far since the 2018 release of “The Future Hates Me,” and their highly anticipated sophomore album “Jump Rope Gazers,” out today on New Music Friday.

Thanks so much for joining me all the way from Auckland. I feel like the last time I saw you was in New Zealand and you had just released the single “Whatever.” I know you guys have been on quite a journey since then from signing to Carpark Records, touring with Death Cab for Cutie in Europe and the U.K., touring through America, lots of touring and now you’re releasing this sophomore album. I’m so stoked for the new record, but before I ask you about the record, I saw that you guys announced a tour in Zealand as it’s safe there to do so and COVID free. Up here in the north, we’re all sincerely missing going to concerts and of course we’d love to have you up here in the studio once it opens up. I wanted to ask, what does that feel like to be able to tour after not being able to for so long?

It feels… it feels amazing and pretty surreal to be honest. I think like everyone a few months ago, we were kind of facing down the potential that it could be years before we get to play again and we feel extremely lucky and grateful that things have worked out the way they have here where we’ve managed to kind of eliminate the virus. And apart from the borders being very, very strictly monitored life was kind of within New Zealand, just kind of managed to go back to a kind of normal, which is great.

That’s so exciting. I may have to pop down for summer and quarantine myself just so I can come and see a concert. I’m looking forward to it.

Well it’s coming into winter now so it’s getting a bit miserable. So it’s going to be a launch of a lot of miserable touring just because, why not?

So you’ve probably been asked this before, but I need to know “Jump Rope Gazers” what does that actually mean to you?

“Jump Rope Gazers,” I mean it’s like, it’s a made-up thing where in my head it’s got kind of a specific etymology to do with me picturing a specific situation but I’m hesitant to say exactly what it means just because whenever I speak to someone or show them the song “Jump Rope Gazers” to somebody who hasn’t heard it and then I ask them what it means I get a different answer and I really like every answer that I’ve heard. So I’m reluctant to kind of just be like, well, this is what it means because I kind of like when songs or phrases or just any kind of art–I like that it kind of can mean different things to different people cause I know that’s the way I listen to music. I’ll listen but I’ll be protecting my own life cause I’m hugely self-centered into the song but I think it comes from just trying to relate. And so, yeah, I like when people have their own interpretation.

I feel like there’s a lot of vulnerability in the first record, “The Future Hates Me” Do you feel this record is a continuation or an expansion on the subject?

I feel like it’s a…. did you say vulnerable vulnerability? Yeah, I feel like it’s an expansion on it because I feel like it was there in the first record, but there’s a bit more of a kind of sincerity and earnestness in this new record. I wonder if it’s, maybe I’ve gotten more sad, you know, and just more like, I feel like I have more of these conversations where I’m trying to just be like what, what what’s going on, what’s happening? But yeah, I think just there’s a lot of still some tongue-n-cheek stuff which was more of a theme in the first record but it’s not gone.

I wouldn’t say it’s sad. I think almost more like self-exploratory or more like open honestly, but that’s for you to tell me really!

That’s, that’s good. That’s the way that I feel. I do feel like more of a bummer lately and I don’t know if it’s new or if it’s always been that way.

There’s a lot going on in the world so I understand that. What’s a track then off of this new record that means the most to you or really resonates with you at this moment in time?

I mean there’s a song called “Out of Sight” which we released a single of. I mean they all mean different things to me but with “Out of Sight” I remember just writing the guitar part when we were out on tour and normally I don’t write on tour so I think I was just quite emotional.  But I think just back then, we were away and felt separated from everybody, but also a lot of our friends and family all were living in different places and have moved away in the last few years and I think I was particular feeling like all of everyone I know and loved was kind of scattered everywhere and people were going through different things and I needed help as well. And we’re all just trying to be there for each other in a way that was hard sometimes. I don’t have a solution of how to stay in touch with people when they move far away cause I find it really difficult, but you just know that you all love each other. I think that’s the kind of the mindset I was in when I was trying to write this song.

I understand that wholeheartedly and  I absolutely love that.

Is there anything else you’d want our Radio Milwaukee listeners to know about the record?

It’s good. I think if you listen to it, maybe you’ll find that it’s good.