The Get Up Kids on growing up

The Get Up Kids on growing up 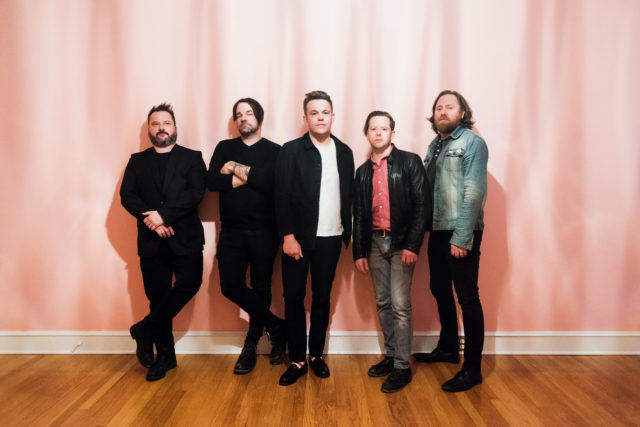 The Get Up Kids have been a big part of a lot of “kids” of a certain age. They formed in 1995 and by the late ’90s and early ’00s they were hitting their stride in the middle of the power pop/emo movement of that era. Before the decade was out the band spun out and disbanded. After a couple solo albums from lead singer Matt Pryor the band got back together and last year they signed to Polyvinyl Records and this year released the triumphant albums, “Problems.” We have been spinning the song, “The Problem is Me,” on 88Nine.

Matt Pryor called us from a hotel in Miami to talk about the band and the new album.

When you’re trying to create something like an album, you have to take this leap of faith that the people who already like your band are going to get it. I think if you’re like, “Oh, I don’t think we should put this song on the record because our old fans won’t like it.” That it’s disingenuous. We’ve made decisions that were based 100% on creativity, and 0% on business. We have sometimes been less successful on those things. But because we’ve always taken the creative approach first, we have a certain amount of integrity where everybody knows we might try something different, but we’re still gonna try and be really honest with ourselves.

You have to do kind of a give and take because you want to play the new songs even if nobody knows them, or you want to play some songs that are just fun for us to play- which right now is the new songs! But then there are the 10 songs that we feel we have to play otherwise the audience will be bummed. You know what I mean? We’re very cognizant of that.

When I get a disconnect from the audience though, I sometimes notice this new contingent of the disgruntled significant other. It’s like a couple, where one partner is really, really into us and wants to be in the front row, but then the other is dragged to come see us play and can’t be bothered. They are right in front of me with their arms crossed or checking their phone. It’s kind of a new wrinkle.

Oh my god, I’ve seen that at shows. You know, I’ve brought people to shows like that…

I’ve been that guy at shows, but I stay in the back. Why do you want to be in the front if you’re bored?

We are playing “The Problem Is Me,” right now. Could you tell me about the meaning of that song?

Well, it’s a story of a friend’s second divorce. At one point he was kind of like, “You think it’s me? Do you think I just shouldn’t get married ever again?” And I was kinda like, well, it’s at least half you. No relationship is a one way street.

The song is about taking personal responsibility, and admitting that you shouldn’t be so mad at someone for leaving.

That can be a tough thing to admit.

Well, you know, that’s why we go to therapy.

And then Rob had this guitar riff and then we arranged it trying to create a blur and bounciness to it. We were really happy with the way it turned out. I had originally written the song as a full story, so it never repeated. The chorus was actually different every single time.

We’ve made decisions that were based 100% on creativity, and 0% on business

What are you most proud of with this record?

I really liked the song “Common Ground” that we had Kori from Mates Of State sing on. She just came in and added this kind of like, “Nah, Nah, Nah, Nah,” that was exactly what the song needed. And I dunno, I like the introspective songs on the record, like “Salina” and “Common Ground.” The funny thing about “Salina” is that it’s this silly little slice of life- not really a song about much of anything, but it’s this really epic song. We thought about writing bigger lyrics for the song, but it’s a slice of life. Normal life.

What is “Salina” referring to?

Salina is a town in western Kansas that’s about two hours away from where we live. The story of the song lays with my wife and my son’s relationship. It has this component of me being gone, that we’ve always had the whole time we’ve been together. But eventually when she had to go to Salina for a work training for two days, I surprisingly didn’t know what to do. I was just like, “What is wrong with me?” When we flipped our typical dynamic, I was weirded out. I try to be better about it now.

What’s the last song you couldn’t stop listening to?

Matt Pryor talks about trusting the audience he loves, small towns in western Kansas, and the problem of the begrudging concert partner