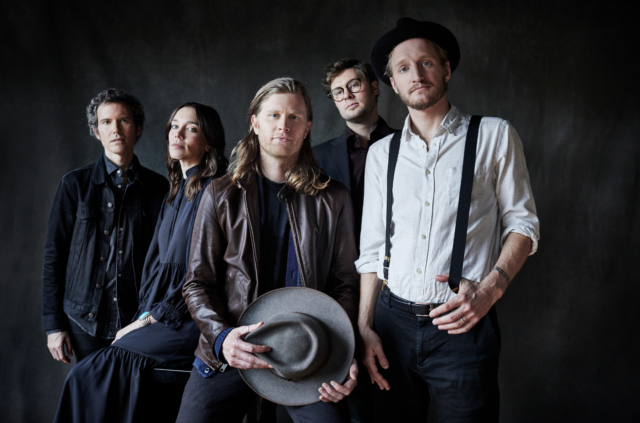 Jeremiah Fraites is a co-founding member of The Lumineers. A natural piano player, drummer, mandolin player and a just-about-everything-else player, he and singer/guitar player Wesley Schultz formed the band in 2005 in Ramsey, New Jersey. Since the two have gotten together their self-titled debut has gone triple platinum, they relocated to Denver, they released a fantastic third album, “III,” in 2019, and they are doing a stadium tour that is coming to Milwaukee’s Fiserv Forum on March 11.

Below is our conversation with Jeremiah Fraites of The Lumineers.

What was your first favorite song?

There’s probably, I mean it’s my recollection, it was probably something by Beethoven. I remember, for some reason being introduced to Beethoven at a really young age and you know, the song “Ode to Joy,” I think that was my first one, which I think is based off his ninth symphony. It was like, growing up, I listened to Beethoven, my older brother listened to Bach or maybe Mozart. Maybe he liked Mozart? Is that the same person? No. I had just grown up and it was probably something by Beethoven, which was a strange way to maybe be introduced to music, considering where I’ve come to. But, something like that.

I would certainly say nontraditional. Why the classical bend?

I mean, I don’t know. It was something that I must have heard and then maybe my mom bought them for us, but I just remember vividly being in the living room of the house growing up in Ramsey, New Jersey and the CD on and it was playing this classical music and it was really beautiful, and just being drawn to it. I didn’t understand what it was. I just remember it was doing something for me emotionally, I guess. And I didn’t even understand, I wasn’t aware of what was happening. I just remember liking the feeling or being interested by the feeling.

Yeah, It’s so vivid, you know, especially when you’re a kid, that music has so much life in it.

What is the first song that you learned how to play on an instrument?

First song? One of the first memories I have is trying to learn “You Shook Me All Night Long” by AC/DC on the drums.Yeah, that’d probably be it.

It was easy to do the beat because it’s actually a really simple like, [vocalizing drums]. It’s really easy, but then there’s this one drum fill, right after the first chorus that I could do the fill, but then I couldn’t go back to the beat and I just didn’t understand like how do drummers do fills and go back to the beat they were just playing. So it was, it was tough. I mean, it’s a really simple song, but it’s tough.

How did you get from Beethoven to AC/DC? Bit of a jump there.

Yeah, I remember it was probably influence from my older brother and probably some of my parents, but maybe even more predominantly my brother. It was listening to Beethoven and I think he listened to Mozart and we used to argue about like, you know, who was better and whatever. I don’t know what grade that was, but then eventually it was listening to his music he was listening to, which was AC/DC, Pink Floyd and Guns N Roses. And he played a lot of guitars, so I can remember listening to him playing “Welcome To The Jungle” trying to learn that on guitar, learning Pink Floyd guitar solos. So then I was into that type of stuff. And then I think one of the first two albums I bought was Bush’s “Glycerine” or “Sixteen Stone” that had that song, “Glycerine” on it. And then the other one was probably like Puff Daddy’s, “No Way Out” which I think was the edited version.

And then I think I felt compelled to maybe listen to what my peers were listening to, which at the time was probably Puff Daddy and Biggie and you know, whatever was popular. And then in high school I got into Radiohead, Squarepusher, Aphex Twin and Dream Theater, a bunch of bands that were kind of like Metallica. I was really heavily into Metallica in eighth grade, trying to learn those drums and stuff. I would go through phases.

What’s the first band that you felt like, “This is my band that’s special to me and nobody elses, this is mine?”

Why do you feel that way?

I don’t know. I think it’s a selfish thing or it’s some sort of weird illusion and I think we all take on. I think we all do it to this day. When you’re at a concert or when you’re listening to something and you’re like, “I’m the only one that’s feeling this, this much. I’m the only one that understands this, this much. There’s no way anyone else could understand it as much as I do right now” or something like that. And maybe everybody’s thinking that same thought strangely. I think we take the music we listen to and we intertwine that into our personalities and who we think we are as people. I think I just took that on with that band and then it’s, “oh wow, this feels like it’s speaking right to me and I feel like I understand these guys musically” and what they’re doing is just brilliant.

Do you have a favorite Radiohead song?

What about it sticks out, of all the Radiohead songs that there are?

Probably because it’s so simple compared to all the other ones they did. There’s just something about Thom’s voice when he sings it. And I think it also is tied to a memory I had while listening to it, where I was studying abroad in London and it was the first time I was ever overseas and being in London and being by myself and someone showed me that song. I think it really got kind of melded into that memory. So I think that helps.

What is the last song that you couldn’t stop listening to?

There’s this Italian artist, his name is Coez. And there’s a song called “La tua canzone”and it means “your song” I think. And my wife is from Italy, so we do listen to some Italian music and it’s a really cool song. I don’t understand all the lyrics, but it’s really cool, it’s grown on me a lot.

Is it a pop song or does it go back to like those classical songs that you were talking about before?

Do you know what it reminds me of? It reminds me of something that Sublime was doing. It reminds me of a pop song, that’s not written to be a pop song. Which I feel like was Sublime. You know, like a “What I Got” essence, but it’s not that song. But, I think it’s kind of almost like hip-hop pop. He has that kind of hip-hop flavor in the music, but it’s also just cool chords and I just like it.

Finally, the last song that I want to talk about is, what’s a song that reminds you of your parents?