Y La Bamba on vulnerability, love for family and discovering self

Y La Bamba on vulnerability, love for family and discovering self 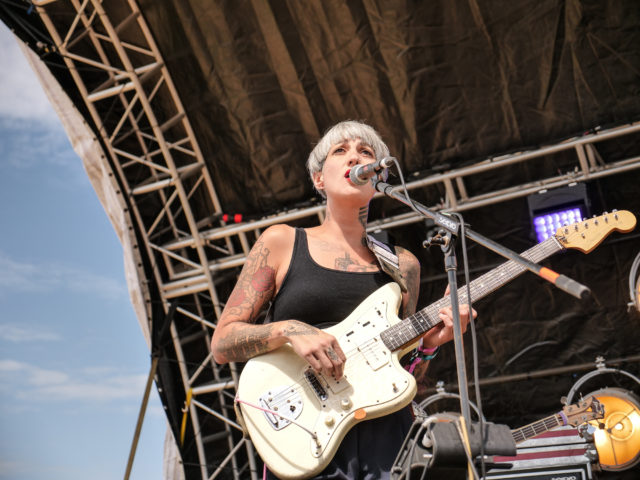 On Labor Day weekend I got the opportunity to interview Luz Elena Mendoza, also known as Y La Bamba. Click the audio to listen to our chat below.

To break the ice I started off the conversation with a question that 88Nine’s Dori Zori always asks during her interviews. What does your childhood smell like?

It smelled like smoked vegetables, carne asada and wood. My parents worked at a saw mill and their clothes would be covered in like plywood. That smell was in the garage or on and my dad’s clothes whenever I hugged him.

I noticed a sonic shift in from your first album “Alida St.” to now “Mujeres.” What was the thought process behind making such a powerful record?

It’s always been an exploration and it’s crazy because we’re all in our worlds. I’m in my own world and the more with “cognitive dissonance” and realizing how things are playing out, I’m like, ‘WHOA, okay!’ I’m understanding so much more about myself as we speak. Music has been something that I came across in my early age and it wasn’t because my parents gave me an instrument, it’s because I heard Mariachi music, grouperos and boleros. I was influenced by the harmonies and the ability to express yourself so passionately, it was such a normal. However, I’ve always written songs on my own, even if I didn’t have any instruments. It was a way to communicate.

Fast forward and being where i’m at now, I never really have expectations for people to hear what it is that I’m doing. When I write or when I am learning something new, whether it’s gear related or that I can be my own producer, that is a big deal. I’m just starting to enter safer spaces where I can explore that and also claiming my space. It takes a little bit of both and that’s why it’s so different. I’ve been growing as a person and instead of seeing what you can take from me, I want to invite you to share with me as I am documenting sound and my story. That’s how I see when I hear musicians like Juan Gabriel and Cat Power.

I feel like what went behind this album was just pure vulnerability, not being afraid of it and just doing it. There were a lot of tears shed, because I was thinking about my mom. This album was specifically for my mom and everything I do is for her. She may or not really understand that it’s for her, but I’m really fighting for her, because she’s still busy surviving. Every single album I’ve ever made or anything I’ve ever done has always been for my family. They’re the first people that come across my mind and stay with me. When I go up and sing, it’s exhausting. Going up and playing every single day, I think about them. It’s hard to deny that. It’s very charged by the behavior that surrounds healing “ancestral trauma” and still protecting my family and myself.

The Latinx community doesn’t have consistent spaces like Los Dells for bands like yours to play. What’s the importance of Los Dells?

Well, usually when I’ve played around this area, which hasn’t been a lot, certain types of crowds that are genuinely present, but I always have to do a lot of labor to protect myself and make sure that I feel safe. Are they going to receive this well? Is that even important? I just wanna make sure that I just wasn’t someone’s good Thursday evening of sound and ethnic tokenism. I don’t want to be that. I played Bumbershoot and like Seattle loves us. We have a good relationship with Seattle, but I was excited to play this festival because of the lineup. Now because I am here in this space, I trust that we’re all going to be in the good hand. I was like, ‘Whoa! Okay, this obviously for Latino communities! And hell yeah, bring all this to Wisconsin. I don’t even see that in Portland!’

Since our conversation a few weeks ago, Y La Bamba has dropped a new EP called “Entre Los Dos.” The music continues to represent what she’s about, what she’s learning, while sharing the culture with her fans. Here’s the latest single, “Gabriel.”

Thank you Y La Bamba, Felix Contreras from NPR Music’s Alt.Latino, the crew at 88Nine and most of all the team at LOS DELLS!