You Should Know The Districts

You Should Know The Districts 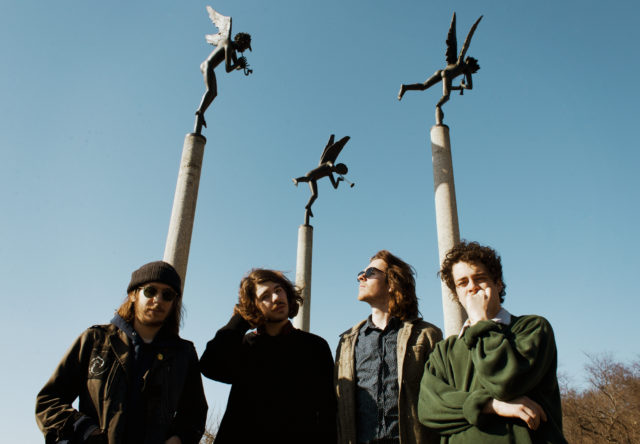 Radio Milwaukee recently spoke on the phone with guitarist and singer Rob Grote from Philly’s The Districts in between tours. We dove deep into the band’s newest release, Popular Manipulations, and discussed the growth of the band, recording process, and the manipulations we perform in our daily human interactions.

Where they’re from: Philadelphia, PA
Song you’ve heard on 88Nine: “If Before I Wake”
RIYL: anthemic indie rock, The Killers, Arcade Fire

5 Questions with The Districts

1. Is Philly your home base?

Yep, we’ve been here for four years now. We grew up in Central Pennsylvania in a town called Lititz. Well, three of us grew up there, and Pat our guitarist grew up outside of Philly.

Philly seems like it has a really strong music community. Did you feel that in your hometown or do you feel supported by it now?

Not much where we grew up, which is why we moved. In Philly as a whole, it’s a pretty supportive community; even bands we aren’t friends with, everyone is familiar with each other and supportive. There are little communities within it, it’s a whole mishmash and there is always stuff going on. A ton of our friends are making stuff, which is nice, it’s a fun creative environment. We have The Districts, and our friends play music with each other on the side, too. It’s really cool.

I feel like where we grew up, you knew who all the musicians were. I guess in Philly you know who all the musicians are because everyone is a musician. Certain bars, at least half the room are musicians of all sorts. A lot of people do it full time, a lot of people do it for fun, but it’s definitely a nice environment. There are good ideas floating around. When we’re off for a while, even when we aren’t touring, we end up playing shows. Me and Braden do Straw Hats with my roommate Breshon, which is our punk band. Sometimes I’ll play guitar for our friend Keith, it’s a cool thing, it’s fun.

Me, Braden and Connor are the only original three who grew up there [Lititz]. We’ve all kind of known each other from being in a small town. It came together, just playing around for fun at first and then we really liked playing together so it pretty quickly turned into trying to write songs. We just happened to stick with it. We all really liked making music with each other so we kept doing it. Then we all moved to Philly and were planning to all go to school.

We were on a tour with our friends Pine Barons right before we were supposed to start college. Then things started to fall into place. We didn’t sign right away, but we had talked to Fat Possum and some other things like that, where it just seemed like we can do it. That was four years ago and we’ve just been doing it since them. 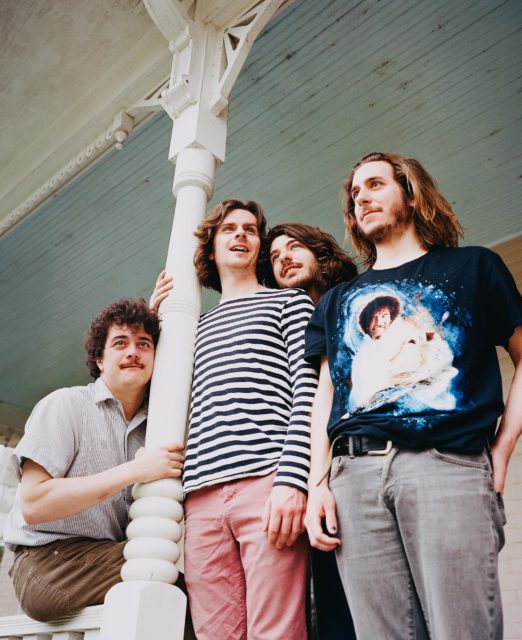 The Districts by Pooneh Ghana

2. I read A Flourish and A Spoil was recorded in the woods in Minnesota. Was the experience different for your new album, Popular Manipulations?

I really, really loved when we made A Flourish and A Spoil. I loved being out there. We’d make food or go into town, but for the most part we’d record all day outside of the occasional Netflix in bed. It was cool to focus on it in that way.

For the new album, Popular Manipulations, it was a little different because we were going to do the whole thing with John Congleton. He lives in L.A., so we did some of it there, which is kind of the opposite, you know? We recorded a bunch of songs there and we went into it with a different mentality. With the other one we did ten days straight and that was it. With this one we were going in with the impression that we wanted to record more than enough music. Just to kind of give us more to choose from and it was easier to be less precious about it, too. When we have a bunch of songs we’re recording it’s easier to just say, “Well this one doesn’t fit.” And not get too worked up about it.

We did ten songs with him out there and then we were going to try to do six more with him, and we knew all ten wouldn’t be on the record. We were in Philly recording at Head Room, which is a studio run by our friend’s brother where a lot of cool records have been made. We were just recording with our friend Keith (Abrams) from Pine Barons who we are good friends with and toured with. At first we were making demos but went into a studio because we were tired of making shitty demos in our practice space and wanted to change it up.

Then, we did a few; “Ordinary Day,” “If Before I Wake” and “Violet” and a few others that aren’t on the record. Not being precious about it, they came out of us as demos with Keith and we really liked the way those sounded. We ended up recording seven songs with Keith and used four of the songs from the session with John.

We’ve been recording ourselves a lot more for demos and I was recording a lot in my room, and we just got more into the process of recording and I guess that influenced it a lot in the sense that we worked with John and did stuff with other people and us ourselves had gotten really into production. So it was really cool to arrange everything ourselves, and look at it in a different way.

With Keith we could stay as late as we wanted. I really liked working with John and we could understand each other in a good way, but with Keith, we’ve all recorded with and played music with him in so many different contexts. From touring with his band; I was playing guitar for him sometimes, and Braden has recorded stuff with him… we have a very intimate rapport with each other. It’s really cool because it’s a very seamless understanding of ideas.

With the idea of manipulation and control, comes power. You’re ultimately powerless over people and some of the songs and thoughts were about desperation - basically powerlessness.

3. There are more layers to Popular Manipulations, did you approach arrangements differently on this record?

On the last album we specifically went in trying to make it a live type of thing. There were overdubs, but it was more about us playing live in a room. For this record, we were very much trying to make a record. We were trying make a cool sounding recording; making interesting little things, going in for our own self-satisfaction which was really fun.

4. The word “manipulation” feels negative, but every human interaction we have, positive or negative, is still a push and pull. I was curious what the album title “Popular Manipulations” means to you?

That’s what I was thinking about a lot. It definitely has a very negative connotation, and while some of the things I was singing about was negative, a lot of it wasn’t. I was thinking about how, when someone dies, you have to manipulate your own thoughts to get through the day because you’re grieving. Or trying to get someone to understand your point of view, you might have to be manipulative. Certainly there are negative ways, but thinking about general interactions – romantic or otherwise, I was trying to paint a picture of that and not necessarily say what’s right or wrong.

With the idea of manipulation and control, comes power. You’re ultimately powerless over people sometimes and some of the songs and thoughts were about desperation – basically powerlessness. Is it right or wrong to want power over something or a friend? Like, should I want to have power over this person? Even if you just want to help them feel better?

5. What’s next for The Districts?

For the most part, when we’re off we’re all usually trying to be creative and working. We just got a new practice space after not having one, so we’re definitely planning to write, but we’re also setting it up to be a recordable studio. Not professional level, but trying to pick up a piano tomorrow from Craigslist… a lot of our time off coming up will be setting that up, which will be fun.

I’m not sure what we’ll do with the next record, we’ll probably do another combo move because we really liked what we did; recording in a studio elsewhere and also recording here. I feel like we’ll record some ourselves and bounce around.

You can see The Districts perform in Milwaukee on December 6 at  The Back Room @ Colectivo
Tickets and more info: pabsttheater.org/event/thedistricts2017

Watch the video for “If Before I Wake” below: