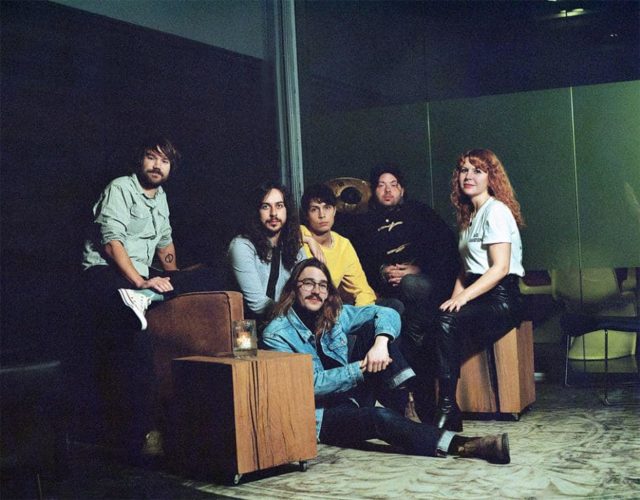 This week’s download comes from the group Altin Gün. You have seven days to download their song “Yuce Dag Basinda.”

Amsterdam’s Altin Gün recently released their vibrant new single “Yüce Dağ Başında.” The flirtatious dance track features lead vocals by frontwoman Merve Dasdemir and showcases the new synth-driven Europop direction the band explores on its forthcoming new record Yol, due out February 26. “Yol” is the full-length follow-up to 2019’s Grammy-nominated LP Gece. The new album also features the previously released single “Ordunun Dereleri,” of which MTV raved, “The band has made waves for its athletic, psych- and funk-inspired romps through music of the past, and on the ice-cold ‘Ordunun Dereleri,’ they’ve never sounded cooler.”

Turkish psych folk band Altin Gün are easy to fall in love with. The band, which hails from Amsterdam but comes from various backgrounds (Turkish, Indonesian, Dutch) create music that opens doors between traditional Turkish folk songs and psych.

They’ve built a strong reputation for fusing past and present to make brilliantly catchy, upbeat pop music, as seen with their Grammy-nominated second album, Gece. Yol, their third album in as many years, continues that trend; while unveiling a number of sonic surprises.

It should be no surprise to learn that the band again draws from the rich and incredibly diverse traditions of Anatolian and Turkish folk music. But however familiar the story, Yol is not just a record that reframes traditional sounds for a contemporary audience. The album, which often presents a strongly international, poppy sound, also signals a very different approach in making and recording for the band. Singer Merve Dasdemir takes up the story: “We were basically stuck at home for three months making home demos, with everybody adding their parts. The transnational feeling maybe comes from that process of swapping demos over the internet, some of the music we did in the studio, but lockdown meant we had to follow a different approach.”