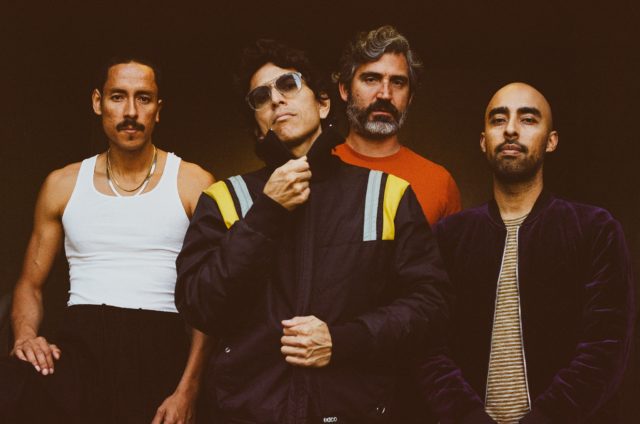 This week’s download comes from Chicano Batman and their latest album “Invisible People.” You have seven days to download their song “Blank Slate.”

Like all the most iconic music born from the West Coast, Chicano Batman’s Invisible People offers an instant escape into the beautifully strange world they inhabit. Throughout their fourth album, vocalist/keyboardist Bardo Martinez, guitarist Carlos Arévalo, bassist Eduardo Arenas, and drummer Gabriel Villa channel the kinetic spirit of Los Angeles into a wildly shapeshifting sound, ultimately finding an unstoppable joy in following their most outrageous instincts.

In creating the follow-up to 2017’s Freedom Is Free, Chicano Batman again teamed up with Leon Michels—a producer/songwriter/musician who’s worked with The Carters, A$AP Rocky, and Lee Fields & the Expressions, and performed in such bands as Sharon Jones & The Dap-Kings. Though Martinez partly tracked his vocals at Diamond Mine Studios in Queens, much of the album came to life at Barefoot Studios: the legendary Hollywood spot where the likes of Parliament-Funkadelic and Stevie Wonder recorded in the ’70s. Mixed by Shawn Everett (Vampire Weekend, Alabama Shakes, Beck), the result is Chicano Batman’s most imaginative body of work yet, a collection of songs that could only come from their own idiosyncratic minds.

While Invisible People embodies elements of hip-hop—especially in its endless barrage of addictive hooks and hard-hitting beats—the album also mines inspiration from krautrock acts like Can and Neu! and the Nigerian synth-funk of William Onyeabor, along with genres as disparate as R&B and prog-rock. As the band expanded their sonic identity, Martinez made a point of matching the album’s dynamic sound by bringing more grit and attitude to his vocal delivery, as well as changing up his lyrical approach. “I used to have this preoccupation with trying to be super-poetic in my lyrics, and now I’m more focused on making it sure it flows and it moves, because that’s what’s going to make people really feel something,” says Martinez. “I feel like I was soul-searching on all these songs, but it’s just a different way of doing it.”