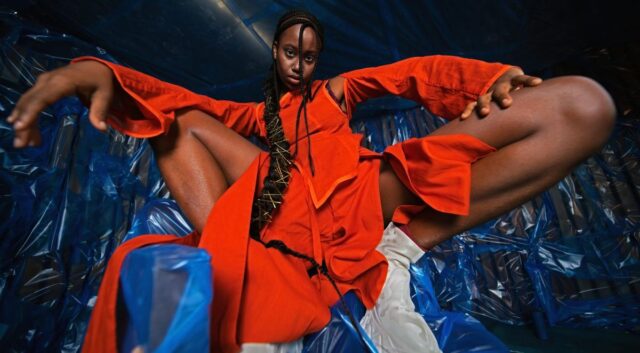 This week’s download comes from Denai Moore and her new album “Modern Dread.” You have seven days to download the song “Don’t Close The Door.”

“Sometimes, in the current climate of the world burning, I’m like, ‘How important are my feelings?'” says Denai Moore thoughtfully. The Margate-based singer-songwriter doesn’t do small talk; she plunges straight into the biggest and most intimate of topics, like what it means to be an artist in a turbulent time like 2020. “But it does feel important. What else would I do? Everyone has feelings, and there’s something very reassuring about documenting [them]. I think art is this voice that’s inside of all of us, whether it’s in, like, how you make your coffee, or reading, or whatever you do in your day that makes you feel heard by yourself. There’s something like a mirror in art, that’s amazing.”

It’s this intricate line of thinking that has lead Denai to create her most complex, personal and political work to date with her third album, Modern Dread. Her piercing soul vocal first commanded attention on SBTRKT’s 2014 album Wonder Where We Land when she was just 21, and since then, the British-Jamaican artist has made waves with her solo releases. She started out with robust piano ballads on the Rodiadh McDonald-produced Elsewhere in 2015, before shifting into lighter, hazier textures on 2017’s We Used to Bloom, a celebratory record all about self-acceptance. Drawing critical acclaim from The Guardian, The FADER, Vice, gal-dem and more, her solo work to date has cemented her as one of the UK’s brightest indie voices.

But while writing Modern Dread, she dug deeper than ever before, and the result is her most nuanced songwriting to date. “As I was writing the album, I felt these deep feelings,” she reflects. “It’s about that, but also about the world – about global warming, and my place and significance in the world as a human being. So a lot of it is this heavy sense of dread.”

She hadn’t made firm plans for her third album, but it was when she first worked with Alex Robertshaw – guitarist and keyboardist in Everything Everything, one of Denai’s favourite bands when she was a teenager – that it seemed to click into place. Their first session yielded three new songs, and Denai found that Alex helped her to get out of her musical comfort zone. “Each session felt like new ground for me,” she says. “He pushed me in a way that felt really essential, just for me to experience myself that step further. I would suggest stuff like, ‘Maybe I could come in here, sounding like a siren’, and he would go to the next level and be like, ‘Why don’t you hum, and then screech?’ I love that spontaneity. I love the risk. I love like feeling like, ‘Okay, does this sound kind of…insane?'”

While the album speaks to both personal and global anxieties, Denai’s life since the release of We Used To Bloom has mostly been a peaceful one. Modern Dread was made over a period of two years, during which time she moved to Margate with her girlfriend, the first time she’s left her familial home of London. “I love it there,” she says. “It reminds me of my childhood, because I grew up in Jamaica, so being by the sea feels like home.” She also started her own vegan Jamaican supper club, Dee’s Table, after being frustrated by the lack of vegan jerk options she could find. It turned out to be another important creative outlet for her. “Cooking is like a form of meditation; like self-care.”