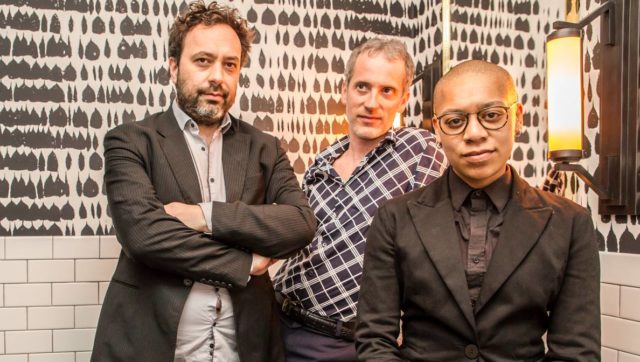 This week’s download comes from the band, Joon Moon and their new EP called “The Tiger.” You have seven days to download their song called “Tiger.”

Established in the Montmartre area of Paris in 2014, Joom Moon is the meeting of House producer and Nouvelle Vague collaborator Julien Decoret, drummer Raphael Chassin and American expat and singer extraordinaire Krystle Warren, who previously worked with Hercules & Love Affair.

The Tiger EP comes after the release of 2 critically acclaimed EP’s, “Chess” and “Call Me”, and serves as another foreshadowing into their upcoming album “Moonshine Corner”, which will be released in September.

As with their previous offerings, the band’s commitment to their retro aesthetic is no afterthought. Recorded in their custom designed Studio 237 in Paris, the production relies heavily on vintage instruments such as the Radio King, a 40’s battery that has become a sought after collecting piece, or the Hofner 1968 bass that Paul McCartney made famous. On the second chorus of the title track, the unique sounds of the Cristal Baschet organ can be heard supporting Krystle’s dramatic interpretation. This use of old sounds and recording techniques gives Joon Moon’s music a sense of timelessness, and is the basis from which the band decides to move forward, mixing in more modern influences such as a sax line that could have been written by Steve Reich or the repetitive nature of their song writing which espouses the codes of dance music.

With Tiger, the band’s social concerns are starting to come forward. A timely piece from a Franco-American band about the need to question authority and the power structure of society, Tiger sees its tension build up like an ominous populist, and turns into defiance. Art and love combining in a movement towards emancipation.