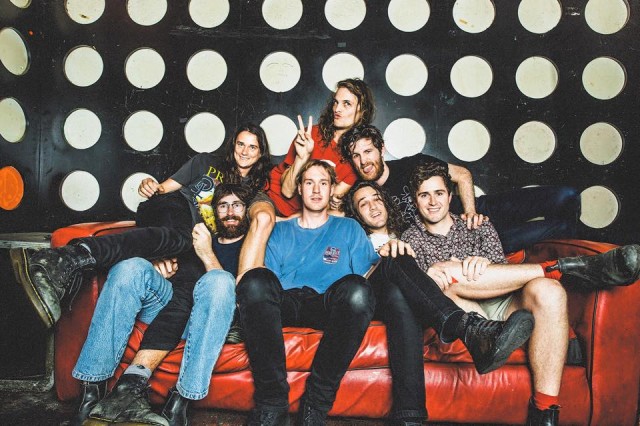 This week’s download comes from the Australian psychedelic rock band, King Gizzard and The Lizard Wizard. You have seven days to download their song “Gamma Knife,” which comes from their forthcoming album Nonagon Infinity due out on April 29.

Clear the launch pad – Melbourne septet King Gizzard & the Lizard Wizard has confirmed a new LP, Nonagon Infinity, out April 29 on ATO Records. This high-octane, face-melting 9-song collection has been ingeniously crafted as the world’s first infinitely looping LP – each track seamlessly flows into the next, with the final song linking straight back into the top of the opener. Zane Lowe premiered lead cut “Gamma Knife” on his Beats 1 radio show on Apple Music. Hop onto the Gravitron and watch the video for “Gamma Knife” now, via Stereogum: http://bit.ly/1QJz0fU

Recorded at Daptone Studios in Brooklyn, work on the album began in 2014, around the release of the bands acclaimed LP I’m In Your Mind Fuzz. Ever-prolific, it took King Gizzard two years and two additional albums to fine-tune the concept and music that would become Nonagon Infinity. In that time the group has zigzagged between 1960s beach-pop, stripped down acoustic psych, and densely packed prog, while always keeping the seeds of Nonagon Infinity fertile.

This all makes Nonagon Infinity an intricate, astonishing culmination. “We really wanted to focus on things that felt good live,” explains frontman Stu Mackenzie. “We’d grab a little riff here or a little groove there, and we’d jam on them and form songs. I wanted to have an album where all these riffs and grooves just kept coming in and out the whole time, so a song wasn’t just a song, it was part of a loop, part of this whole experience where it feels like it doesn’t end and doesn’t need to end.”