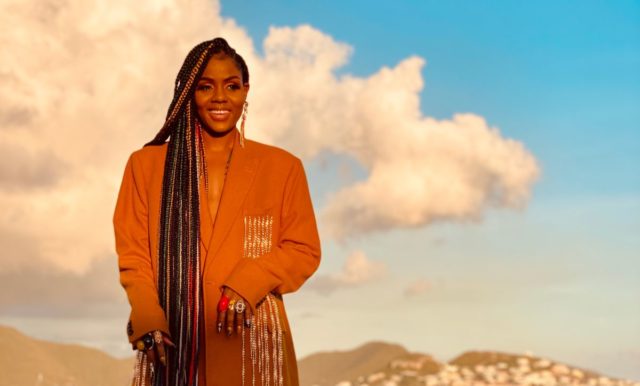 This week’s download comes from the Caribbean artist Navy. You have seven days to download her new song “One Shot” which samples Deniece Williams’ 1976 hit “Free.”

Navy is a small island girl with big dreams. Coming from Dominica, there were few Caribbean musical heroes for her to look up to on a global stage, and even fewer Dominican ones. She’s lived in Martinique, Guadeloupe and Barbados, and is a proud representative of her island. In her career, she aims to be a role model for other Caribbean musicians looking to make it in an industry that’s largely focused on and in the United States and the UK. “In terms of being an example to other Caribbean artists, I would love them to look at me and be like, she’s from the tiniest, bushiest island and she made it, there’s a chance for me. I don’t want Caribbean artists to be in despair anymore, thinking that Rihanna was one in a million or that you have to be Jamaican. Each island has its own identity, accent, history, stories, experiences, and there’s a place for everybody.”

As a Black Caribbean woman working in music, Navy has experienced what it’s like to shrink herself to fit others’ perceptions of what she should be. After dealing with her mother’s worry about doing late-night sessions with strange men (“It was a war!” she jokes), she’s had to prove time and time again that she is worth being taken seriously as a musician and artist. This, combined with a lack of knowledge about the music industry due to being from a small island, has prepared her for the necessary struggle to achieve her dreams. “I had to fight,” she says. “I had to quit my job and take risks. My strength is definitely my story. It’s not an easy road.”

For Navy, the sky is truly the limit. She’s been dreaming big since she was young, and now it’s time for her to go the distance. “No limits, quite honestly,” she says. “I don’t want any limitations. I just want to go as far as this thing can possibly take me.”