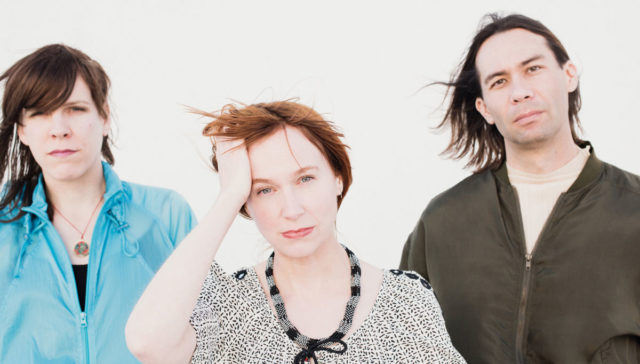 This week’s download comes from the group Rainer Maria and their new album “S/T”.  You have seven days to download their new song, “Suicides and Lazy Eyes.”

During the summer of 1995, Kaia Fischer, William Kuehn, and Caithlin De Marrais, collectively Rainer Maria, were getting their start as a band in the idealistic confines of Madison, WI, and the fertile incubator that was the Midwest’s ‘90s indie rock scene. A self-titled EP released in 1996 would be followed by signing to the then nascent Polyvinyl Records as a cornerstone for the label.

Playing countless basement shows and rock clubs across the country, the band cemented themselves as early ambassadors of the Midwest indie rock scene now so revered by later day musicians and fans. In 1999 they moved to New York City, and throughout the first half of the aughts, Rainer Maria would release three more full-length albums. Evolving their sound as they tightened their craft, the band continued to hit the road with opening acts ranging from Ted Leo and Rilo Kiley to the Yeah Yeah Yeahs before deciding to explore other avenues on their own.

A decade later, continuously adored by fans far and wide, Rainer Maria has reunited. Guided by their shared history as songwriters, and buoyed by their recent adventures and explorations in music and life as individuals, S/T fits like well worn boots with the spring of new soles.

You can see Rainer Maria in Milwaukee on Friday, September 15 at The Back Room @ Colectivo!