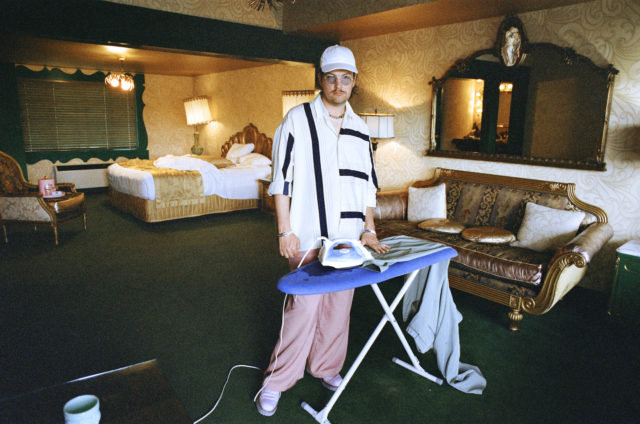 This week’s free weekly download comes from French-based producer, DJ, and musician, Myd. Myd is pronounced “Meed” like “Weed” and the latest single ‘The Sun’ is his newest release featuring vocals courtesy of US alt-pop JAWNY. Not only are we blessed with the new single but he dropped a mixtape for ‘In The Mix.’ ITM airs every Saturday at 10 pm CST with host DJ Kenny Perez. Peep the video, download the single and enjoy the episode below.

According to the press release:

‘The Sun’ is the new release by French indie-dance eccentric Myd – and features vocals courtesy of US alt-pop JAWNY. The single is out now via Because Music/Ed Banger Records.

JAWNY says: “The song is good, like, really fucking good, so when Myd asked me if I wanted to be on the remix I dropped everything I was doing and recorded my verse. Then we went to the fucking moon and kissed. It was fucking hot…reaaaally hot”.

The single was written, performed and produced by Myd – the Lille-born French guitarist, DJ, producer, songwriter and singer whose debut album ‘Born A Loser’ was released via Ed Banger Records last year. ‘The Sun’ originally featured on the album, but is seeing a rebirth this year thanks to Myd’s recent growing following in France – it was just classified as a Gold-selling single. Myd has also been nominated for a Victoires de la Musique Award (the equivalent of a GRAMMY in France), and will perform ‘The Sun’ live at the ceremony with JAWNY.

Myd’s debut LP ‘Born A Loser’ is a perfect representation of Myd, who takes his music very seriously, but not himself. It was praised by Loud & Quiet Magazine who said of the album: “Myd soaks our ears in a dreamy cocktail of breezy indie guitar licks, playful nu-disco beats and hazy vocal samples, mirroring his quirky, laid-back personality”, while Best In New Music praised the album for being “so full of life and energy and is a joy to listen to.” The album has been praised and supported by radio DJs such as BBC 6 Music’s Lauren Laverne, BBC Radio 1’s Annie Mac and many more including The Blessed Madonna, Pete Tong and Annie Nightingale.

The album comprises 14 tracks including the lead single Born A Loser featuring Mac DeMarco, where Myd flips Derrick Harriott’s vocals from the classic 1967 reggae record ‘The Loser’. Continuing his penchant for sampling on the album, Myd also samples The O-Jays’ iconic 1973 single ‘Now That We Found Love’ on his album track of the same name. Uruguay-born guitarist Juan Wauters adds an intimate, fingerpicking moment on ‘Forbidden’, and acclaimed British vocalist Bakar’s feature on ‘Got It’ rounds off the contributors on the sundrenched, kaleidoscopic album.