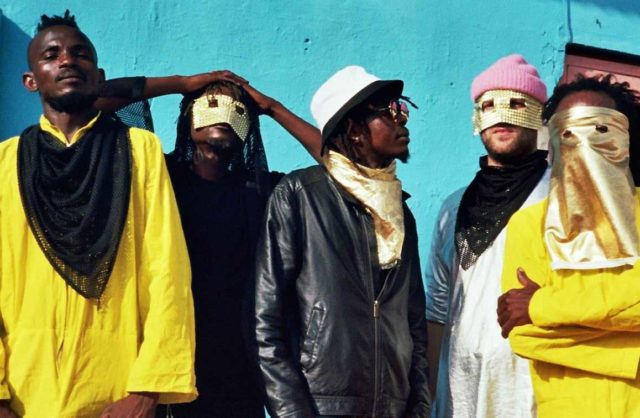 This week’s download comes from KOKOKO! and their latest release “Fongola.” You have seven days to download the song “Buka Dansa.”

KOKOKO! began in 2016 in Kinshasa. Electronic artist Débruit was in town working on a film soundtrack and began collaborating with Makara Bianko, a charismatic singer who performs with his dancers to electronic loops, and separately with a number of ingenious musical instrument creators and artists.

They threw a spontaneous block party, and though many of them hadn’t known each other previously, the energy really clicked between Makara Bianko, Débruit, Boms Bomolo, Dido Oweke, Love Lokombe and Bovic Mwepu (who has since passed away), and together they became the founding members of the group KOKOKO!, which is part of a wider collective of multidisciplinary artists.

Signed with independent label Transgressive (Flume, SOPHIE, Let’s Eat Grandma), their distorted polyrhythms and spontaneous lo-fi sounds provide a chaotic soundtrack to their home country. When most people think of culture in the Democratic Republic of Congo, it’s The Rumble in The Jungle fight of Muhammad Ali vs George Foreman and the accompanying Soul Power concert with James Brown in the ’70s, Mobutu in his abacost and leopard print hat, les sapeurs in their elegant tailoring, and the king of Congolese rumba Papa Wemba.

A faded vintage postcard. KOKOKO! represent the antithesis of tradition, and their debut album Fongola — which translates to “the key” — is a torrid, anarchic, youthful journey smashing a new path through modern life in Africa’s third most populous city.