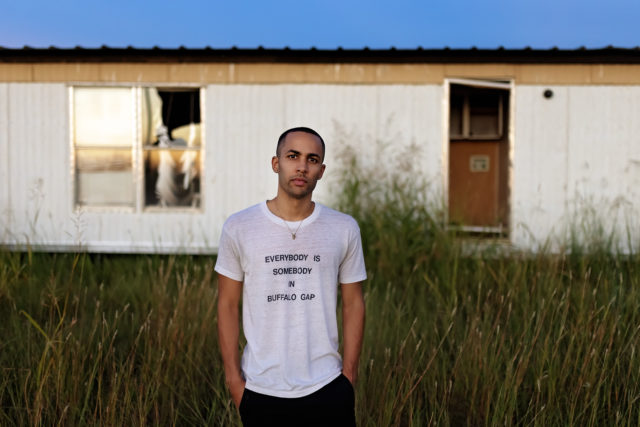 Rising LA-based, Abilene, TX-raised musician Plato III announces The Devil Has Texas, his first album out via Polyvinyl Record Co, due June 17. The free download “Sorry If I Dissed You” features the main sample from Modest Mouse’s “Trailer Trash”! More information and link to the free weekly download below.

According to the press release: With his music, the hip hop artist born Ryan Silva fuses his musical influences – from the conscious hip-hop of Black Star to indie rock icons Modest Mouse – with nimble bars and outlaw anthem guitars to guide us down the dusty streets and empty plains of his hometown of Abilene, TX. The specter of Abilene haunts the entirety of the Phillip Odom co-produced album: we are tumbleweed-ed into a realm of crabgrass browning under desolate skies, pitbulls slobbering behind rusted fences and doomed trailer park pipe dreams. Welcome to West Texas. “Hip-hop is so regional,” notes Silva. “I want to make a sound that feels like where I lived. I want to dig into my upbringing.”

Today, he also shares “Sorry If I Dissed You,” the latest single and video from the album whose mainline is a sample from Modest Mouse’s “Trailer Trash” and whose title is taken from its notable closing line. Notes Silva, “Modest Mouse was a big deal in our trailer park. A girl who used to drive me to school showed me ‘Trailer Trash,’ and it just hit. After listening to The Lonesome Crowded West, I just assumed it was about West Texas because it reflected everything I was seeing: the long highways of endless plains, the malls that were becoming ghost towns, and the hopelessness surrounding it all. I had wanted to sample it for a while but never found a way. I finally cracked the code though and used it to exorcise some of my own demons.”