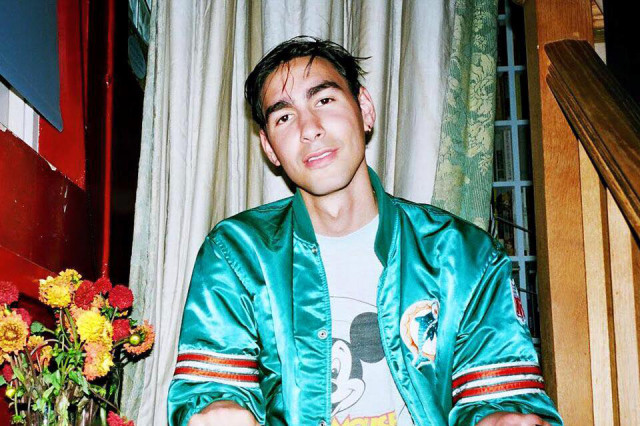 This week’s download comes from 23-year-old Oscar Scheller aka Oscar. You have seven days to grab his track “Sometimes,” which is from his forthcoming debut album, Cut and Paste.  The album will be released on May 13 via Wichita Recordings.

23-year-old Oscar Scheller AKA Oscar has cut a dash through indie music press in the UK and the US with his bedroom–recorded laptop pop  over the past year, so much so that in January he announced he had signed to legendary British indie Wichita, home of Waxahatchee, Girlpool and more.

A record collector and reluctant art school grad, he was literally reaching for the piano keys as a 6 year old on his Mum’s knee, growing up in a North London house where both parents where musicians that filled the air with the sound of Nirvana, Blondie, Kraftwerk, The Slits, Bach and lots of Blur. Dad was even a first wave rave producer.

Oscar’s first instrument was the piano. He studied composition. Then late in his teens he picked up a guitar and started trying to play it like a piano. Listening to The Radio Dept. –  a lot –  cemented his love affair with lo- fi. Just a guitar and Logic Express in his bedroom, self-producing a prodigious number of song. Realising his rich baritone voice was the perfect tool, he developed his soulful croon influenced by Bobby Soxer favourites Ricky Nelson and Buddy Holly as much as the oft cited Albarn, Merrit, Lekman comparisons. Meanwhile cut n paste techniques saw him pluck his favorite drum sounds for his tracks from gritty 90s East Coast hip hop; Buckwild, Erik N and Rakim, and Lord Finesse.