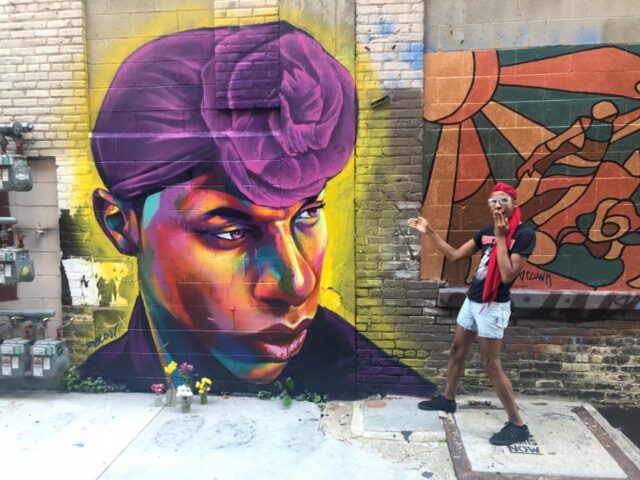 Black Cat Alley debuted its latest work yesterday: a vibrant portrait of Milwaukee singer Lex Allen. And as Black Cat’s Program Director Stacey Williams-Ng explains, the piece was a rather spontaneous addition to the gallery. Even Lex didn’t learn about it until Tuesday.

The portrait was done by Denver artist Detour, who was in town this week painting a monumental five-story piece in West Allis. Despite the heat, Detour worked fast, and his schedule left him with an extra day to kill in the city, so he reached out to Williams-Ng to see if there was another wall that needed a small mural. “He offered to do it free of charge, as a gift to the city of Milwaukee,” Williams-Ng says.

The piece came about quickly. The gallery had just one day to plan the mural and get permission from the East Side BID, not to mention from Lex himself. And although yesterday morning’s rain showers threatened to undo those plans, by the afternoon Detour was fast at work on the mural, which he finished in a swift three-and-a-half hours. “I just sat there and watched him paint from start to finish like it was a feature film,” Williams-Ng says.

So why Lex, of all artists? Detour is known for his portraits, and the gallery brainstormed several Milwaukee artists it might be fun to have him paint, but in the end they opted on Lex, a performer with a rare gift for making people feel good. “Plus he’s performed at Black Cat Alley, through our AlleyWayz series with Radio Milwaukee, so he has a connection to the gallery,” Williams-Ng says. “It just seemed like a natural fit.”

Williams-Ng says the new addition sets an exciting precedent for the gallery, which is carefully curated. “We have to tow a delicate line to keep people from just walking in there and painting whatever they want, but I do want people to know that while there’s a process, it can be a pretty nimble process,” she says. “This encourages artists to come to us and say, ‘we have an idea,’ and know that we can move forward with it.”