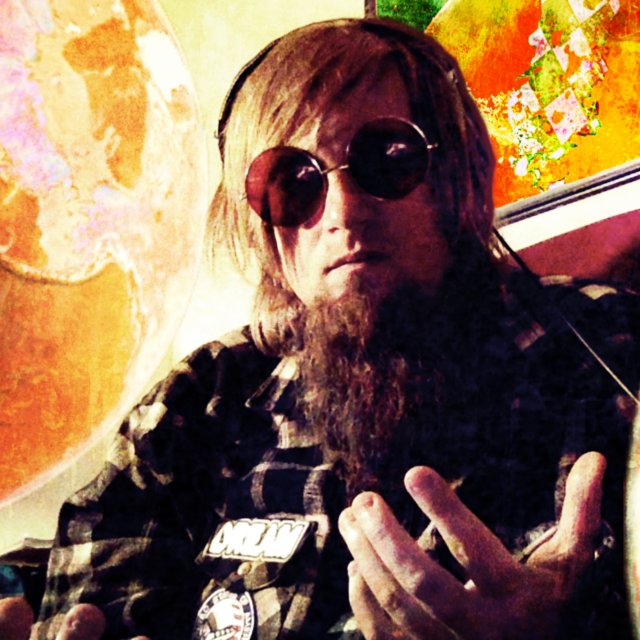 For today’s premiere, we’ve got a purposeful suite from the Milwaukee composer/art-rocker Dandin. Stream and read about “World of Angels” below.

I have a song that I have not released on any platform called “World of Angels.” This is a song from Fantasy Self, an album I’m working on that is part of the Manifest Lexicon ϝʂϝ100-Album Project. This song is probably the greatest representation of my work at this point, especially after being influenced by instructors and classmates at Milwaukee Area Technical College. There are piano melody and jazz qualities in the song I never had nor understood before MATC. I wrote the song while I was there, and I understand the song as everything I was hearing there at once; pianos, drums, guitars, and keyboards playing in separate classrooms, but then I’m able to record some of all of their influences together. I think I use music to integrate or harmonize external environments in my subjective vision. I’m always starting with disparate fragments.

The song is also a prayer, and I do feel that it has been already answered in many ways, in different modes of interpretation. I am a religious child, and I always have been. My music is very religious but also strange. I don’t remember what my childhood smelled like, but it was religious and strange. So maybe I do – let me think -Incense burning in a censer. All manner of burning things. And the smell of Polish-American basements. There is a certain smell that a large percentage of Polish-American basements have, as I experienced first in childhood and second in adulthood while seeing a far greater number of Polish basements, visiting estate sales.

This has actually been a very trippy question. Memories of scent are certainly triggers; smell is the most primordial sense.

55 of my albums were already released before I started studying music, but now that I’ve studied music from others, and accidentally studied a bunch of other stuff, including project management and Smart Goals, it’s a brand new game. There was never a schedule or a real direction for my music before. Though I do not think living with ambitious personal goal-setting is the only way to live, there is certainly a new kind of freedom that I have found in it. It certainly fixes issues with being too caught up in others’ affairs, trying to find personal direction in the direction of another person, which I have certainly done.

At this time I am mostly shut up inside recording, getting further ahead in the progress of recording, in case I get sick or am assassinated later on.I have to be dragged out of the house by friends to play shows, however I have been threatened with this, so it could start to happen again.

A few weeks ago, I was finally able to release a novella I wrote in 2009, and now I feel like I’m having a sort of 10-year Life Review or something. Ten years ago I was on album 27. Now I’m on 64, scheduled to finish 100 by May of 2022. I can view my life in a series of albums, back to when I was 14. Sometimes I’m writing about girls, sometimes I’m writing about God. It’s usually both. This has been going on since high school. And I suppose it’s smelled like incense and Polish-American homes the whole way.

I might be really feeling nostalgic since we’re at the end of 2019, and “Hindsight is 2020.” I think I’ve been preparing for 2020 to be a year of reminiscence for some time now; odd to plan to look backward, but perhaps there is some utility in it. That sort of phenomenon reminds me of a word a friend of mine uses – “Epipromethean.” “Backward-forward thinking.”