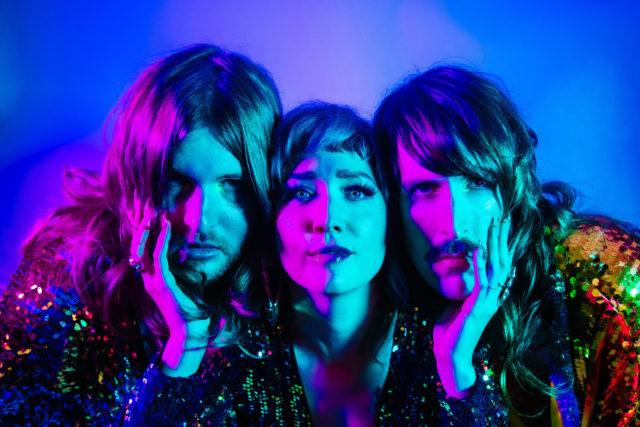 GGOOLLDD is back with a new song, pulled from the depths of hard drive failure and recorded on a Wisconsin farm.

“Superstar” brings colossal, driving bass along with shout-along vocals, punctuated with plinking synth and guitar. As the track builds to its final refrain, the guitar kicks up and rises to the top of the mix, like a rockstar slowly emerging from a beneath a festival stage on a platform, surrounded by fog and beams of light. The ascent slices the song like a saber, perfectly fitting for a band as glitzy and bold as GGOOLLDD. Listen below.

We do have some Milwaukee shows this summer! Brady street fest (7/31) and a club show at the Cooperage (8/19)

We actually had an EP ready to finish up right after our “Here We Are” album release show which was cancelled 3 days before happening due to COVID.

We were planning on releasing it in March, same day as the “Here We Are” release show 2 years later, but, alas, our hard drive broke and with no back up, we’ve been rewriting the songs from memory, which, I think are better for it.

We need these songs more now than we did then, and we’ve all changed a lot in the last two years. So now, in lieu of an album, we’ll be releasing the songs as they come, one at a time.

“Superstar” was written and first recorded on an biodynamic farm in New London, WI of all places. Irish Acres, definitely suggest checking it out.