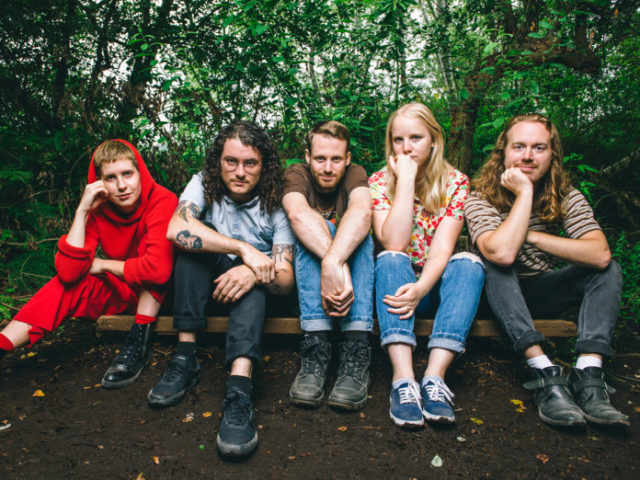 Great Grandpa’s sophomore album “Four of Arrows” has timing working both for and against it. The record arrives on the heels of a big year for another band that’s mastered volatile, folk-adjacent indie-rock, Big Thief, and while the comparisons between the two groups don’t do justice to the scope of Great Grandpa’s latest, the demonstrated appetite for music in this lane can only work in their favor. And the early buzz for “Four of Arrows” has been formidable. After a glowing profile, Stereogum sired the record as the site’s Album of the Week, and The Fader premiered it to high praise yesterday ahead of its Friday release. Other music sites have been similarly awed.

If this really is Great Grandpa’s moment, though, circumstances may make it a hard for them to fully capitalize on it. Last year bassist Carrie Goodwin left the band’s native Seattle for Milwaukee and a graduate nursing program at Marquette University. The band’s guitarist Pat Goodwin, her husband, moved with her; they wrote portions of the record here. Meanwhile, after years on the road promoting their debut album “Plastic Cough,” the quintet has decided to dial back how much it tours. “It’s hard to make money in the music industry as it is, but especially when you split it five ways,” Carrie says. “We’re not making enough money from touring to be able to sustain a normal and sustainable life.”

While less time on the road may be better for the band’s pocket books and overall mental health, it lowers their ceiling considerably in an industry where the only realistic path to success for an independent band is to tour to exhaustion. “Not being able to tour can feel like a death sentence for bands, because touring is such a part of the machine,” Pat says. “But I think we’re hoping that this record, with the internet and word of mouth, will be able to do what it needs to do without us being out playing live a ton.” He knows that’s not guaranteed, no matter how strong the album’s buzz is.

Nonetheless, “Four of Arrows” is a special album, one with the potential to introduce Great Grandpa to a much wider audience. It often sounds like the work of a completely different band than the one that recorded “Plastic Cough,” an entertaining but not especially profound album filled with peppy, alterna-grunge throwbacks. In the band’s early days, Pat says, their sound was frivolous by design. “The early Great Grandpa stuff was really just a side project,” he explains. “I’d been in a band for five years that I poured every ounce of emotional and spiritual energy into, so I was just trying to do something that was the antithesis of that, something fun and lighthearted and simple.”

It worked; listeners responded. But once Great Grandpa became the band member’s primary outlet, they stopped writing at a distance, and on “Four of Arrows” they committed to a much more personal, vulnerable approach. These songs bleed. The sweeping opener “Dark Green Water” and the writhing “Digger” both weaponized singer Alex Menne’s remarkable, serrated voice. From there the record cycles through several moods ranging from sobering and folky to bright and poppy without ever losing sight of big-picture concerns: estrangement, decline, family divides, the weight of the past and the lingering fear of peaking early.

The album isn’t all angst, though. There’s comfort here as well. “I get anxious on the weekends when I feel I’m wasting time/But then I think about Tom Petty and how he wrote his best songs when he was 39,” Menne sings on the rootsy confection “Bloom.” While Petty looms over the song as an aspirational example, the song’s audacious jangle splits the difference between Shania Twain and Third Eye Blind. With all due respect to Big Thief, you won’t hear that on a Big Thief record.

“Four of Arrows” really should sound more disjointed than it is, given how much emotional and sonic territory it covers, but it’s structured as a series of fluid suites, each with its own gravitational center. It’s not a record that can be summed up by any one song, which made picking a singles a challenge. Sequencing the record, too, was like solving a puzzle.

“We knew from very early on we wanted ‘Dark Green Water’ to open the record,” Carrie says. “It has such an enormous presence, and it has this soft opening that grows and brings you into the world we wanted to create. But we had a harder time picking the song we wanted to be the closer. Eventually we landed on ‘Mostly Here,’ which was on the first Great Grandpa EP and was actually the first song we wrote.

“We’ve played it at shows for years and we wanted to go a better version of it, one that represents where we’re at now,” she continues. “I think it’s cool that the last song on our new album is the first song we ever wrote. It’s such a cool way to show the journey we’ve been on as a band.”

“Four of Arrows” is out tomorrow. You can stream it now at The Fader.