Growing up with Milwaukee’s Negative/Positive

Growing up with Milwaukee’s Negative/Positive 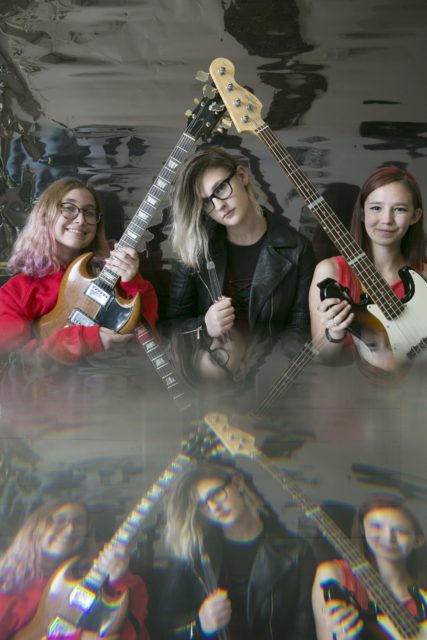 You may have seen the name Negative/Positive on local festival rosters and club bills this summer or heard their music over their six years of existence, but maybe you didn’t know the band members aren’t yet old enough to drive. It’s a struggle currently for underage bands in the city to have a stage to perform, and although Negative/Positive are booking club shows, they are coming-of-age in a music scene that caters more towards adults. They want their peers to hear their music — after all, it’s made for them.

It’s not that the band doesn’t have opportunities to perform, explains 15-year-old singer/guitarist Ava Gessner. “There are opportunities, we’ve played shows at bars before,” she says, “but it’s more that we can’t invite our friends unless they bring a parent. No one wants to do that. No kid is going to drag their parents.”

That’s why Gessner says she’s excited about The New State, the all-ages venue and community music hub that’s set its sights on a fall 2020 opening. Gessner serves on the Youth Engagement Advisory Committee for the venue. “I think it’s such a great thing because it’s not just a performance space,” she says. “There are going to be workshops and a recording studio.” When asked about her dream for Milwaukee youth, she says “The dream would be younger bands have the opportunity to play shows wherever, and there are always all ages opportunities, and there are also spaces like [The New State] to bring them up.” 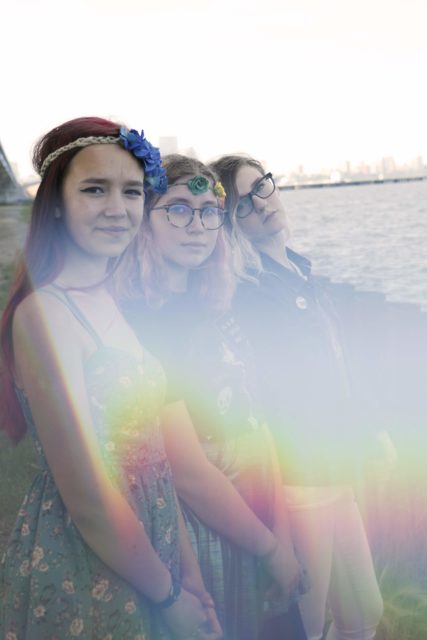 Much of the press coverage of Negative/Positive has focused on the age of the band, and understandably so — it’s hard not to take notice when kids as young as eight and nine years old perform with such a surprising level of confidence. Over time, however, their work and performance have evolved to the point of blending in with older contemporaries. Bassist Lola Flores points out, “I think the majority of people who listen to us are our friends or don’t want to offend us because we’re so young. I think people have a filter.” Gessner adds, “I haven’t gotten much critical feedback.”

As they’ve shed the novelty of their youth, it’s been interesting to watch the band grow literally and technically in their performances. As Gessner states, “I think we’ve become better songwriters overall. It’s a more collaborative thing; I’ve always been really interested in writing lyrics but now Ava [Antonie, drummer] is writing a lot of lyrics. It’s really fun being able to create better things together, we’ve definitely improved overall with that. It’s making songs I’m really proud of, songs that I want to listen to.” 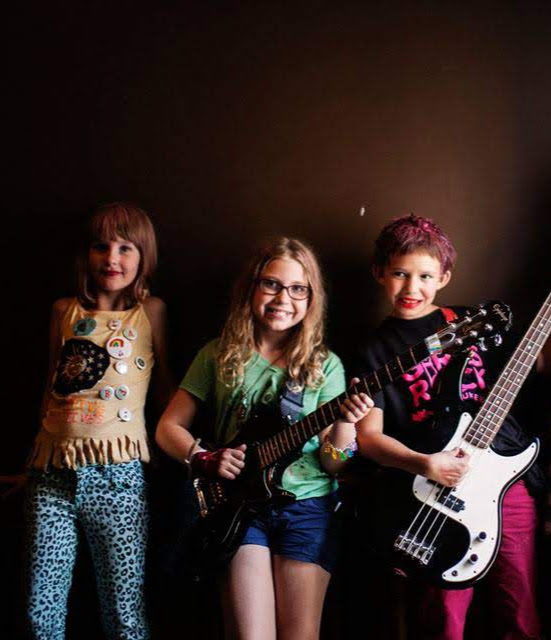 The lyrics feel really honest with a good dose of humor and it’s a great representation of coming-of-age in the current cultural climate. On the album “Kick Me in Both of My Shins at the Same Time,” released in January this year, lyrics cover the emotional rollercoaster of romance (“I Usually Take Death at Twice”), to homophobic bullies (“How Does One Walk Briskly Without a Back?”), to the cautionary tale of a depressed 30-something who chases attention from YouTube viewers only to end up more alone (“Brandon’s Song”).

When the band started, the lyrics were playful and goofy at times. While they haven’t lost their humor, their current work is more cogitative. “’Goodbye Douglas’ was completely fabricated and so was “Brandon’s Song,” but the rest of the songs were inspired by real life. “‘How Does One Walk Briskly Without a Back,’ there’s a whole specific story to that one,” Gessner explains. “It’s really important to me.”

It’s not always easy to perform personal lyrics. On performing for her classmates Gessner says, “When I sang ‘girl’ or ‘she’ for the first time in front of people at our school, I wondered if this audience is chill.”

“There’s always the fear that goes along with that,” she adds, “but it also pushes me. I don’t want to stay quiet.” She cites Hayley Kiyoko, a singer-songwriter who fans have dubbed “Lesbian Jesus,” as inspiration. “She inspires me to not keep things vague and quiet. Just tell the truth in your music.”

It’s really fun being able to create better things together, we’ve definitely improved overall with that. It’s making songs I’m really proud of, songs that I want to listen to. - Ava Gessner

Summer in Milwaukee has been perhaps the most visible time for the band, with more all ages opportunities and festival slots. When asked what the band is most looking forward to, Gessner replied, “I’m excited to learn more about music production. I’m excited for our show at Riverwest Public House. I’m excited to get back into playing shows more often. We spend a lot of time not playing shows and working on writing music. I’m excited to get more of our new stuff out there and to keep working on new material. We have a lot of ideas that are half-baked. We want to record a single and probably record a cover.”

To elevate their technical ability further, Gessner is enrolled in a pre-college program in Music Production at Brown University. “I definitely want to know what to ask for in the studio. It was really awesome recording with Shane [Hochstetler] and seeing how everything worked and to change it. But, I didn’t know much so I’d ask, “Can you get the sound different?” I always had trouble describing it. I want to know how it works, but it would be cool to record our own stuff. Also, being able to work in electronic stuff, like I got a synthesizer and I’m trying to figure out how it works but it’s so complicated. In general, I’m always looking for ways to make our music unique and branch out.”

You can see Negative/Positive Friday, June 7, at Riverwest Public House as well as at the Tonic Tavern 10th anniversary party Sunday, June 9.

Listen to the latest album by Negative/Positive, “Kick Me in Both of my Shins at the Same Time” below.