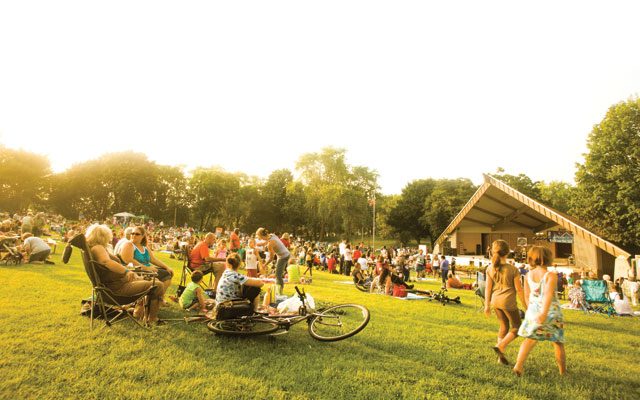 This summer see your favorite acts as they were meant to be seen: For free outdoors

OK, we get it. Our city has a lot of festivals and summer concert series. And maybe that’s because in Milwaukee we have to squeeze as much fun into the warm months as possible.

But regardless of the reason, we’ve broken down some of the free outdoor performances we’re looking forward to the most this summer so you won’t feel as overwhelmed trying to decide where to spend your time.

Jazz in the Park

Beginning May 30 and running until the end of August, the Thursday night concert series Jazz in the Park will return to Cathedral Square Park once again this summer. The lineup will feature a variety of jazz artists and bands including Josh Hoyer &  Soul Colossal on July 18, as well as a special Jazz DJ Night hosted by Brew City Bass with Plaid Hawaii Aug. 8.

Running from June 12 through Aug. 28, River Rhythms takes place every Wednesday and is always free and open to the public. Don’t miss artists like Bad Medicine, Leroy Airmaster and Cigarette Break, all of which will be featured at River Rhythms this summer in Pere Marquette Park.

One of the longest-running summer concert series in Milwaukee is Tosa Tonight. Tosa Tonight will host eight nights of music this summer from June 12 until Aug. 21. Hosted at the Rotary Performance Pavilion in Wauwatosa, the concert series will feature artists such as Roanoke, JC Brooks and Scott Mulvahill. And be sure not to miss 88Nine’s sponsored night July 24, which will feature The Foxies with Brett Newski & the No Tomorrow.

Hosted at Humboldt Park, Chill on the Hill will bring in more than 20 bands over the course of 13 weeks this summer. Running from June 4 through Aug. 27, there will also be food vendors from popular Bay View eateries and community partners. Don’t miss one of 88Nine’s favorite artists, Trapper Schoepp, who will perform June 18. And look out for a special World Music Night which will take place July 16.

Lake Park’s free Musical Mondays series kicks off its 22nd season July 8 with a performance from the celebrated Chicago folk singer Robbie Fulks. Other highlights include bluesman Kevin Gordon and his trio July 22, and Milwaukee acts including De La Buena Five, The R&B Cadets, SistaStrings, The Tritonics and Extra Crispy Brass Band. Shows take place 6:30-8 p.m. at Lake Park’s Summer Stage, unless there’s bad weather. In that case the shows will take place in the lower level of the Lake Park Pavilion, below Lake Park Bistro.

Beginning June 12, Washington Park Wednesdays boasts an impressive lineup for their summer concert series. Alternative rapper Zed Kenzo will perform June 26, on Venus Rising Night. Then later in the summer, don’t miss Doc B and Radio Milwaukee’s own DJ Bizzon as they perform for an Old School vs. New School Dance Party Aug. 14.