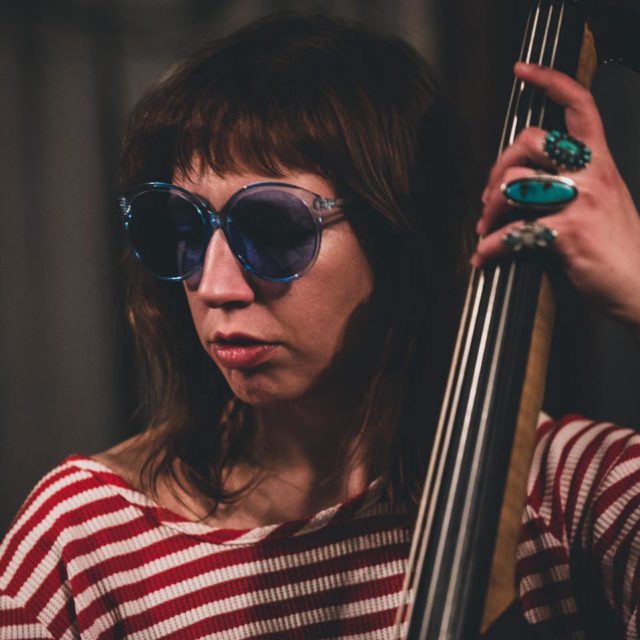 Like many Milwaukee musicians right now, Johanna Rose is trying to make the best of a bad situation. Unable to tour, she’s made herself at home in her Bronzeville confines, settling into a comfortable routine with her roommate. “We’re lucky to have a big garden that we never got to use before because I was always on the road, so I’ve been taking advantage of that,” Rose says. “We’ve spent a lot of time in the backyard, gardening and making fires.”

Of course, it also helps that she has a decent home studio setup at her place, and she’s been putting it to good use since the pandemic shut down Milwaukee. She describes recording now as a process of adaptation. “I’m mostly a bass player, so I’m used to playing along with other people,” Rose says. “But I’ve been playing a lot of piano and guitar now, because I have to learn more to play more solo instruments.”

In March, Rose released an album called “postponedalone,” a piano-heavy odds and ends compilation of demos and home recordings of material old and new. Some of these songs she’d been working on for a while in hopes of building an album around them, but after the coronavirus illustrated how quickly plans can change, it only felt right to release them as is. She’s a fast writer, anyway, so it’s not like there wouldn’t be more songs to come.

And sure enough, just weeks later, Rose returned this month with a new EP of songs mostly written during the quarantine, called “Only Good Nites,” that’s a good deal more polished than its predecessor. A decisive break from the traditionalist Americana of her folk duo Nickel&Rose, its opening number “A Nite Like This” may be the most expansive track she’s ever recorded, a blustery chamber-pop piece with shades of Screamin’ Jay Hawkins’ pressure-cooker blues. Nearly a dozen musicians contributed to the piece, which swells with horns, violins and a mini choir. “I was exploring how far collaboration can go in quarantine,” Rose says.

The EP marks Rose’s first attempt mixing in Logic (“I figured it was time I learn to mix in something a little more big kid than GarageBand,”) and she’s got a knack for it. You’d never guess so much of the project had been pieced together remotely; she credits Josh Evert at Silver City Studios for his work mastering the EP.

“Only Good Nites” was also an exercise in writing in the moment, something that Rose says has always appealed to her. “The second two songs on the EP are filled with quarantine references, where I’m talking about the new love language of going to the grocery store or that kind of thing,” Rose says. “I’ve always liked to write things that everybody can relate to, and what’s interesting about this experience is everybody in the world is sharing it. We’re all in this situation.”

The situation may be universal, but Rose’s perspective is unique, and she captures small, reassuring moments of human connection. On “The One That I Call” she basks in the simple, reassuring comfort of having someone ask if you need anything from the store. Despite the bleak times, the songs are filled with joy and levity.

“They’re like quarantine love songs,” Rose says. “I guess I wanted to bring some lightness into the world. They’re probably the closest thing to love songs I’ve written. I’ve never been a love song writer. I’m more of a ‘I’m devastated, my heart is broken’ writer. But I guess quarantining along and spending a lot of time with my pet snake and my garden has made me think that love is pretty nice sometimes.”

Stream “Only Good Nites” below.