You Should Know Field Report

You Should Know Field Report 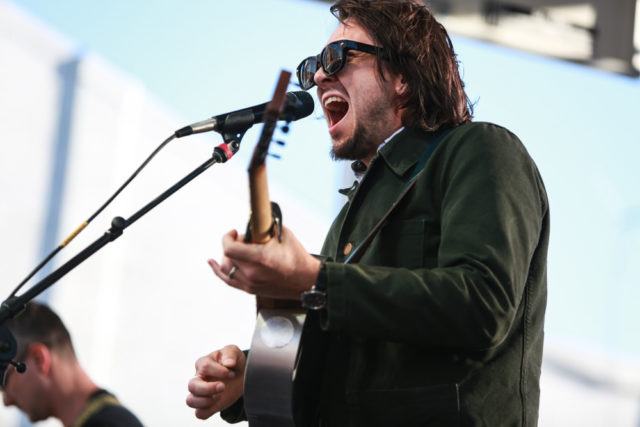 Radio Milwaukee recently caught up with Christopher Porterfield, frontman for Field Report. The band has a new album, “Summertime Songs” releasing March 23rd via Verve Forecast. With an expanded sound, Porterfield opens up about moving away from the auto-biographical to set the stage for a cast of characters and an album to dig into and discover.

1. Christopher, you are in a time in your life where you started a family, own a home, you’re sober, things sounds like they are going really well; but this new release covers some dark themes. Does it feel like a juxtaposition to call the new album “Summertime Songs?”

It’s definitely my version of a summertime record. It’s sort of having fun with that idea as far as what that is supposed to be, and what that’s capable of. I think it’s kind of a pop record with a lot of red meat still for earlier Field Report fans. You can kind of lean in with it, and you can lean back and rock out at times, too. It felt good to do something intentionally to have that duality.

We wanted to leave a lot of opportunities for the listener to discover. Our intent musically was to leave a lot of things open-ended enough where someone could climb in and use it as a tool for self-discovery, or at least some reflection. On the surface, it will totally function in the car in the background, but it thrives in a one-on-one, record-and-listener environment, too.

2. The characters in your lyrics have such a reality to them, it feels like they must be autobiographical in some way. Did you imagine yourself in scenarios and the way you would react? Or is it you empathizing with others?

Some of it starts with me, but as it develops, I discover maybe somebody else would have a better take on where I’m heading or where we’re going. A lot of this record is from the perspective of other people. I had a family member who was going through divorce and some friends who were breaking up. Having a look at the idea of love in various stages of its life, from both sides or multiple sides was an inspiring exercise.

Since I quit drinking, I’ve got more energy for empathy. It’s less about me wallowing in “what have I done, what have I become” and it’s more about “wow, life is pretty wild. There is a story everywhere.” This record is the first time very little was entirely about me. There are a lot of other people in this one.

3. This album is like a movie; you can see all these characters. A lot of it is bleak, but if I didn’t know you, I wonder if it would seem like you were going through ten really difficult scenarios.

I wonder about that. That’s a good point too, that it sounds like a movie. This album is most like a movie, compared to the other ones. A movie takes a ton of people and a lot of time. There’s lighting, a director, a producer, camera people, gaffers, costumes, actors, and all this stuff. I feel like this album is the first time we’ve had the time and the team to do that level of production. I think that level of production also informed how the songs were made and applied to it.

Records can be snapshots, records can be films, records can be a one-man play, or they can create an environment that you want to come into. I feel like this is the first record that really feels like we created a world from nothing, rather than documenting the world we were knocking around in.

4. You perform weekly as Argopelter, improv music group with a few of your bandmates. Has that project helped with your intuition as a group?

It’s been absolutely huge. Every time Barry [Clark], Devin [Drobka] and I get together, I discover something more about myself and about listening, creating, and trusting each other. Those guys are just so incredible. There is a lot of that sense of discovery that went into making this record. Intentionally leaving that time and space for those accidents. Responding to that in a further act of creation. That was definitely a big part of this record and a big part of our live show too, and how we all play together.

5. It seems like the vinyl version will be special?

Totally. I can’t tell you how excited I am for the vinyl to come out. We have to be present when they cut the lacquer and approve it. There is this dude in Middleton, who happens to have a $60,000 record lacquer cutter; one of only a handful in the world. Just happens to be in Middleton, in his basement.

Justin Perkins, who mastered our record and just about every record coming out of Milwaukee said, “You guys need to see Lacquer Dave.” So we did. We drove and saw Lacquer Dave. This record on vinyl is UN-BELIEVABLE. I couldn’t be happier with it. The sound of well-captured bass on an intentionally cut lacquer is just like seven dimensional, it’s crazy. It sounds so good.

Listen to “Never Look Back” from Field Report: