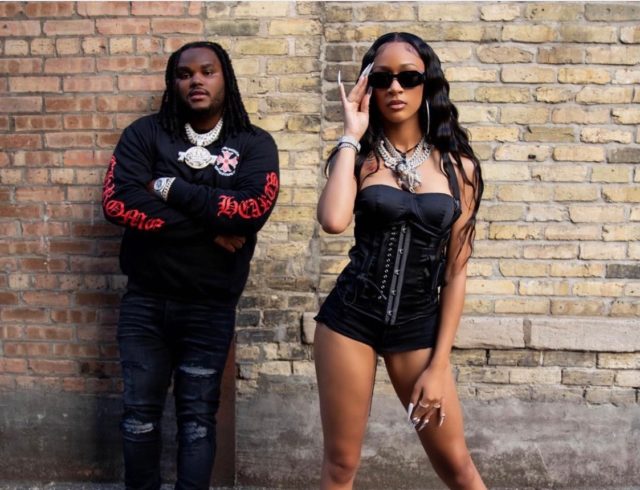 I’d assumed it was over when Lakeyah moved to Atlanta. Plenty of aspiring rappers relocated to Atlanta to further their career, but that city’s sound is so established and its music industry so all-powerful that it tends to erase any regional character those artists brought with them. Atlanta has a way of becoming a rapper’s identity.

But here we are, a year after Lakeyah signed to the city’s biggest label Quality Control, and if anything she’s leaning even further into her Milwaukee identity. Just take a look at the cover of her upcoming mixtape, “My Time”: There she is, in Milwaukee Bucks gear — the real-head Bucks gears, with the ’90s purples and greens — clutching a Championship trophy. That cover couldn’t scream Milwaukee any louder if it had a Gruber Law Offices ad underneath it.

And on the first single from the tape, “313-414,” Lakeyah leans into hear new role as Milwaukee’s ambassador, teaming with Detroit giant Tee Grizzley — a rapper whose influence in Milwaukee has loomed large for years (plenty of other Milwaukee rappers have tried to land a feature with him; Lakeyah was the first to do it). It’s not a phoned-in feature either. The two spar with each other, trading lines back and forth.

The track almost plays like a Milwaukee-centric sequel to Grizzley’s Chicago/Detroit Lil Durk team-up “What Yo City Like,” but even that description doesn’t do justice to how many awesome things are happening here. You’ve got a taut Reuel StopPlaying beat. You’ve got DJ Drama yelling motivational DJ Drama-isms (“ONLY THE STRONG SURVIVE, SINK OR SWIM!”) You’ve got a video filled with Milwaukee landmarks. And you’ve got bars. So many bars. “Know I’m rocking with the Bucks but if they want it I got hear,” Lakeyah spits.

Great stuff. Stream the view below.