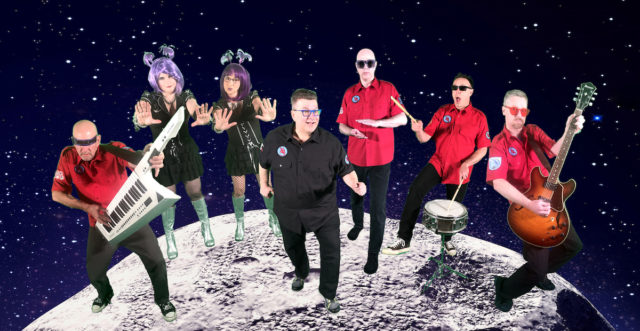 “Thrust” starts with a big ol’ bass lick, then driving drums, followed by a full-out rock ‘n roll-style guitar riff. You think to yourself, “Is this Foo Fighters? How did all this guitar get here?” But then, to your relief, come the synths. And they don’t stop until they fully propel you into space. (The first track on their forthcoming album “Ultra Cloud” is called “Take Off” after all.)

Mark G.E.’s vocals sound as good as ever, invigorated by the unusual-for-the-band rock rhythms. “Thrust” is the only track on the album like like it; the rest of the “Ultra Cloud” sticks to Xposed 4Heads’ bread and butter, a mostly computer-generated sound.

On the track, the surprisingly catchy lyric “Do you get my thrust?” is repeated enough times that you just might want to be careful singing along with your headphones on at work.

The next chapter in the continuing story of the Star Girls collaboration with Xposed 4Heads tells the story of the ‘StarTeam’ working to create the Ultra Cloud, a Utopian world for everyone.

With the universal language of music, the group collaborates to Take Off from Planet Earth with a new release of Glam Wave songs to dream of a possible future for everyone. On their past releases, Xposed 4Heads reach out of Milwaukee to interesting guest artists such as Deborah Evans, the iconic voice from The Flying Lizards (Money), Grammy winning Frank London from the Klezmatics and dirty bone player extraordinaire, Al Mothersbaugh (Cousin to the Mothersbaugh’s that created Devo), James Chance, notable co-founder of the No Wave movement and Blaine Reininger, co-founder of Tuxedomoon.

As the 4Heads planned the album, they were influenced by Outrun video game music, dystopian 80’s movies like Blade Runner and Tron, while continuing to move forward with positive lyrics about community, unity and togetherness.