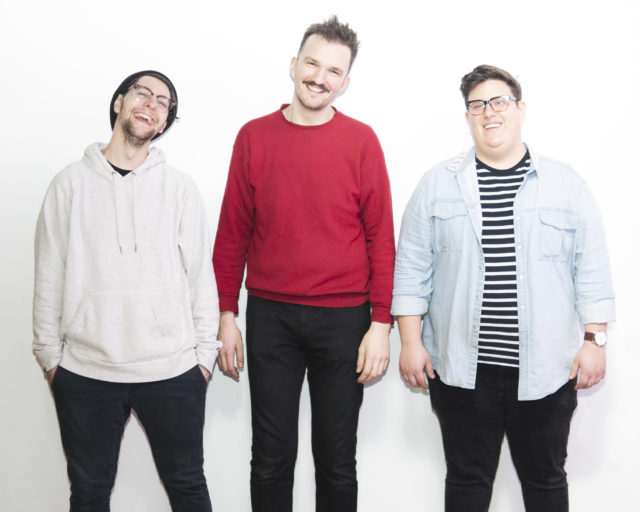 Originally a solo project from Jay Joslyn (also of Large Print), Lifetime Achievement Award has evolved into a three-person collaborative effort. Joslyn was playing with bands locally for some time, opted to explore complete creative freedom and decided to start this project as a pressure-free outlet. “I recognized the value of songwriting to my mental health, and I wanted to hone my craft,” Joslyn explains. He started writing and producing a song every week leading up to the 52-song debut “Today Hard, Tomorrow Hard.”

After the debut, Joslyn enlisted Alex Shah (who he played alongside in Ugly Brothers and Brunch Palace/Meat Greeter) and Grant Postier.

“In the year I was working on the 52 week project, I recruited Alex and Grant. In my mind, music was meant to be shared, so I wanted to perform some of the songs I was working on,” he said.

“When I finished the project, the three of us as a band recorded 10 fully fleshed out songs from the 52-week project with my childhood friend Jake Beyer. Since we released that record (“Reprise of the Hard Times”), I continued to write and releasing music under the moniker Lifetime Achievement Award.”

For their second album, “Music is a curse! Emotions are a burden!,” the Milwaukee group delves into self-reflection and emotional expression as a unit. It’s the first time the group merged the two worlds of Lifetime Achievement Award, the performing three-piece rock band, and Lifetime Achievement Award, Joslyn’s solo project. The record consists of a few songs the trio have been performing for a long time and a few songs they wrote together.

“Music has always been a tool for me to process my thoughts and feelings,” Joslyn says. “When I was a kid, I experienced some trauma that ultimately made me stunted emotionally. Anytime I’m stressed out or feel detached, it’s like there are two forces in my brain that can’t cooperate. In a lot of ways music bridged the gap between my daily routine and my inability to understand emotions in the moment. It’s like this: I write a song, listen to it a month later, and better understand where my head was at that time.”

While exploring thoughts and feelings has always been the M.O. for the group, this release is evident of their collaborative efforts and progressive evolution. Their genuine approach is on the forefront with a more cohesive and augmented sound.

With that level of transparency, however, comes vulnerability and irreversible disclosure. “It’s exciting and scary for me to let this project evolve. On one hand, it’s a lot of fun to perform with Alex and Grant, they are for sure some of my closest friends and it feels like we’ve all grown in our own ways being in this band. On the other hand, it’s easy for me to get in my head when I’m airing out my dirty laundry to the public. I try to remind myself that putting myself out of my comfort zone brings with it growth and change, so with that in mind, I’ll continue writing music with no expectation and navigate LTAA’s identity along the way.”

Lifetime Achievement Award will perform with Washer, Haunter and Cream Vellum at Quarters Rock ‘n Roll Palace on Thursday, July 11.  Listen to the album below.

“The music is a curse! Emotions are a burden!” is the latest release from the Milwaukee trio Lifetime Achievement Award and the first time the group has blended the band’s solo past and three-piece rock band present.